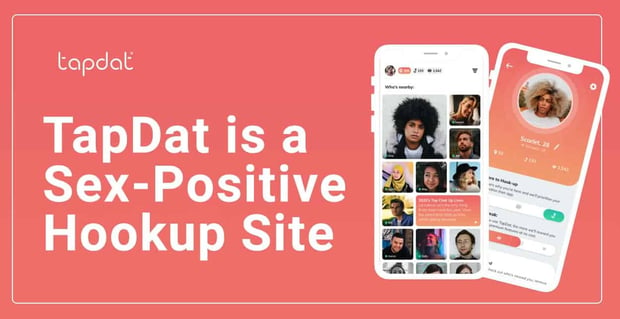 The Short Version: It takes courage for singles who want to hook up to put themselves out there. Some online daters feel uncomfortable with the raunchy environment of most casual sex apps, and they need a space where mature sexual connections can thrive. TapDat helps singles stay in their comfort zone and find local hookup options in the U.S., the UK, and other English-speaking countries. The cheeky, sex-positive app isn’t designed to create meaningful, long-term relationships. Instead, members can use its features to find someone for a fun, safe, and intimate romance.

The hookup culture started back in the 1960s but has found a resurgence over the last decade. Casual sex is now common and more singles are comfortable with uncommitted sexual encounters. Many singles on college campuses and in cities worldwide now seek those arrangements exclusively.

But confident and open communication is the key to a successful hookup. That doesn’t come easy for everyone.

Fortunately, the TapDat app makes it easy for sex-driven singles to find hookups without having to comb through raunchy content. The app encourages sex positivity and empowers all users to find what they’re looking for.

Connecting with someone for an evening involves understanding and respecting the other person’s expectations. TapDat makes those intentions clear so members can seek hookups quickly with people who have the same goals and interests. The platform aims to help users feel comfortable and safe from the start.

“Dating is hard enough. The last thing you want is not to match up with what you want,” said Alice Leach, TapDat Creative and Marketing Director. “Those kinds of issues can cause a long-term reluctance to get back on the horse. We’re trying to create an honest space where you say, ‘This is where I’m at right now — meet me here or move on.’”

On a Mission to Empower Sexually Active Adults

Alice said Rupert, the company’s founder, had been working outside the dating industry when he saw the lack of options for everyday singles who are looking to hook up. He brought his idea to a development team in the UK, and together they built his vision.

“We wanted to create an honest, open, and intentional space that felt warm and welcoming. Along the lines of what you’d expect from a traditional dating app rather than sexually explicit spaces that are potentially intimidating to shy introverts and bashful people,” Alice said. “He wanted to create that same space with a more gentle touch.”

Lead Developer and Chief Technology Officer James Skilton came up with the name TapDate as a throwback to the slang singles used in the 1990s. James has been instrumental in the app usability and design at every iteration.

Since TapDat started, it has evolved to meet user needs. Initially, it was designed for fast connections. Members could say when they were free, and fellow singles could reply if their styles and schedules matched. But the team rebranded the platform in February 2021.

“We’ve worked with our development team and rerouted the space to further the goal of making it welcoming,” Alice said. “TapDat is something you can absolutely share with friends and put to bed the taboo.”

A UK-Based company runs the app, which is available on iOS and Android, but the team works remotely. They frequently connect with check-ins and meetings but still respect each other’s private time. But there’s a strict no-contact rule — for work-related queries, at least — during the holidays, Alice said.

The reason hookups require so much communication is that everyone should be clear about a future without a romantic relationship. TapDat ensures users understand that connections through the app are between two single adults looking for attractive people to have fun with.

The app is best for singles in English-speaking countries, including the U.S. and the UK. Its hookup focus differentiates it from other dating apps on the market, through which many singles are looking for marriage. If one single is looking for a fun night while the other is looking for a relationship, there can be a lot of confusion.

“We’re a hookup app. Users can find meaningful long-term relationships on the app, but that’s not what we’re leading with,” Alice said. “We think it’s beneficial to all users if we can free other apps for other intentions and not have as many misconnections.”

Users have access to most of the features in TapDat for free without any subscription, and members can always message others. But for those looking for unlimited features, TapDat offers monthly subscriptions for about the price of a cup of coffee.

“We don’t think we will create the kind of community we want by keeping people out because they can’t pay,” she said. “We want people to be honest about their wants and needs and know how to communicate that effectively and have great sex in whatever capacity that looks like.”

TapDat Creates an Honest Space for Hooking Up

The TapDat team makes safety a priority. They have created a dating platform that facilitates successful hookups without publishing X-rated content, intimate details, or fake profiles. The app has a robust verification process that’s free for users. And in-house staff checks member photos to ensure they meet community guidelines.

“What you choose to do in the privacy of one-on-one conversation is your choice. We want it to be welcoming and safe, so you can sit in a coffee shop and scroll and not see anything that will raise eyebrows,” Alice said. “We’re asking people to lead with safe-for-work imagery.”

The team publishes an educational and fun blog that shares tips and tricks on intimacy, sexual health, and direct conversation. The platform also reviews sex products and lubricants.

A recent blog discussed the importance of STI testing and using barrier protection like condoms every time. The blog post shared how vital it is that everyone is vocal about their enjoyment of any activity.

“We can’t say it enough — it’s all about enthusiastic consent,” the blog reads. “All the time. So, keep being vocal, honest, and respectful. And make sure your sexual partner is doing the same. Safe sex is consensual.”

Alice said the team was proud of the safe space they’ve created and how members stick to the rules. As a result, everyone has a lot of fun.

“Seeing the number of messages go up is wonderful to us because we know we aren’t seeing users reported for misuse,” she said. “The messages are connections that real people are forging.”