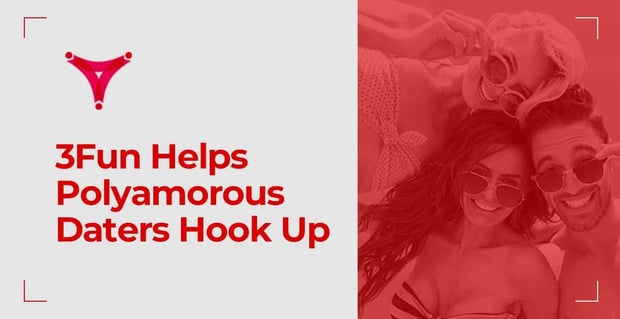 The Short Version: The mainstream dating scene can be a frustrating place for people who want polyamorous hookups and relationships. That’s why 3Fun launched in 2016. This niche dating app was designed exclusively for singles and couples seeking threesomes. Its synchronized chatting features help couples flirt with their matches in real time, and the 3Fun database includes over 2 million active daters who have high sex drives and low inhibitions.

The 3Fun app became a flirtatious hotspot in the U.S. during the coronavirus pandemic.

The polyamorous dating app 3Fun reported a surge in online activity in the U.S. during the spring and summer of 2020.

According to its internal data, the swinger app’s highest level of activity was in New York City, which was an early epicenter of the coronavirus. Over 22,800 New Yorkers used 3Fun to match and message date prospects while they were stuck at home.

Americans didn’t let the coronavirus stop them from connecting with new people and getting their flirt on. With 3Fun as a wingman, polyamorous singles and couples were able to pick up dates without setting foot in a crowded bar.

The 3Fun brand was started by a seasoned dating company that has successfully launched several other niche dating apps — but none with quite as saucy a premise as 3Fun, the dating app for threesomes.

Over 2 Million Users Are Online Looking for Threesomes

The 3Fun team is on a mission to introduce open-minded singles and couples in the hookup scene, and it has appealed to people of all ages, orientations, and backgrounds. The majority of its users hail from the U.S., the U.K., Brazil, and Canada.

Over the last few years, 3Fun has grown exponentially by capitalizing on the fun-loving spirit of singles and couples in the prime of life. It currently has more than 4 million registered users in its database. Couples and female users make up more than half of members, and the other half are single men seeking a no-strings-attached hookup.

All in all, 3Fun is a user-friendly dating app with the typical bells and whistles of online dating. The platform verifies that new members are authentic by asking for a phone number or Facebook account, and it requires them to upload at least one picture to feature on their dating profile.

“We encourage people to complete their profiles to show themselves and get what they are looking for on the platform out in the open,” the 3Fun team said.

The couples sign-up process is basically the same as the singles sign-up process — the only difference is couples have twice as many profile categories to complete (one for you and one for your partner). Couples must also disclose their relationship status, which will appear as a badge on their dating profile.

Couples can both download the app and use their shared account to flirt seamlessly. The 3Fun app syncs the couple’s matches and chats, so they will not miss a beat and can see their partner’s activity in real time.

“We are the first dating app to adopt a synchronization chat feature,” the team said. “All the couple’s chat history will be updated synchronously with one account. In this way, couples do not need to waste their time on chatting with the same users on separate accounts.”

Gay, lesbian, and straight couples are welcome to join the 3Fun network and use its interest-based matching and swiping tools to attract a lover who is up for just about anything.

Online dating safety is a huge concern in the polyamorous dating scene because people are putting their hearts, hopes, and sexual fetishes on the line, so they need reassurance that they won’t be catfished or scammed. The 3Fun team has gone to great lengths to verify all dating profiles and foster a fun, friendly, and safe environment.

As a vote of confidence, 3Fun offers a Verified badge to all users who have proven themselves genuine and active online daters. The Verified badge indicates that the photos and personal information have been double-checked by the app. So far, more than 1 million 3Fun members have verified their photos on the app.

By verifying photos, 3Fun can lower the chances of encountering a catfisher online.

The online verification process can help 3Fun users feel more at ease in the knowledge that their matches are who they say they are.

“I feel so comfortable, and that says a lot,” said Nelson R. in a five-star review of 3Fun. “It’s nice to see adults being adults while being respectful and, of course, consensual.”

The app’s privacy policy urges users to be cautious about the photos and details they share in their dating profiles. Users can choose to make certain photo albums private (meaning only matches can view them) and effectively hide naughty photos from the general populace.

The 3Fun team respects a user’s privacy and pledges to never share personal information to a third party without a user’s permission.

Additionally, 3Fun users can go into their settings to hide certain aspects of their profile and make it visible to matches only. For instance, if you’d rather the app not reveal your online status, your distance from another user, or your entire profile to random users, simply click a button and those private details will only appear to users who have earned your thumbs up.

Arranging a hookup with a stranger can be just as nerve-wracking as it is exciting, but a reputable dating app like 3Fun can offer safety features to help singles and couples feel more secure in their experience.

“User safety is always the key point for 3Fun,” the team said. “We will keep improving the app to provide better services for our users. We are currently working on some improvements to help couples use the app more effectively and safely.”

3Fun Can Spice Up a Person’s Sex Life

The coronavirus pandemic prompted a wave of changes in the social scene. Millions of people adapted to the new normal by using technology to stay connected. Instead of going on a first date at a coffee shop, singles started going on video dates, and instead of picking up dates at a bar, swingers began exploring polyamorous dating apps like 3Fun.

Since its launch in 2016, the 3Fun app has encouraged singles and couples to let go of their inhibitions and follow their passions in the bedroom. The polyamorous dating app has grown increasingly popular in recent months, and the team intends to continue building on that momentum by allowing active daters to arrange a hookup at home.