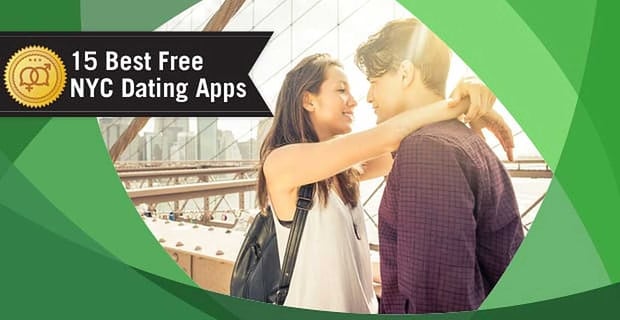 The best NYC dating apps allow singles to cut through the noise and find someone with real romantic potential.

More than 8.6 million people live in New York City, making it one of the largest cities in the world. People in small towns may think of NYC as a dating paradise — but locals know it’s not that simple. Singles in the Big Apple face a number of obstacles to getting a date. First, there’s the fact that everyone’s busier than ever. Dating is just another task single New Yorkers don’t want to add to their to-do list. Then you’ve got the fact that single women outnumber single men two to one in this competitive, cultured city. Those numbers don’t add up!

Dating apps are an obvious solution, but not all are created equal. Some dating apps serve single New Yorkers better than others. In particular, the 15 dating apps below have really made a name for themselves in this market. And you won’t have to shell out a bunch of cash to use them.

Zoosk is like the Empire State Building of dating apps. It’s historical, at least in the eyes of the internet (founded in 2007), it’s popular (30 million downloads on iTunes and Google Play), and it’s ginormous (40 million users). Plus, a significant number of its users live in large cities like NYC. You can sign up through Facebook for free, and you’ll start matching with prospective dates in minutes. Zoosk is offers a number of free features (including some messaging), so you can save your money for the actual date.

Match is like the Statue of Liberty when it comes to dating apps. It has stood as a pillar in the dating industry and welcomed the masses yearning to breathe free. Since it launched in 1995, Match has arranged countless first dates, inspired deep relationships, and distinguished itself as one of the best of the best. From the advanced matchmaking algorithm to the trendy features, Match lights the way for other dating apps to follow suit. The Statue of Liberty gets more than 4 million visitors a year, but it’s no match for Match — which gets more than 13.5 million visitors a month.

In terms of dating apps, Elite Singles is like the Metropolitan Museum of Art. It’s great for curious, adventurous, and mature people who are true romantics at heart. According to its internal statistics, over 80% of Elite Singles members hold at least a bachelor’s degree, over 90% are at least 30 years old, and pretty much all of them are interested in a serious relationship. On average, the Elite Singles app is responsible for 2,500 love stories a month.

We think of BeNaughty as the dating app version of Times Square. It’s teeming with all types of people from all over the world with all kinds of interests. You don’t need to be ashamed of being flashy and giving in to your desires — you’re around thousands of singles who feel the same way. BeNaughty takes things up a notch in the safety department as well. The hookup site uses SSL encryption to protect your information and prevent scammers from bothering users. A dedicated team verifies every person who joins, and you must have an approved profile picture to send messages.

Tinder is a dating app that could be considered the Grand Central Terminal in the online dating world. It quickly gets people from one place to the next — Grand Central transports 700,000+ commuters a day, and Tinder sees over 2 billion swipes a day and 1.5 million dates a week. Not to mention Tinder has facilitated over 43 billion matches since 2012 and is available in 196 countries. Its massive reach is perfect for the busy New Yorker on the go. And, unlike when you’re on the subway, everyone on Tinder is interested in meeting someone new and having some fun.

Sticking with the theme of this article, OkCupid could only be the Theater District of dating apps. It’s welcoming, entertaining, bold, quirky, colorful — and surprisingly smart in its approach to romance. The OkCupid team has calculated a formula for love by using a list of nearly endless personal questions, including “Do you like beer?” and “Are you more interested in love or sex?” This personality test drives the compatibility ratings across the online dating site and app. OkCupid also provides more inclusive selections for gender, sexual orientation, and relationship status than any other dating app — including non-binary, pansexual, and open relationship.

When we think of Plenty of Fish, we think of the Brooklyn Museum — both are perfect avenues for having conversations. In fact, POF says its users have more conversations than those on any other dating app. More than 1 billion messages are exchanged every month, and the app won’t ever charge you to communicate. Traffic is never a problem on Plenty of Fish either as more than 65,000 new singles join the app every day. Plenty of Fish is a great place to stop by, have a chat, and save some money while you’re at it, and you can rest assured you won’t be the only one trying to pick up a date there.

Chelsea Market and Coffee Meets Bagel are both all about quality — quality products and quality people and connections, respectively. Here, matches are called bagels, and you’re given a limited number every day. For men, it can be up to 21. For women, it’s the number of men who have already “liked” your profile recently. This quality-over-quantity approach was created by three sisters (who were single themselves at the time) in an attempt to save singles time and provide a more women-friendly dating app.

Coney Island is for diving head first into adventure, and Bumble is for diving head first into dating, especially for straight women. After a mutual match is made (two people swipe right on each other), the women have to initiate the messaging within 24 hours, or the match disappears forever. If you’re gay, lesbian, or bisexual, either person can make the first move. Don’t worry, though. Once a day, the online dating app lets you extend one connection beyond the 24-hour mark. Free via the App Store and Google Play, Bumble is “changing the rules of the game” by empowering single women to take control of their matches.

As Timeout says, the Chrysler Building oozes “a moneyed sophistication oft identified with old New York,” reminding us of a simpler time. Hinge reminds us of a time when dating wasn’t all about swiping and hooking up. The self-proclaimed anti-Tinder, Hinge is “inspired by love, guided by authenticity” and caters to those seeking long-term, monogamous commitments. One of the coolest features is that you can comment on people’s pictures and prompts as a way of breaking the ice, and you don’t have to pay anything to chat and match on the app. Hinge appeals to singles who are serious about settling down and want to have more interesting and engaging conversations right from the start.

At the Brooklyn Flea Market, you never know what special something you’re going to find, and on Happn, you never know what special someone you’re going to find. By mixing online dating with offline dating, Happn connects you with people who you’ve crossed paths with in real life. For example, if you and another member happened to be at the same café one day, the app will let you know. The mobile dating app will use your smartphone’s location data to let you know how many times you’ve crossed paths with this person. The rest is up to you!

Smorgasburg is like a food-only flea market, with 100+ vendors and all you can eat. Grindr is only for gay, bisexual, and curious men, and it’s all you can date. Known as the Tinder for gay singles, Grindr uses geolocation to recommend matches who are nearby, whether you’re at home, a restaurant, bar, festival, or anywhere else. Swipe right if you’re into them and left if you’re not. Grindr is a progressive, effective, and hookup-friendly app with free matching and chatting, but you can always pay to upgrade to Grindr Xtra and get more likes, ad-free browsing, and a passport for swiping outside your city or region.

HER is like the New York Botanical Garden of dating apps. While the 50-acre forest has thousands of beautiful flowers and other plant life to learn about, the Android and iOS app has thousands of beautiful people (both inside and out) to get to know. Created by LGBTQ+ people for LGBTQ+ people, HER is for finding friendship, community, dates, and relationships as well as LGBTQ+ news, events, polls, jokes, and almost anything else you can think of. Over 4 million womxn have joined the HER community so far, and it’s still growing!

When you go to the New York Library, you usually know what you want when you go there. Maybe it’s a specific book, or maybe it’s a program or event. When you sign up for BLK, the dating app for single black professionals, you know what you want. Members are busy and career-minded, but they’re also commitment-minded and desire a partner who has similar values, beliefs, perspectives, and interests. The BLK believes black singles deserve to be happy and feel attractive, and they’ll do whatever they can to help you meet singles who bring out the best in you.

If you like the furry friends at the Bronx Zoo, Bristlr could be the hipster dating app for you. Made for single guys with beards and “those who want to stroke them,” Bristlr was founded in 2014, has over 150,000 users (and counting) and is available in over 100 countries. The most important thing you should know about Bristlr is it has a beard-rating option, which you can use to find out how well a match’s beard ranks compared to others. If you’re a man with a beard or a woman who likes some bristles on a man’s face, you’ll feel right at home on Bristlr.

Dating in the Big Apple Has Never Been Easier or More Fun!

New Yorkers are a one-of-a-kind group, and they deserve a one-of-a-kind dating app. The best dating platforms cater to your lifestyle and needs, so finding a date is no longer a hassle. Thanks to the 15 options we just told you about, dating will no longer be something you have to do (like working out, going to work, and shopping for groceries). Instead it’ll be something you want to do!