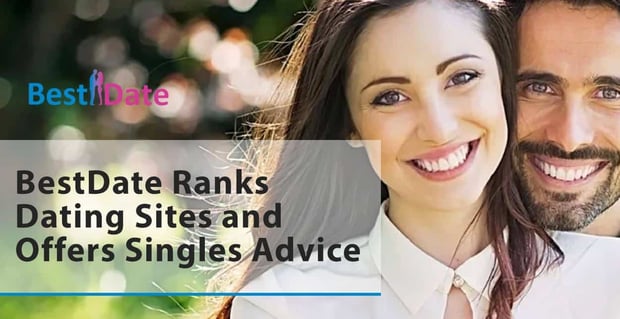 The Short Version: Anyone who has tried online dating knows choosing the wrong site can be a frustrating waste of time. Fake photos, inactive profiles, and singles wanting different types of relationships can make it challenging to connect with genuine matches. BestDate helps by ranking dating sites and apps based on feedback from real customers. The platform also publishes blogs that offer advice on how to capture the attention of other attractive singles.

Singles can start with the numbers if they want to understand the world of online dating a little better.

More than 44.2 million people actively use online dating platforms in the United States, according to Statista. Among those, 26.6 million singles use dating apps on their mobile devices. That makes for thousands of downloads every month of sites including Tinder, Bumble, Match, and eharmony, among many others.

Nearly one-third of the singles Statista surveyed reported using online dating more during the COVID-19 pandemic than they had in the past. That means more people are active and looking online, evidence that any social stigma associated with dating websites and apps is gone.

BestDate is a dating platform review site that takes those numbers into account in its rankings.

But numbers alone don’t answer the common questions singles have, including: Which dating site is best for crafting a compelling profile that shows different sides of my personality and hobbies? And where can I meet compatible singles in my area?

BestDate aims to answer those questions for singles. Leonard Welch, Spokesperson for BestDate, said the BestDate team is constantly reviewing new and popular sites to rank the best platforms for singles.

“We add new ones that deserve our attention all the time. Also, we remove the ones that went out of business,” Leonard said. “The most important part of the project is to verify real customers with real experiences so other readers can trust their opinion.”

Leonard said the dating review site has two co-founders, Oleg and Alex. Oleg, who is an experienced author and copywriter, has a degree in sociology and psychology. Alex, meanwhile, has a background in search engine optimization (SEO) and programming. The two friends were in a pub back in 2013 when they came up with the idea for the website during a conversation about modern relationships.

They enlisted the help of their friend, Nadine, who started checking out different dating services and creating the outline the site uses to rank the key features of each platform.

Today, BestDate has a team of 15 people, plus several authors who write occasional advice blogs. The company has two departments: a technical side and a content management side.

Several people focus on site support and maintenance, while others are focused on partner relationships or creating new content. Some team members serve as outreach specialists to help with guest posts and ensure visitors around the web can find the site’s content.

Sometimes, the team gets feedback from users through the BestDate Facebook page. Many have found success in online dating thanks to the information they learned on BestDate, Leonard said.

“We even get requests from readers to recommend certain services for their particular cases,” he added. “We try to direct them to the websites that we think will work perfectly for their needs.”

The goal of the site is to provide a centralized location that offers independent rankings so people can see the pros and cons of each site before they sign up. It’s easy to browse through sites by niche, including free sites or those focused on gay dating, as well as look for sites by their overall ranking.

All Site Reviews Are Independent and Up To Date

BestDate designed its review process to be straightforward. That means readers will know what to expect, and authors who contribute to the site will find a streamlined content system.

“Our authors have a checklist they follow. It includes technical, ethical, and functional things,” Leonard said. “It may remind readers of restaurant auditing.”

The reviewers even get a budget of between $50 and $100 to test the premium services on each site. That way, authors can test the functionality to ensure problems don’t arise for users only after they’ve paid for a subscription.

Some sites offer additional services, but only after the account has been active for a certain amount of time. When that’s the case, BestDate representatives reach out to the dating site to preview those services. Otherwise, the platform just waits until an author can access the entire site before posting the review.

Many singles rely on BestDate to get an independent look at what to expect from the different sites and apps. Readers from all over the world visit the site, and they come from a wide age range. Leonard said there are slightly more men than women on the site, and most users are between 30 and 45 years old.

Since the content is in English, most visitors hail from the United States and the United Kingdom. Still, the platform offers helpful information for singles throughout the world.

Leonard said that the team plans to improve the site by including a forum that readers can use to share experiences and post their own articles. That additional service can connect singles in a new way.

“They will have an opportunity to interact with each other, not only with the site itself,” he said.

Those interactions may have some singles wondering about etiquette and other common questions people ask when they start dating. Visitors can get information on topics like those on BestDate’s blog.

One blog post focuses on giving men advice on the best way to start a conversation with a woman. Frequently, men will get nervous and talk a lot about themselves — and that can easily backfire. Women usually like it when a man wants to learn about what makes them unique.

Asking a woman about a project she’s been working on or the highlight of her day are open-ended questions that give men an opportunity to listen on a deeper level. When meeting a woman at a bar, asking her if she likes the music or if she has a drink she’d recommend shows respect that not every man offers.

The blog also offers tips to help singles use dating sites safely, which is a big issue as more people find love online. BestDate ensures each site passes many safety checks before it makes the list.

“To gain the trust of their victims and establish better emotional contact with a person they are chatting with, scammers use emotional appeal,” the blog reads. “Do not trust strangers. The sad truth is that we often get fooled by people whom we think we can trust and rely on.”