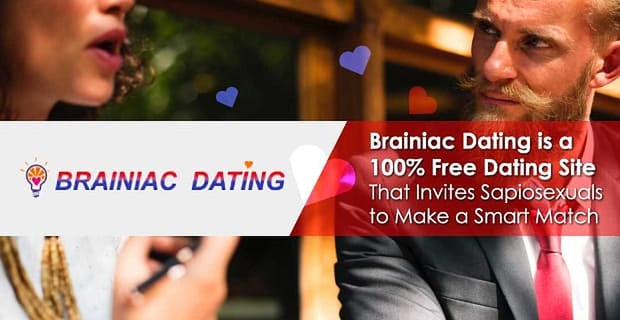 The Short Version: People on a general dating site aren’t always the sharpest tools in the shed, and that can be vexing to online daters with high IQs and high dating standards. Singles looking for a robust conversation often feel dissatisfied by superficial swiping tools and pricey chat features, so they turn to niche dating sites like BrainiacDating.com for a more targeted and cheaper dating experience. Since 2008, this global dating platform has helped brainiacs meet one another using targeted search tools. In 2013, Founder Lawrence Chernin removed the site’s premium membership plan so that all members can message one another for free on the site. This niche online community currently includes over 44,000 members worldwide and fosters deep connections by encouraging smart people to share their interests and passions. Single men and women can sign up for Brainiac Dating to meet intellectually curious date prospects who believe romance starts in the head rather than the heart.

In October 2008, Lawrence Chernin created a dating site for exceptionally brainy people, which he appropriately called Brainiac Dating because he wanted to empower intelligent daters to find one another. He intended to build something that would work for smart singles, and he hoped it would work for him as well. Once it launched, Lawrence joined his own dating site and started using it to search for an intellectually stimulating relationship.

This brainy programmer ended up meeting his future wife at a Brainiac Dating event that he had organized for local members. She wasn’t a member of the site, but she was a proud intellectual, so they hit it off, started a serious relationship, and became the dating site’s first success story.

Lawrence now runs Brainiac Dating in his spare time — which is how he has kept it 100% free to use — as a way of helping people get in the right headspace to find love and happiness.

Intellectually curious individuals can seek out new relationships on BrainiacDating.com.

Since its launch, the niche dating site has built a membership base of over 44,000 men and women from all walks of life. Brainiac Dating has members around the world, but the site is particularly popular in North America. In fact, about 80% of users are in the US. Over the last decade, the site has grown by word of mouth and welcomed singles of all kinds.

Anyone who’s tired of seeing misspelling in dating profiles and one-word answers in private chats can join Brainiac Dating to up the caliber of their online matches.

“There is no test or requirements to be admitted to the site as there are many ways to define a brainiac,” Lawrence explained. “Most members have college degrees, and 21% have advanced degrees, but many famous brainiacs, like Steve Jobs, Bill Gates, and Mark Zuckerberg, are college dropouts. Brainiacs can be the person next door, and you may never know it!”

Over 44,000 Members Connect on an Intellectual Level Online

The word that best describes Brainiac Dating members is sapiosexual, which means they’re people who think a high IQ is a turn-on. Sapiosexuals are attracted to big brains, not big muscles, and they value intellectual compatibility just as much as physical chemistry. If that type of dating environment sounds intriguing, Brainiac Dating may be for you.

The average age on Brainiac Dating is 40, so the dating site has a mature atmosphere enriched by a variety of experiences and perspectives.

It’s free to create a profile and use the straightforward search and chat features on BrainiacDating.com. The dating site does not have a paid subscription plan or token system. Members can add up to 15 photos to their profiles and fill in responses to prompts about their passions, favorite writers, favorite games, ideal first date, and personal story. Members can also choose to tag certain interests (including astronomy, philosophy, literature, technology, and visual arts) and search by tags to find companions with similar inclinations.

“It’s not just a swipe-left or swipe-right interface,” Lawrence said. “You can actually get to know a person by reading their detailed profile, which can contain a list of favorite books and hobbies.”

Brainiac Dating’s detailed profiles foster deeper connections because singles can actually get to know each other before diving into a conversation. After reading someone’s profile, blog, and poems, members have a foundation of basic stats and fun facts to pull from when coming up with icebreakers in the chat. Members can even ask a question on their profiles and invite responses to thoughtful inquiries like “Star Wars or Star Trek?”

Another unique feature on Brainiac Dating is the ability to earn and add badges to your profile. The badges recognize new members, members who have recommended the site to their friends, and members who have earned high scores in the Brainiac Trivia Challenge or Master Theorem Puzzles, two addictive online games offered on the site.

Brainiac Dating serves its eclectic community of singles with an abundance of search tools, an in-depth profile, and member blog sections to allow individuals to explore the dating scene at their own pace. The site is continually growing, learning, and improving alongside its members. For instance, Lawrence said he’s currently brainstorming new features to satisfy members who are interested in meditation and spirituality as well as intellectualism.

Many popular dating platforms run into a problem when it comes to authenticity. As the site grows in membership, it may pick up some fake profiles made by people with less than honorable intentions. Policing a profile’s content and photos and ensuring that everyone is who they say they are, however, is no easy task for dating sites operating on a national or international scale. So sometimes singles have to wade through inactive or inauthentic profiles to get to the good ones.

Fortunately, Lawrence has taken a proactive approach to policing Brainiac Dating to give his members peace of mind. He wants every profile posted on his site to reflect a real person looking for a real relationship. The site reviews all new profiles and approves them to be posted on the site within 24 hours of creation.

“We remove members who are unfit to date as described in the terms of use.” — Brainiac Dating

“All the profiles are real,” he promised. “I’ve devised Artificial Intelligence techniques to weed out the scammers and fake profiles.”

Brainiac Dating has built-in verification tools, and it also gives members control over who can send them messages. The dating site does not allow online harassment or spamming to take place on the site. Members can stop specific members from contacting them by clicking the “block contact” button on the profile page. They can also set general filters regarding age or education that will keep undesirable date prospects from sending them messages.

“I want the user experience to be as good as possible,” Lawrence said, “and this is one thing that I am most proud of achieving.”

Brainiac Dating started because of one man’s desire to find a partner, and it has grown into an international network with tens of thousands of members. Lawrence began with the theory that he could foster deep relationships by connecting singles who value intellectual curiosity and esoteric knowledge. The testimonials written by happy couples provide compelling evidence that his hypothesis was correct.

Susan joined Brainiac Dating in 2010 after seeing an ad for it on Facebook. She gathered her courage and sent a message to David on Valentine’s Day — and he immediately sent a response. They’ve been together ever since. The couple wrote to Brainiac Dating to announce they were engaged to be married and to thank the team for making their romance possible.

As you’d expect, the couples who have met on Brainiac Dating are wonderfully eloquent about how the dating site has changed their lives. One woman named Eliora said she has been in “sapiosexual bliss” ever since she met a genius man on the website.

“After years of trying every dating site with absolutely no luck, I met my life partner on your site.” — Eliora, a Brainiac Dating member

“I was just looking for someone with half a brain to have a nice over-dinner conversation with,” said Bette, a New York resident who met her boyfriend on Brainiac Dating. “Not only did I meet an intelligent, genuine, sweet, and handsome man…I met my soul mate!”

“Thank you for creating this site,” wrote a user who goes by ZeroPressure on Brainiac Dating. “I’ve been on for almost a whole day, and I’ve already made several interesting contacts.”

Lawrence began developing BrainiacDating.com to meet the needs of highly intelligent singles, like himself, who wanted to meet a smart romantic partner. The singles on this dating site are looking for someone who can sustain an interesting conversation about literature, technology, politics, and other intellectual subjects. Over the years, Brainiac Dating has facilitated thousands of connections between singles from all walks of life.

Brainiac Dating is a quality dating site for anyone who enjoys the intellectual side of life. Whether you’re working on your PhD or you dropped out of college, you can create a profile and start mingling here for free. You don’t have to pass the Mensa IQ test to qualify as a brainiac in Lawrence’s book.

“It is not just about education and having a high IQ,” Lawrence said, “but more about learning and being open-minded. So anyone can join.”