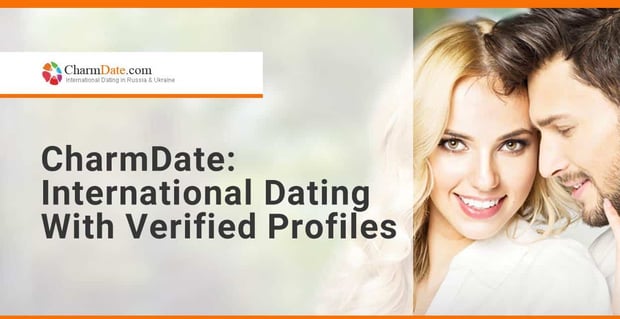 CharmDate is an International Dating Service With Verified Profiles & Matches

The Short Version: CharmDate has made it possible for Western men to meet Eastern European women from the comfort of home. The international dating site offers streamlined search tools and supports online messaging, letter correspondence, voice calls, and video chats that help cross-cultural relationships blossom. Marriage-minded singles can use CharmDate to expand their search for a potential partner and overcome obstacles in the name of love.

How far are you willing to go to meet the right person? Some casual daters aren’t even willing to travel across town for a coffee date. But a growing wave of serious daters have proven eager to hop on a flight and cross international borders in hopes of meeting that special person.

The online dating world can give singles the ability to reach compatible people in different countries, and CharmDate has distinguished itself by bridging the gap between singles in the Western world and Eastern Europe.

CharmDate launched in 1998 to create relationships between people from different dating cultures. Its online services connect single men with beautiful single women who live in Russia and Ukraine.

Joining CharmDate is free, and members are under no obligation to upgrade to a paid plan. The dating platform offers a pay-per-chat system that encourages users to follow their own inclinations and desires at will.

CharmDate is run by the same team that owns and operates AsiaMe and LatamDate, so it has a vast network and sophisticated tools at its disposal.

“CharmDate.com is a premium international dating site connecting beautiful Russian and Ukrainian women with men from around the world,” the CharmDate team said. “CharmDate’s mission is simple, which is to provide members with safe, easy-to-use, and professional services for seeking a serious relationship.”

It takes less than a minute to complete a CharmDate profile and gain access to its online community. The dating service sticks to the basics and dispenses with complicated questionnaires or off-the-wall prompts. Singles describe who they are and what they’re looking for in clear terms on the CharmDate profile, so there won’t be any guessing games or mixed messages. Singles can even indicate if they’re willing to relocate for the right match.

CharmDate offers search features based on age, gender, appearance, and other demographics to make it easier for singles to find their special person.

The majority of male users on CharmDate hail from the U.S., Canada, or Europe, while the majority of the female users are from Russia and Ukraine. Despite their cultural differences, these two groups have one important thing in common: they want to get married and have a traditional family.

CharmDate members can send an introductory message (aka Admirer Mail) for free.

“At CharmDate, thousands of attractive, sincere women in Russia and Ukraine are looking for serious romances and relationships,” the CharmDate team told us. “They are beautiful, loyal in a marriage, and also care about their families.”

International dating services can sometimes get a bad reputation for offering single woman ads that don’t represent a real person. But CharmDate has built an environment of greater trust and authenticity. The CharmDate team takes extra steps to verify its members and make sure fake profiles have no place in the database.

“We have members in various professions, including but not limited to financiers, lawyers, teachers, doctors, and consultants,” the CharmDate team said. “We use an advanced fraud-prevention system and online-purchasing system that’s protected by the world’s leading certificate authorities.”

CharmDate members have many communication features to help them get in touch with a potential love interest. Their connection can start with a private messaging chat and then move on to a video date through the CamShare feature or a real-time conversation through the Call Service.

Members can also show their affection by paying to send gifts and flowers to their international sweetheart.

“As a result of the market-leading growth of CharmDate, we currently employ different professionals to ensure the best possible online service and support,” according to the dating website. “From programmers and designers to marketing and customer service, CharmDate provides its members with the ultimate in online dating.”

Over the years, CharmDate has earned praise for its trustworthy services and Client Protection Policy. The company does not toy with emotions by only supporting online chats. It has been known to make real-life introductions that have led to marriages.

CharmDate has successfully paired many members in happy relationships. Some have even started families as a result. The CharmDate team has gotten feedback and testimonials from former clients that speak to its potential to change lives.

David and Oksana met on CharmDate and spent hours chatting through the service. Oksana said meeting David was the best birthday present she could ask for because it led to the kind of loving relationship she’d always wanted.

CharmDate has supported international love stories that wouldn’t have been possible otherwise.

Soon after their flirty chat, David traveled to meet Oksana in her hometown and get to know her better. The couple shared similar values and connected on an intellectual and emotional level.

“It was the most romantic period in my life,” Oksana said. “He takes a special place in my heart.”

Another couple named Martin and Valeria wrote to CharmDate after tying the knot thanks to the introduction service. They fell in love quickly and got married within four days of meeting in person.

“I feel like I am still in a dream,” Martin said. “If you are looking for the perfect woman, then you have come to the right place. I hope I do not wake from this dream.”

Most online dating apps prioritize location-based matching and put distance parameters on all members. The hope is that the user’s perfect match is right around the corner, but that isn’t realistic for everyone. International dating platforms like CharmDate provide a broader scope and a more diverse database where singles can travel as far as they wish to find a loving partner.

CharmDate has charmed countless singles with its profile searches, photo galleries, and dynamic chat tools. It’s a go-to resource for international daters who want to get married and don’t see distance as a dealbreaker.

To date, CharmDate has over 100,000 followers on Facebook, and it is constantly growing its reach in the U.S., Canada, Europe, and other parts of the world.