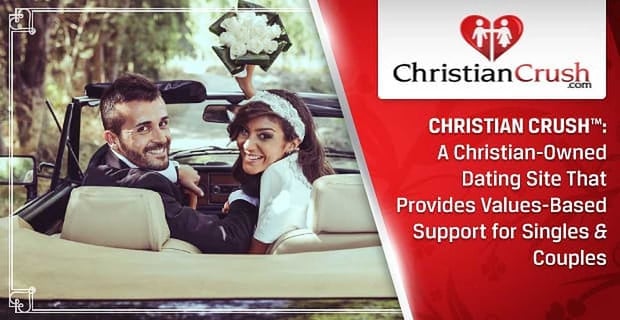 The Short Version: ChristianCrush.com is a dating site and marriage resource that caters to the Christian community. Founder Wyatt Fisher said his motivation for launching Christian Crush in 2011 was his dissatisfaction with the niche Christian dating networks in existence at the time. His high-integrity dating site vets all new members through a rigorous application process and a personalized ID check by the Founder himself. Christian Crush also promotes helpful resources, including seminars, therapy videos, and retreats, for couples experiencing relationship difficulties. Whether you’re struggling to meet new people or battling porn addiction, Christian Crush is there with knowledgeable guidance and a faith-based approach to dating.//

In 2011, Wyatt Fisher launched ChristianCrush.com because he realized there weren’t many Christian-owned dating sites for singles who wanted a partner of faith. He envisioned his site as a sanctuary for single Christians struggling to date online.

Within six months, one of Wyatt’s friends told him he had met a remarkable woman on the site. The only problem was she lived in Asia. Over the next several months, the couple kept in close contact and even flew around the world to meet one another on multiple occasions.

“Against all odds, they struck up this relationship,” Wyatt recalled, “and now they’ve been married five years. It’s amazing to see that happen.”

Wyatt told us that first success is still one of his favorite stories because it shows what Christian Crush can do for singles who share the same faith and values. Since they lived on different continents, I think it’s safe to say Wyatt’s friends never would’ve met and fallen in love if not for his dating site.

Wyatt has earned his doctorate in clinical psychology, so he can draw from years of research to give useful advice about conflict resolution, healthy communication, and other strong relationship-building practices.

Over the past few years, Christian Crush has hosted several successful marriage retreats in Colorado, and Wyatt said he plans to expand the program beyond his hometown in the coming months.

“My goal was to create a Christian-owned website and put in resources to help couples with their relationships,” he said. “I’m the main face of Christian Crush, and I care about doing it right.”

A Personality Assessment & Vetting Process to Keep Spammers Out

What sets Christian Crush apart from other dating sites is its values-driven approach to the online dating space. This isn’t a cookie-cutter dating platform. Wyatt spends a substantial amount of time ensuring that Christian Crush provides a safe and secure dating environment for Christians everywhere.

The dating site’s first line of defense against spammers and scammers is a lengthy personality assessment. The questionnaire is based on psychology profiling methods, and the site’s algorithm can spot when the respondent has filled in answers at random.

Then Wyatt personally checks each new profile before it becomes visible on the site. He said he has 12 main points he looks for to identify fake profiles, but if he’s ever unsure, he’ll send a follow-up message asking for proof of identification, usually in the form of a driver’s license.

“Doing that has helped tremendously in keeping the quality of my membership high,” he said. “I work hard to make sure that people on my site are real people and not spammers.”

Once you’re a verified member of Christian Crush, you can add a photo or video to your profile to show off your personality and attract someone’s interest. The dating profiles on this site are information-rich, thanks to that initial questionnaire, so it’s easy to spot compatibility and build connections with genuine people who share your interests, values, and lifestyle.

“A majority of people on my site are middle-aged,” Wyatt told us. “They’re working adults who are tired of the bar scene and want to find someone who has the same values system.”

Finally, the third prong of Christian Crush is Wyatt’s marriage counseling programs. He holds regular therapy sessions for clients, and he organizes marriage retreats about four times a year. He said it’s incredibly satisfying for him to bring couples together and watch them reaffirm their love for one another. His background as a clinical psychologist helps him educate and inspire Christian couples of all ages.

Engaged couples and older married couples have benefited from Wyatt’s couples counseling practice in Boulder, Colorado, and his marriage retreats have grown so popular that Wyatt’s looking to expand into surrounding areas, including Texas.

Whether you need assistance searching for a romantic partner or making your relationship last, Christian Crush empowers people to keep the faith and find happiness.

Giving Back: Christian Crush Donates 10% of Proceeds to Ministries

Wyatt’s parents got divorced when he was young, so he knows how important a stable relationship is to the health and happiness of a family.

“I was raised in a broken home,” he said, “and that experience cultivated in my heart a desire to help people avoid going through that.”

He created a dating site and relationship counseling resources to support singles and couples in finding a functional and long-lasting love. Christian Crush is on an altruistic mission to reduce the divorce rate and strengthen faith-based relationships.

“This seminar offers incredible help for men and couples. It draws people out of isolation.” — Lisa Brandenburg, the Care Pastor at Flatirons Church

Wyatt feels passionately about underscoring the sanctity of marriage and being a force for good in the world — and he puts his values into action in as many ways as he can. For instance, Christian Crush donates 10% of all profits to local ministries and other charitable organizations. Wyatt said this benevolence is simply an inherent part of his worldview and his purpose in life.

“We’re blessed to be a blessing,” he said. “It’s super rewarding to feel like I can play a small part in people’s relationships and happiness.”

On a Mission to Unite Christians & Reduce the Divorce Rate

Over the years, Wyatt has used his psychological knowledge, business acumen, and values-driven perspective to improve the quality of the Christian dating scene. He has connected countless couples, including his friends who got married, by offering online resources that support long-term connections based on shared faith.

Wyatt is a steadfast believer in the power of relationships, and his work in the dating industry has undeniably made it a friendlier place to be. “I’m working every day to improve my ranking and draw people to my site,” he said, “so that more and more people can find the help they need.”