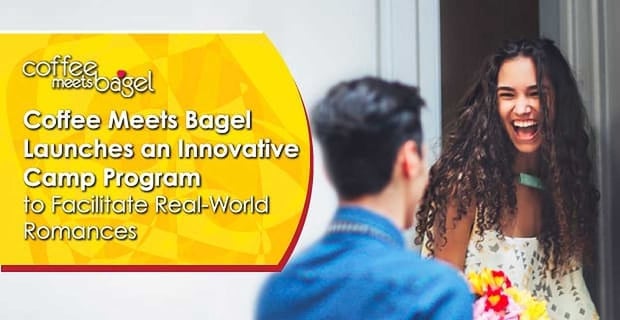 The Short Version: In the last few years, online dating has become one of the most popular ways to meet new people and find potential love interests, but all that swiping can wear on singles. Many online daters feel anxious to go beyond messaging and make real-world connections — they just lack the opportunities to do so. Thankfully, Coffee Meets Bagel, a female-driven dating app, is intent on changing that. This dating app has upgraded itself to offer more than messaging and matching features — it offers real-world connections through Coffee Meets Bagel Experiences. In May 2018, Coffee Meets Bagel ran an all-inclusive adult summer camp where New York singles could mingle in a spirited and engaging environment. By taking advantage of its unique calendar of events, Coffee Meets Bagel’s global community can start liking people the old-fashioned way and build authentic relationships with fun-loving singles.

Millennials have become an influential force directing the sales tactics and marketing strategies of major companies, most notably the dating industry. Born between 1980 and 1996, this generation of Americans represents a sizable chunk of today’s dating population, so meeting their needs is a high priority for many general dating sites and apps.

Throughout the years, companies have studied what milliennials want, and many of these investigations have determined that the average millennial is less motivated by collecting stuff and more interested in collecting experiences. An Eventbrite study revealed that 78% of millennials would rather spend money on a desirable experience than on a desirable product or service.

“For this group, happiness isn’t as focused on possessions or career status,” the study concluded. “Living a meaningful, happy life is about creating, sharing, and capturing memories earned through experiences.”

In 2018, Coffee Meets Bagel’s team decided to expand beyond its online dating tools and launch a program designed to give members a valuable real-world experience. Coffee Meets Bagel Experiences explore many innovative ways to connect singles and foster romantic connections in a dynamic offline environment. The company has hosted a 5k marathon and an adult summer camp in an effort to bring online daters together. The success of these initial events has encouraged the team to organize more engaging experiences for its loyal members.

Sharing such unique and fun experiences can help people build strong interpersonal bonds in a natural way, so Coffee Meets Bagel expects its events will inspire many friendships and relationships for years to come.

“Coffee Meets Bagel’s mission is to enable authentic connections for this generation,” said CMB Co-Founder and COO Dawoon King. “We want to create real-life opportunities for people to meet and share a common experience together, which often serves as a doorway to a lasting relationship.”

Coffee Meets Bagel launched in 2012 with a promise to put the needs of its users (particularly women) first. The dating app’s founders had the crazy idea to make dating fun again, and that has been central to everything they’ve done since. Over the years, the dating app has built a vast network of singles intrigued by its intuitive design and distinctive matching features which prioritize #LadiesChoice.

Then, in 2018, the paradigm-shifting dating app took strides to take online dating offline by organizing real-world events where singles could put their smartphones down and meet one another in person. The first official CMB Experiences event was a 5k marathon at Hong Kong Science Park just before Valentine’s Day. The event drew over 1,500 participants and was a great success.

A few months later, Coffee Meets Bagel partnered with Camp No Counselors, the world’s largest summer camp for grown-ups, to host a singles-friendly summer camp in New York. Tickets cost $695 per person and included lodging, meals, and on-site activities. During a weekend in mid-May, about 150 attendees came together to leave their stress behind and make friends in a natural environment. They participated in land activities, including archery, high ropes, dodgeball, kickball, and color wars, as well as water sports, including kayaking, paddleboarding, tubing, and waterskiing. At night, they told campfire stories while roasting marshmallows and bagels on the fire.

The Camp Meets Bagel event also hosted a legendary dance party led by DJ Mac Joseph. People danced the night away and got to know one another in a silly, adventurous, and carefree atmosphere.

“I’m very happy I came,” said Matt, a 27-year-old attendee. “I feel like I have made legitimate connections.”

Every week, Coffee Meets Bagel fosters thousands of new connections online. The female-friendly swiping features have been an undeniable success, inspiring many long-term relationships and marriages over the years.

Camp Meets Bagel’s outdoor activities encouraged singles to laugh and have fun together.

Coffee Meets Bagel often gets good reviews for its dating app, but now it’s receive high praise for its events as well. Criselle, a 32-year-old single who attended Coffee Meets Bagel’s summer camp, said she made at least three new friends during the weekend. “I’m having a great time,” she said in a testimonial. “I would definitely come to another Camp Meets Bagel event!”

With the motto “Stop swiping your life away,” Coffee Meets Bagel has spent the last few years encouraging singles to establish meaningful connections based on real-life compatibility. Its quality-first approach to online dating has been a game changer in the lives of many singles feeling burnt out on other dating methods.

Today, the dating app’s team is taking its services a step further by creating real-life opportunities for its members to meet one another and find romance. Currently in the works is a monthly date-night series in New York City with guaranteed entry for all Coffee Meets Bagel members. If you live in the city and are tired of looking for a match online, you can shake up your date routine by going to one of these events and looking for your match in person.

“Just be patient,” advised Nate and Kristin, a married couple who met on the dating app. “It’s honestly all about the right timing.”

Coffee Meets Bagel’s camp was just the beginning. The dating app’s team plans to offers singles many other engaging, romantic, and zany experiences in the coming years. CMB Experiences has aimed to foster the real-world experiences that singles, particularly millennials, crave.

By hosting events geared toward no-holds-barred fun, Coffee Meets Bagel has given singles a real-world alternative to online dating — and the best part is, it doesn’t involve hanging out at a bar. Thanks to Coffee Meets Bagel’s efforts, foresight, and imagination, today’s singles can enjoy many unique opportunities to meet relationship-minded people.

“We hope that through these shared experiences, we can create a sense of relatedness, camaraderie, and belonging for everyone,” Coffee Meets Bagel said. “We are excited to organize a series of CMB Experiences that will make great memories for you and your friends, foster great new friendships, and maybe spark some romance as well.”