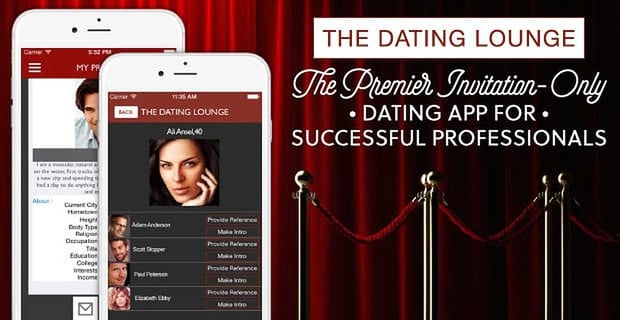 The Short Version: Where “the red velvet rope is always up,” The Dating Lounge is the first invitation-only dating app to be created by a professional matchmaker specifically for successful and sophisticated singles. With almost two decades of experience in the dating industry, Samantha Daniels founded The Dating Lounge based on her “secret sauce” for matchmaking — building an accurate algorithm that matches members with friends of friends and offering advanced features that allow them to zero in on their ideal partner.

And while online dating can be great for connecting these singles with millions of people, sometimes it can be hard for them to narrow down the field as much as they want to.

The Dating Lounge is the leading invitation-only dating app for high-profile singles.

Let The Dating Lounge do the narrowing for you with its exclusive community, where you’re matched with people within comparable social circles and friends of friends. Not only can you hone in on who you want to date, but you can also feel comfortable expressing your specific wants and needs.

We had the privilege of speaking with Samantha recently to learn more about The Dating Lounge, which is still in the Beta stage, its unique matching algorithm and features, who gets past the velvet ropes, and the inspirational story behind it all.

Probably the most important — and most impressive — component of The Dating Lounge is its matching algorithm. As a successful matchmaker for 16+ years, Samantha took what was working in her business in real life and mimicked that when creating the app.

Not only did she collaborate with experienced web developers on every aspect — from the concept to the functionality to the look — but she also asked successful people what they want in a dating app and what their likes and dislikes are in a partner.

This way, she could match them with people who exactly what they’re looking for.

“I wanted to create a circumstance where singles would have access to my secret sauce. I wouldn’t be doing it for them exactly, but it would feel like I was doing it,” she said.

Besides the algorithm, Samantha took just as much time building out every other unique feature of The Dating Lounge, including:

Samantha also created fun pop-ups that help you throughout the entire process and show off her professional yet relatable personality.

“Little messages come up from me all over the app to remind people that there’s a real person behind it,” she said.

Similar to an exclusive party, The Dating Lounge is selective about who gets in — and that’s exactly how members want it. In order to join, you have to either be invited by an existing member or fill out a registration form to be approved by Samantha and her team.

“Our logo is a red velvet rope to give you the image of getting into an exclusive place. Just like an exclusive place or an exclusive party, people get in for all different reasons — whether it’s being connected to people who are already there, where they travel, their philanthropy, their education, their success, where they work, or their looks,” she said.

Members of The Dating Lounge are all educated, attractive, charitable, and influencers in their careers.

Not only did Samantha build The Dating Lounge around what high-profile singles want in a dating app, but she also built it around what they want in a long-term partner — and the #1 request is someone like them.

Samantha describes her members as educated, successful, attractive, and charitable. They enjoy the finer things in life (like travel and fine dining) and have a “work hard, play hard” mentality.

Members are influencers in their respective careers, which can vary from hedge fund partners, entrepreneurs, and CEOs to professional musicians, athletes, and actors. 98% of them went to college (with over 70% attending grad school), and their incomes start at $100,000 and go up to $10 million. Whereas, on other online dating sites and apps, careers can vary greatly and incomes typically start at $25,000 and top out at $100,000.

But, most importantly, members all have a connection in some way because of their similar lifestyles and work and social circles — so the know their needs are being met.

The Inspiration Behind The Dating Lounge: A Unique Idea Backed by Decades of Experience

From its spot-on algorithm to its helpful tools to its exclusive atmosphere, The Dating Lounge couldn’t exist without Samantha Daniels and her hardworking, creative, and caring nature — something she’s had since the beginning of her matchmaking career.

Taking Dating Apps to the Next Level & Helping More Singles

As a matchmaker for almost two decades, Samantha has heard some common complaints about online dating from high-profile singles — whether it’s the lack of available matches, lack of things in common, or lack of honesty.

She had helped thousands of people overcome those issues and find dating success in person, so she knew she could create an extension of her business where more people could access her expertise. A dating app was the solution, and so The Dating Lounge was born.

Samantha created The Dating Lounge to fill a hole that was missing in the dating app space.

“From all of my experience with high-end people over the past 16 years, I was able to figure out exactly what they wanted and what they didn’t want in an app and create features that spoke to that,” Samantha said.

Besides giving successful singles their own online dating community for finding their perfect match, The Dating Lounge is filling a hole that was missing in the dating app space.

Matchmaking + Entrepreneurship = Over 16 Years of Success

The idea to become a full-time matchmaker came to Samantha while she was a practicing divorce attorney in New York City. She always had an interest in matchmaking and was really good at setting up friends and acquaintances on dates that would often turn into relationships and marriages.

Samantha also had a killer entrepreneurial spirit, so she decided to combine the two and start her own matchmaking business in 2000 — a time when matchmaking and online dating in general were new kids on the block.

“I was always fascinated with human interaction and with the way people met and how they fell in love. And this was a time when I could pave the way for a different kind of matchmaking that didn’t really exist at that point, which was working with high-profile, successful, busy people who had no trouble finding their own dates but who just hadn’t found the right person,” she said.

Ten years later, Samantha was doing so well that she was approached by “Sex and the City” creator Darren Star, who wanted to make a show based on her incredible story. They sold the rights to NBC and “Miss Match,” starring Alicia Silverstone as Samantha, became a fan favorite.

Now Samantha is one of the most well-known and well-respected matchmakers in the dating industry. Not to mention she’s also the author of the popular book “Matchbook: The Diary of a Modern-Day Matchmaker” and a regular contributor for news outlets like The Huffington Post and and Thought Catalog — bringing her expert romance, dating, and relationship advice to millions.

The Dating Lounge is a breath of fresh air in the jam-packed dating app industry. And while originality is something Samantha always strives for, she said the most important goal is to continue developing and maintaining personal relationships with her members. Keeping her finger on the pulse of what’s important to them is what will ensure The Dating Lounge is around in the long run.

“There are a lot of dating apps on the market, but only a few will survive. And the ones that will survive, and I believe The Dating Lounge will be one of them, are apps that have solid foundations and give the members what they want,” she said.