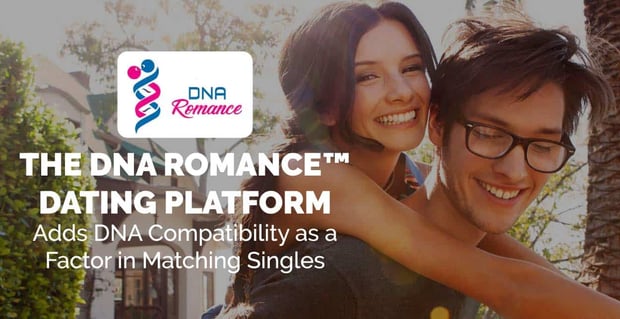 The Short Version: Biological science suggests that chemistry is one of the most significant factors in compatibility, complementing good looks and shared interests. That’s the premise behind DNA Romance, a research-focused dating site that forecasts how much “chemistry” is shared between matches using information hidden in their DNA. Dr. Timothy Sexton, who holds a Ph.D. in molecular genetics, identified more than 100 DNA markers that could be used to predict whether a couple will have chemistry. He and his co-founders created DNA Romance to translate DNA information and focus on those compatibility factors they felt were lacking on other dating platforms.

In the mid-1990s, Swiss zoologist and biological researcher Prof. Claus Wedekind conducted the so-called “sweaty T-shirt experiment” proving a definitive link between DNA and romantic attraction. In the first experiment, 49 female students and 44 male students with an average age of 25 were recruited.

The men were asked to wear the same clean T-shirt for two nights and then return it to the research team. Later, the women were asked to smell each shirt and describe how pleasant they smelled on a scale of 1 to 10. The results showed that women found male body odor to be pleasant when the male participants were far more genetically different in a specific set of genes called the Major Histocompatibility Complex (MHC) genes.

In contrast, the women found male body odor to be unpleasant when the male participants were genetically similar in the MHC genes. Independent research has continued to validate these findings.

While pursuing his Ph.D. in molecular genetics, Dr. Timothy Sexton noted that many species, including primates, fish, and birds, paired up based on having different DNA bases in their MHC genes. Two years later while working as a Postdoctoral Research fellow, Dr. Sexton connected the importance of the information being described in the “sweaty T-shirt experiment” described in human and animal research. At that point, the penny really dropped.

“Birds were pairing up for life based on the same set of genes,” he told us. “And birds that mated for life would have different DNA alleles in these genes. At the genetic level, a biological phenomenon known as balancing selection was operating to preserve diversity in a specific set of genes, influencing our decisions for mate choice and this truly fascinated me.”

DNA Romance shows users a compatibility score based on their genetic makeup, not interests or looks.

As individuals, we each have a sense of smell that can help guide us to find a life partner with highly compatible DNA. But as technology and online dating have changed the way we meet, people have become less in tune with their senses and natural abilities to evaluate if they have real romantic/sexual chemistry with another person — beyond good looks or similar interests.

Dr. Sexton said he suspected that matching based on this inherent DNA attraction was the missing ingredient in current dating platforms. After years of research and development, he and his team have built DNA Romance, which generates matches based on more than 100 compatible DNA markers.

The web app is accessible on any device with a screen, with separate views for desktops and mobile phones.

Before developing his platform, Dr. Sexton had been dating online for several years, trying to find his perfect match. While he’d clicked with several women after chatting with them, he often discovered there was simply “no chemistry” when they met for an in-person date.

“You connect with people online, and then you go to meet them in person and don’t have a connection. You think, ‘I like their appearance, and we get along in chat,’ but then you realize, ‘Oh, there’s simply no chemistry.’ It was a painful experience that went on for about five years of my young life,” Dr. Sexton said.

Though Dr. Sexton already knew which genes played an important role in attraction, he also saw firsthand that dating platforms weren’t paying attention to that information. He felt the sites could be improved if they let people know whether they had a spark before they met.

Dr. Timothy Sexton said he believes that DNA markers are an accurate predictor of chemistry.

“I wondered why this information hadn’t been used in online dating to create more effective matches,” he said.

In creating DNA Romance, Dr. Sexton knew he needed to build a platform that could process DNA data, analyze that DNA data, and describe the results in an informative and meaningful way.

The company’s DNA matching algorithm works by first considering more than 100 DNA markers from genetic tests completed by users. Each user can see a forecast of expected “romantic/sexual chemistry” with their matches. Users can find matches minutes after DNA Romance analyzes their genetic profile.

“For people who’ve taken an at-home DNA test, usually for ancestry, they can re-use their raw DNA analysis data for DNA Romance’s matchmaking. Or if you haven’t taken a DNA test before, then you can purchase a DNA test from us” Dr. Sexton said.

DNA Romance also considers other factors known to contribute to romantic compatibility including personality, which is evaluated between matches, where each user has the option to enter their Myers-Briggs personality type. Psychological research suggests that some of these 16 unique personality types relate better with others.

DNA Romance matches singles based on biological markers that are proven to predict compatibility.

The platform can more accurately predict the success of a match by combining both the genetic testing and personality assessment.

Matches aren’t paired just based on scientific evidence. Profiles also include photos and other personal information so users can make more informed decisions about who they want to pursue.

“Our platform is a simple interface that shows people all three major forms of human attraction in one glimpse,” Dr. Sexton said. “They can evaluate the photo, see the forecast of chemistry based on DNA, and see a forecast of expected personality compatibility.”

Once users find a match, they have several options to start interacting with potential dates. They can send them a heart to let them know they’re interested, send them a message, or add them to a “maybe” list to save their profiles to review another day. Or, if they’re not interested in a match, they can delete that individual from their list.

DNA Romance has developed more reliable genetic testing methods over time. In addition to those methods, the platform has performed DNA testing on successful long-term couples.

“The couples who try DNA testing with us have shown some of the highest compatibilities. One couple had a 98% compatibility rating,” Dr. Sexton said. “On the flip side, we’ve also tested people that we shouldn’t be compatible with, like family, and they don’t show up on the test at all.”

This kind of precision matchmaking using DNA should allow singles to make more informed decisions saving them from dating fatigue. When Dr. Sexton first thought of a DNA based dating platform, he said he worried there wouldn’t be a market for such services. However, he soon realized how popular the idea was, and now DNA Romance has attracted users from 94 countries and counting.

“Each of us have an advanced sense of smell capable of identifying compatible partners in-person, but we can’t use our sense of smell to evaluate chemistry online. So we developed DNA  Romance to bring a forecast of sexual chemistry to online dating.” — Dr. Timothy Sexton, Founder of DNA Romance

Dr. Sexton and his team want to encourage more singles to sign up for the site. Today, most users are from North America, and many of them live in larger cities, but the platform is expanding to more regions so that matched users can more easily meet up in person.

Dr. Sexton said he believes that his company is performing an important service — especially as singles rely on virtual platforms more and more.

“Each of us has an advanced sense of smell capable of identifying compatible partners in-person, but we can’t use our sense of smell to evaluate chemistry online. So we developed DNA Romance to bring a forecast of sexual chemistry to online dating,” said Dr. Sexton.