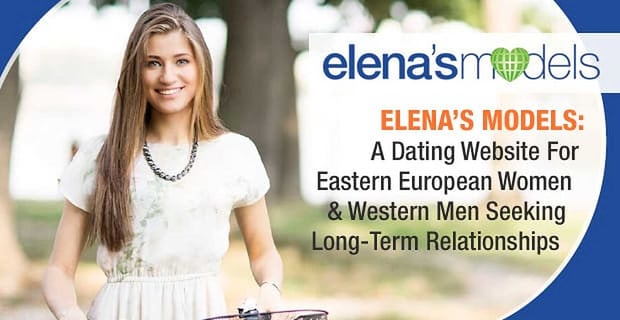 The Short Version: Finding love abroad is no easy task, especially for daters in Eastern Europe. Many untrustworthy dating networks promote false profiles or charge singles for each message sent. That’s no way to connect with someone! If you’re looking for an international dating site that’s the real deal, Elena Petrova, a Russian blogger and certified life coach, has the answer. Elena’s Models caters to singles who are looking for something serious and are willing to cross borders for love. Primarily, the dating platform encourages Eastern European women to mingle with Western men, but any commitment-oriented dater is welcome to join and communicate for free. Since 1999, Elena’s Models has seen over 2 million dating profiles created and currently maintains a network of 140,000 active users from 200+ countries. Elena’s Models offers all members a straightforward path to romance online with simple features and helpful customer service for men and women around the world.

At age 29, Elena Petrova was a typical Russian woman who dreamt of marriage abroad. She had a university degree and a steady job working as a regional manager for a marketing company. She was unmarried and desperately wanted a family — and she was willing to move across oceans to have it.

Elena Petrova, Founder of Elena’s Models, helps create matches and offers detailed dating advice on her blog, written in both English and Russian.

In 1997, she found a husband in the South Africa where she relocated, got married, and had two children. In 2003, she moved to Australia with her family and completed courses to become an NLP Practitioner and Master of NLP. By 2007, she was a certified life coach writing advice online.

She launched her first website in 1999 and wrote dating advice in English. Elena was a blogger before the word “blogger” was even coined. She loved writing honestly about dating and relationships for a cross-cultural audience and sought to make a difference in the lives of singles around the world.

She soon turned her attention to helping her female friends back home make matches of their own. Elena began posting pictures of her friends on her blog, which generated enormous interest among American men.

“It was quite funny, actually,” she recalled. “All the men were asking if the girls were real or models.” Inspired by such positive feedback, Elena decided to create ElenasModels.com, a dating site geared toward Eastern European women seeking marriage abroad. Today she runs the site alongside a passionate team of 15 dating experts with decades of experience working with singles.

Elena’s Models is one of the few female-owned-and-operated Russian dating websites, and Elena prioritizes results over profits. Her dating site is membership based, not pay-per-letter, meaning you only pay a one-time fee to receive unlimited communications and premium features.

Elena facilitates meeting dating prospects without borders. She wants her site to be effective and easy to use. She doesn’t charge per chat, she doesn’t restrict the exchange of contact information, and she doesn’t pad her membership with fake profiles. As a result, ElenasModels.com boasts more than 140,000 genuine and active members hailing from the US, Canada, Australia, Russia, Ukraine, and hundreds of other countries.

“We allow members to move immediately from our website to connect directly in any way they prefer: phone, email, Skype,” Elena noted. “We do not pay money to agents to register women on our site or commissions for correspondence. This makes us stand out from 95% of all Eastern European dating websites.”

The features of Elena’s Models are simple and effective, helping singles communicate without unnecessary complications. Free members can sign up, upload a profile, add pictures, and contact people using an Expression of Interest (EOI). The person receiving the EOI can answer back with “Yes” or “No.”

Another special feature is the personal blog, which appears as a newsfeed helping members keep track of new photos and status updates among their contacts. Instead of keeping your dating profile static, you can show yourself off and catch someone’s eye by adding to your blog. “Only users you communicate with can see the updates,” Elena told us. “The personal blog allows each member to show how real, exciting, and interesting they are as person.”

Since 1999, Elena’s Models has registered more than 2 million dating profiles.

On Elena’s Models, you can sign up free and connect with other members through email, phone, or social media. The dating app ensures you can keep in touch via text or video chat wherever you go. “Since all our women have mobiles, it’s very easy to keep in touch all hours of the day when you are dating.”

Team members personally vet all members with a world-leading profile verification service. Female members are interviewed by phone or Skype to ensure they are authentic singles looking for something serious. Member activity and behavior are closely monitored to maintain a safe and friendly space to meet people online.

“All in all, I guess, our best feature is that we have lots of people who want a relationship,” Elena said, “and we have lots of women as compared to other dating websites.”

User Demographics: Over 50% of Members are Females Ages 25-34

Since 1999, the dating site has seen a total of 2 million dating profiles and currently boasts a membership of 504,000 singles — 140,000 of whom have been active on the site within the past 90 days. Elena values how many genuine daters have come to her site and remain active.

“We don’t create hype about the number of total membership but look at real profiles and those that are active on the site,” Elena said. “The number of our genuine current active members during the last 90 days stands at 140,000.”

Max lived in Mexico, and Anastasia lived in Russia, when they met on Elena’s Models and fell in love.

“We really would love to have more men 30 to 45,” Elena told us. “This is the most in-demand age among our female clients. When men of this age register, they always get a lot of interest from women.”

Members come to Elena’s Models from all over the world — including Australia, Belarus, and the UK — but a significant segment reflects the founding goals of the website to match Russian women with American men. About 33% of male members come from the US, and 46% of female members come from Russia. Of course, not everyone falls into this category. Elena told us the site’s membership even includes some Russian men living abroad and hoping to meet a woman who shares their values and doesn’t mind moving for a relationship.

Language barriers are not a problem on this site because all women from the former USSR study the English language in school for at least six years. The language is compulsory throughout school, and college graduates likely have a minimum of nine years of English courses in their background.

“We have, on Elena’s Models, women who live in the USA, European Union, Australia, so you can even meet someone who already lives in your country,” said Elena. “We are basically a website for anyone seeking something serious — hopefully, to stay together for life, get married, and have a family.”

Dozens of couples contact the Elena’s Models team each year to show them wedding photos or family portraits and thank them for bringing them together. On the site, you can read through hundreds of touching success stories from people around the world.

Many of these testimonials describe whirlwind international romances across continents. “Most people say they talked a lot on Skype, and many say they knew straight away this was the right person for them when they met the future wife or husband,” Elena said. “Love works in mysterious ways. It’s just easy with the right person.”

Michael, an Austrian single, felt frustrated after dating for five years on and off, but once he met a woman from the Ukraine on Elena’s Models, everything clicked. They were married two months later. “We found the best friend, the partner, and second half… what we’d been dreaming about for such a long time,” he said in a testimonial. “With the help of Elena’s Models, you have a very high chance of making your dreams come true.”

“Elena, your site is an opportunity to enrich one’s understanding of the world, meet interesting people, and find love, and we both want to thank you for that.” — Anna and Ioan, a married couple who met on Elena’s Models

The singles on this dating site don’t let distance or age stand between them and the love of their lives. According to the dating site’s internal statistics, 34% of married couples who met on the site between 2014 and 2016 have an age difference of 10 years or more. The average age gap was eight years, and the largest age gap was 17 years between a 25-year-old Russian woman and a 42-year-old American man.

Singles as young as 18 and as old as 67 come to Elena’s Models for a solution to their love frustrations and find a world of possibilities within this reliable network.

Elena described her cross-continental dating site as a natural extension of her blog. “I had guys reading English articles and girls reading Russian articles,” she recalled. “I simply got programmers to write a program and put it all together, and it worked.”

“We have all the tools for people to swiftly move to the offline stage of dating and develop a close personal relationship in the real world.” — Elena Petrova, Certified Life Coach and Founder of Elena’s Models

To help match singles even more quickly, Elena’s team is working on launching an exclusive matchmaking program for individuals who’d like a little help in the dating department.

Elena feels motivated to create real-life matches between singles dreaming of marriage abroad. She remembers what it was like to yearn for a family, so she does all she can to support relationship-oriented daters in a worldwide dating network. “I really understand our female clients, what their dreams and aspirations are, as well as fears and apprehensions,” she told us. “I went through this myself.”