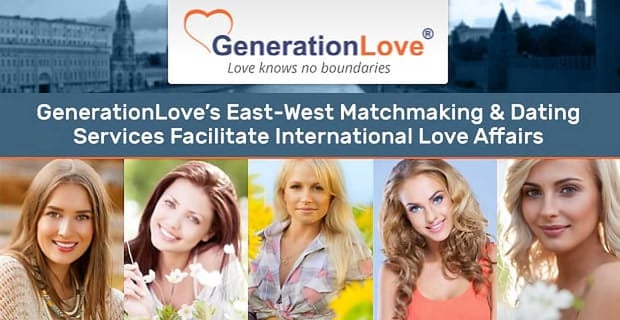 The Short Version: Love knows no borders, and today’s technology makes it easier than ever to connect with anyone, anywhere. GenerationLove bridges the distance between Western men and Eastern European women with hands-on customer service and online connective tools. This family-oriented dating platform partners with local marriage agencies in former Soviet states to provide a wholesome and marriage-oriented dating environment for worldly singles. GenerationLove’s knowledgeable team and partners can book your travel, assist with visa applications, give personal counseling, and offer a safe framework to meet someone new abroad and build a lasting bond.

In 2013, a German single named Jens fell for a Ukrainian woman he met online on GenerationLove, an international dating service. The attraction was instantaneous, and their emotional connection only grew stronger with time. “When I first saw Irina’s photos on GenerationLove, it was as if lightning struck me,” Jens recalled in his testimonial. “I was very impressed by her beauty.”

He was nervous about contacting such a stunning woman, but, once he showed interest, he found her down-to-earth and affectionate in her replies. “The way she expressed her emotions gave me the assurance that I would not be disappointed,” Jens said. “She was exactly the kind of woman I had always wanted.”

“I had found my happiness even though it was nearly 2,500 kilometers away from me. But that did not matter for me. I wanted to hold onto this happiness.” — Jens, a GenerationLove user from Germany

After months of flirting online, Jens traveled to meet his love interest in the Ukraine. He gave Irina roses and chocolates, and she gave him a coffee cup decorated with heart-shaped pictures of the two of them. Then he met her two daughters, and they all went bowling together. That trip confirmed Jens’ feelings for Irina, and, even as the German single departed, he knew he would be seeing her again.

Thanks to GenerationLove, Jens and Irina found a love connection across international borders. Over the years, this trusted dating service has operated with high integrity and yielded many other successful matches between Eastern European women and Western men. The team personally verifies every profile and photo, fostering a safe and appropriate space to mingle with commitment-oriented singles around the world.

A complex and challenging dating environment created the need for international introduction services like GenerationLove. According to the Pew Research Center, former Soviet nations have predominantly female populations due to an unusually high mortality rate for young men in the region. The 2015 study reported that there are 86.8 men per 100 women living in Russia — while the world ratio is 101.8 men per 100 women. This stark gender imbalance in Eastern Europe makes dating difficult for young women who are family-oriented and having trouble finding a partner near them.

Fortunately, GenerationLove uses the power of the internet to solve this issue by connecting women in post-Soviet states with men in prosperous Western countries, like Germany, the UK, and the US. It’s free to join and browse through thousands of profiles for a potential partner.

“GenerationLove offers a transparent and honest dating service aimed at singles who want a lifelong partnership and a family,”said Walter Halbrock, Director of International Affairs for the dating site. “Our team has made it our mission to provide our members with the best possible support in finding the right partner.”

Where Marriage-Minded Adults Can Mingle Across Borders

A majority of GenerationLove’s users are marriage-minded women living in the Ukraine, Russia, Belarus, and Armenia. Often frustrated by their local dating prospects, these singles go online in search of a sincere connection with single men abroad. Because the website operates out of Germany, many of the male users come from German-speaking countries, but there are also a fair number from English-speaking countries, including the US, Canada, Australia, and New Zealand.

Men can register on the site for free, but they must pay to read or send a message to or from a woman. Video conferences are also available for paid members. Once a connection has been established, the GenerationLove support team and local marriage agencies can arrange the details of a first meeting and give experienced counseling to the couple, if desired.

GenerationLove is a serious platform for adults serious about settling down. The average age of people in the membership base is 35 years old. Every woman on the site is registered and supported by a local marriage agency, meaning she has proven her identity with documentation and is a real person seeking the real deal.

The GenerationLove team manually checks every profile and photo on the site to protect users online.

To ensure a level of trust and safety for singles on GenerationLove, all first meetings arranged by the matchmaking service will be in the hometown of the single woman. A local partner will accompany the woman to the initial meeting and make sure the date goes smoothly. The team assists with everything from making travel arrangements to setting up a backup date if your original match falls through.

GenerationLove works closely with local dating agencies in the Ukraine, Russia, Belarus, and Armenia to ensure their customers have a support system in place throughout the matching process. Each local dating agency is thoroughly vetted and approved to ensure a high standard of quality and reputability.

“An important element of our work is connecting online services with personal advice and introduction services,” Walter commented. “We are in permanent personal contact with our local partners and visit our local representatives regularly.”

The people who work at GenerationLove come from a variety of backgrounds, including IT, business, social services, and psychology. Their combined skill sets now aid users actively pursuing a long-term partner on the site. The team capably handles meeting arrangements for online pen pals and provides helpful guidance every step of the way, from flirtation to final vows.

Registering for GenerationLove is free and only takes a few seconds.

“We consider good support, such as relationship and marriage counsel, to be the core of our service,” Walter said. “Our services also include help for men’s travel preparations.”

Whether you need the assistance of a translator or a tour guide, GenerationLove has got it covered. You can rely on the team to take care of car rentals, hotel reservations, and other travel arrangements, so meeting an attractive date abroad is simple and hassle-free. Through the support of local partners, GenerationLove also offers a gift and flower delivery service so members can send a crush a token of their affection during the courtship period.

Testimonials From Happy Spouses Who Met on GenerationLove

On GenerationLove, finding a partner is as easy as a simple search. Sometimes single men and women hit it off on their first match and come away with lifelong partnership. Boris was so taken with Natalia on his first visit to meet her in the Ukraine that he proposed at the end of his trip. “We looked at each other, and I immediately knew I had finally found the person I had been seeking for so long,” he said in his testimonial.

Many other testimonials speak to how good the GenerationLove team is at inspiring deep connections online and helping them blossom in person. “After meeting my dear Mike, the world changed for me,” wrote Tehmine, who met her husband on the site. “Now we are very happy. We wish everyone would [be] as happy as we are.”

According to Walter, “GenerationLove is valued as a serious single platform and matchmaking service. Members often recommend it to other singles, and we often hear that the bride and groom give a testimonial on their wedding day.”

“I am very happy with Ronald. With him, I feel like a queen with her beloved king living in a fairy tale.” — Yana, a Ukrainian woman in a testimonial on GenerationLove

Walter told us the testimonials on the site are just a fraction of the notes, photos, and videos sent to the GenerationLove team by happy couples who met via the matchmaking service. Though many people wish to keep their love stories private, some couples choose to share their happiness and good wishes with others along the same journey.

“We want to wish good luck to everyone who is looking for his or her soulmate,” wrote Yana and Ronald, who met on GenerationLove and now live together in Austria. “We hope everyone on this site will be able to find a soulmate and feel as happy as we do.”

A Direct Introduction Service For Singles Looking for a Partner

Online dating services can help singles transcend physical distance and make a date with someone special, even if they’re currently in different countries. All it takes is the right tools to get you started. Jens felt skeptical about online dating, but he gave GenerationLove a try and found the love of his life.

The GenerationLove team maintains an East-West matchmaking service to support men and women embarking on an international love affair. It just takes a few messages to start building a relationship with a charming and attractive dater in another country. Your crush may live thousands of miles away from you, but the internet, and GenerationLove, can bring you closer together.

“We are always looking into new possibilities to introduce marriage-minded singles to each other,” Walter told us. “We are constantly improving our services — not only the online dating services we offer but also relationship and marriage advice and our direct introduction service.”