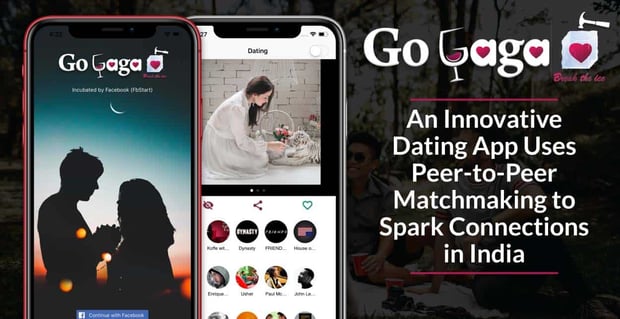 The Short Version: An up-and-coming dating app called GoGaga has opened the door to a new age of online dating in India by putting the needs of young singles first. Instead of reinforcing a swipe-happy dating scene, the app offers peer-to-peer matchmaking tools that build relationships based on trust and friendship. Members can take advantage of their social connections and receive date referrals from friends who vouch for that person’s authenticity. GoGaga has essentially eliminated fake profiles with this twist to online dating, and it has introduced over 10,000 singles throughout India. The GoGaga app is currently available on iTunes and Google Play.

The GoGaga dating app is the passion project of two siblings. Neha and Meet Kanodia are a dynamic brother-sister pair who understand the challenges faced by young Indian singles — because they’ve faced them, too.

In 2016, their parents tasked Neha with finding a wife for her brother. Neha and Meet took two different approaches to this problem. Neha suggested matches to Meet through traditional matrimonial networks, and Meet searched for partners on dating apps. They both came up short.

GoGaga is an Indian dating app that sparks serious relationships.

However, the experience showed them that the Indian dating scene was a tale of two extremes. On the one hand, you have time-tested marriage arrangements through family, and on the other you have fast-paced yet superficial dating apps. The couple felt the need to create a middle ground for singles searching for love online and wanting to include their loved ones in the process.

So, Neha and Meet created Go-Gaga-App.com to support a community of online matchmakers who can use swiping to pair off their friends and family members.

Meet himself was one of the earliest testers of the new dating app, and he eventually met his match through this network. A childhood friend introduced him to a doctor who lived 1,500 kilometers away, but that didn’t stop their affection and love from blossoming. Meet is now happily married, and he firmly believes in the power of peer-to-peer matching in the Indian dating scene.

GoGaga has given hope to countless young Indians who, like Meet and Neha, want to establish true relationships that go beyond algorithms or location-based matching. This unique app gives singles the chance to use their friends network and family connections to make something happen in a modern dating scene.

“Our mission is to make dating safe, trustworthy and relatable to millennials,” the GoGaga team told us. “We aim to become a one-stop-shop where we take a user from the point of introduction to dating advice to arranging dates for them.”

Modern singles have thousands of dating sites and apps at their fingertips, but not all these platforms are effective or even reliable. Some offer a lot of swiping action without presenting any real date options, and others require users to hand over their personal information in hopes that the algorithm can read the secrets of their hearts.

The very nature of Indian dating has begun to change as a generation of singles shift away from matrimonial matchmaking. Rather than leave love in the hands of their parents, today’s young people largely prefer to mix and match themselves on dating apps and sites. However, this brave new world has its drawbacks.

GoGaga is available for free with some premium features.

According to the GoGaga team, “Key troubles that exist on both matrimonial and dating channels are a prevalence of fake profiles, bots, married men, expectation mismatch, and deceptive profile information.”

The GoGaga app endeavors to solve these problems by creating matches powered by friends and family members. Its referral system is unique because it allows Indian singles to consult with matchmakers while still exercising their own judgment in the online dating scene.

GoGaga members can download the app for free and identify themselves as either Seekers or Matchmakers. Seekers are singles who are looking for dates for themselves, while Matchmakers are looking on behalf of someone they know on the platform.

Seekers will view the profiles of friends of their friends, and they can request an introduction by a Matchmaker once they see someone they like. Their mutual friend will then look over the match and either approve or reject it. Only approved matches can communicate on Go-Gaga-App.com, and that adds an important layer of trust to the typical swiping process.

GoGaga Matchmakers have the power to make referrals, approve matches, and see what happens. They do not have to date themselves on the platform and can choose to hide their profile from others.

Indian singles make up over 85% of GoGaga users.

GoGaga has attracted many millennials in India, and it is growing its reputation in the U.S. and the U.K. as well. Approximately 32% of new users join because of a word-of-mouth referral, and most of them are seriously looking for a long-term partner — either for themselves or for someone they care about.

“GoGaga is particularly popular among young professionals in their 20s,” the team said. “In the current day and age, young singles value the opinion and suggestions of their friends, and at GoGaga, friends play an important role in the matchmaking.”

Today, GoGaga is one of the biggest platforms offering peer-to-peer matchmaking. It welcomes people of all ages, orientations, and backgrounds, and it empowers them to seek trustworthy dates by asking their friends for a helping hand.

This innovative system ensures that singles won’t encounter fake profiles or bots in their inboxes, and that can offer great peace of mind to the serious daters of the world.

“With profiles being pulled from friends network, only real human beings are shown,” the team said. “A mutual friend vouches for the connection, so that means personal information (age, photos, marital status, and more) are validated automatically.”

Meet Kanodia graduated from IIT Delhi with a degree in electrical engineering, and he also studied business in Europe and Mexico. Armed with an MBA, he worked in London and Paris as an investment banker for six years.

As Meet became familiar with the gaming and dating industries, he decided to change careers and make a splash in the mobile space with the help of his sister, who happens to be a master coder.

GoGaga relies on the creativity and innovation of a nine-person team.

Neha has over 14 years of technical experience at major companies, including Goldman Sachs and Oracle. Neha coded the Android and iOS version of GoGaga by herself, and she remains the tech backbone of the app.

In 2016, Meet and Neha combined their talents to create a dating app that fundamentally changes the way Indians approach online dating.

As a mompreneur, Neha encourages the women on her team to excel in their work life and home life, and she has led by example in an industry still dominated by men. Neha is the community ambassador for Bangalore chapter for SheLeadsTech by Facebook and Yourstory.

Go-Gaga-App.com offers flexible working hours in support of mothers rejoining the workforce, and the team is better because of it.

“We keep the work culture very diverse,” the GoGaga team said. “Our team has a good mix of people in their 20s and 30s, and evenly split in terms of gender.”

GoGaga has gained momentum in the past few years and created over 10,000 matches worldwide. Its team has celebrated many victories and won recognition from leading tech companies, including Facebook and IIM Bangalore. Such awards offer a vote of confidence in the app, but the success stories and testimonials truly show what it can do for people.

Meet isn’t the only person who has found love and marriage through the GoGaga network. Many people have reached out to say the app made a difference in their dating lives.

GoGaga has pioneered a trustworthy match system in some of the world’s largest dating markets.

“I have used the GoGaga app, and I have been connected to some really interesting people,” Timothy V. said on Google Play. “I’m really happy with what the app has given me.”

“I tried some dating apps but there aren’t many users in my city,” said Abhishek, a self-described shy dater who turned to GoGaga for guidance. “I keep asking my friends working in Delhi to introduce me to their colleagues, now I can do that at GoGaga.”

Singles aren’t the only ones enjoying GoGaga. People in relationships like having the opportunity to match up their single friends and explore the online dating scene through a different lens.

“I have so many single girls around me — I wish I can set all of them up,” said Aayushi, a Matchmaker at GoGaga. “I have made many matches on GoGaga already, so excited — all my friends will be taken and then we can hang out on double dates.”

The GoGaga team is currently working on nurturing a more integrated dating community and building off the strength of its matchmaking algorithm. The technical experts plan to use machine learning and artificial intelligence to make this already proven system even more efficient and successful.

By the end of 2020, the GoGaga team intends to surpass 100,000 successful matches and continue to grow in India and Southeast Asia.

GoGaga Harnesses the Power of Referrals in Online Dating

Meet and Neha set out in 2016 to bring greater authenticity and trust to the online dating world, and now their ingenious matchmaking system is taking India and the U.S. by storm.

GoGaga gives singles the chance to date as part of a community and create matches that have been vouched for by their friends and family members. The app’s peer-to-peer matchmaking is intuitive and effective because it’s how singles have met their partners for generations — by asking a friend who they know that’s single.

“At GoGaga, we show users only friends of friends to establish trust,” the team explained. “Our matching is very similar to real-life and eliminates fake profiles and bots in the process.”