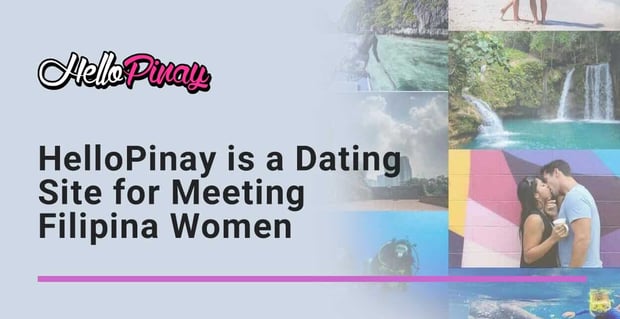 The Short Version: HelloPinay is an international dating platform that invites singles to explore romantic connections on foreign shores. The site provides scam-protection software and multimedia communication options to support single men in search of a Filipina date. Since 2017, HelloPinay has maintained a friendly and safe dating community that reflects the spirit of the Philippines and can inspire newcomers to cross new horizons for the sake of love.

The story of HelloPinay began with one Midwestern man on a whirlwind journey. Mark had visited and lived in several countries throughout his career, but it wasn’t until he quit his job as a developer and founded a small software company that he met a group of foreign people who made him feel at home.

In 2014, Mark was on vacation in Myrtle Beach, South Carolina, when he made friends with some Filipinos who were part of an international exchange program. Later that year, he flew to Cebu City and spent seven months in the Philippines.

During his stay, Mark used online dating sites as a way of meeting local women. “I did not have much prior experience, but I was having a lot of fun,” he said. “I think I knew right away that I wanted to build one — even though I knew it was going to be a mountain of work and be a big financial risk. I just believed that I could do it.”

Mark started building HelloPinay in 2016, and it was ready to launch by the summer of 2017. The international dating website didn’t need a lot of flashy features to attract a strong following. The promise to introduce foreigners to real women in the Philippines was enough.

The Philippines is home to many genuine, love-driven women, and it can offer a world of romantic opportunities for single men who are willing to cross borders for the right partner.

“It is a very hospitable and beautiful country,” Mark said. “If it is not on your list of places to go already, maybe take a little time and research it online. You will love it here. It is the longest amount of time I have ever stayed in a foreign country.”

HelloPinay was not an overnight success. Mark worked hard to expand the dating website and build its reputation in the international dating market. At one point, he even went so far as to hang large tarpaulin banners throughout Cebu City in hopes of getting people’s attention. Thanks to Mark’s passionate and diligent efforts, word spread slowly but surely about the new Filipina dating site.

Unfortunately, as registration numbers went up, the team encountered a new problem: fake profiles. A handful of scammers could threaten the safety and success of the entire community, so Mark took swift action to drive out the bad actors.

“It was a major undertaking that sidelined other development that we wanted to do, but it was essential for us,” Mark said. “The upside to having had to go through that is now we can say that we fully understand who our users are.”

HelloPinay has proclaimed itself scam-free and bot-free, and every dating profile left in the database has been confirmed as authentic.

Foreign men can use HelloPinay to meet Filipina women without having to worry about fake accounts, spam messages or romance scammers. The site promotes an international matchmaking system that is simple and secure. Members can be removed for violating the terms of service.

Mark compared his niche dating site to a classy singles bar because everyone is welcome to enter, but only those who conduct themselves with respect and kindness will be permitted to stay.

“We are quite strict when it comes to our users,” Mark said. “For us, it is not about the quantity of our users but the quality. We do not want to compromise on that.”

HelloPinay stands out from its competitors by dispensing with hasslesome registration steps. The dating site sticks to the basics when setting up a new dating profile. Facebook and Google logins are not part of the process. As Mark said, “Big tech knows enough about us already.”

The international dating site does not force users to complete every section of their dating profile to access the database. However, uploading a profile picture is required, and the picture must pass an AI face recognition test as well as a personal audit by a HelloPinay team member. Every dating profile is reviewed upon creation and periodically scanned by scam-protection software.

Members can add up to 30 photos and hundreds of interest-based tags to their dating profile.

Members can leave their impressions of profile pictures by reacting with a like, love, or smile, and they can also rate dating profiles on a scale of one to five to express interest. The dating site features a Favorites and Interests list where particularly attractive profiles can be easily accessed.

Many dating profiles feature tags of interests and activities. The site uses these tags to suggest compatible dates. The tags provide natural icebreakers in online conversations.

HelloPinay dating profiles come from all around the globe, so Mark has used Wikipedia to foster learning about different parts of the world. Every user’s location automatically links to a Wikipedia page describing his or her home city in their country.

The HelloPinay algorithm calculates a popularity, responsiveness, and authenticity rating for each user. These ratings are useful information for members viewing profiles and looking for an authentic match.

As far as communication goes, HelloPinay allows users to send text, audio, and picture messages. What’s more, HelloPinay has a group chat room called Locales where singles can get to know one another in a casual environment. The names of the chat rooms are a nod to popular places singles meet in real life — as in, the Beach, the Mall, or Disco.

A free basic membership offers free browsing and some contact options, but upgrading to a paid membership can take things to the next level. The paid membership unlocks unrestricted messaging, authenticity ratings, incognito browsing, and other premium features. HelloPinay does not have recurring payments for any of its membership plans.

Over the years, Mark has seen firsthand how impactful HelloPinay can be in sparking new friendships and relationships.

Within a year of the dating site’s launch, Mark was on a motorcycle ride in the mountains of Cebu City when he met a German tourist named Dirk. Coincidentally, Dirk was also exploring the area on a motorcycle. The two men got to chatting, and Mark offered to show the newcomer around the Philippines.

They were sitting down over beers later that day when Dirk mentioned he had recently fallen in love with a Filipina woman named Jobel. Where did this international couple meet? On a small dating site called HelloPinay.

Dirk and Jobel met on HelloPinay years ago and have been in a relationship ever since.

“I was completely floored, to say the least,” Mark said. “It took Dirk a while to believe that I was the owner of the site.”

A year later, Dirk traveled to the Philippines once again and invited Mark to Leyte for a birthday celebration at Jobel’s rice farm. The couple have remained friends with Mark and are still together to this day.

“I really love to promote the site to everyone I can,” Mark said. “Most people here are genuinely interested in joining and are grateful to have me tell them about it. More and more, people tell me that they have heard of it already, or that they have already joined.”

Looking ahead, Mark has a lot of ideas on how to grow the dating site and foster more meaningful connections. He said he’s interested in expanding HelloPinay’s travel functionality and hosting in-person events or meetups once COVID restrictions are lifted.

“My plan has always been to make HelloPinay travel-centric,” Mark said. “When we get rolling again with international travel and people are using our travel features more, I have some cool new functionality to add.”

Mark launched HelloPinay in 2017 in an effort to make the romance and beauty of the Philippines more accessible to people around the world. He has used innovative technologies to continually improve the user experience and make matches based on shared interests and values. As a result, countless love stories have taken singles on travel adventures across borders.

Anyone interested in dating someone in the Philippines can create a free dating profile and explore the local prospects.

Even though the COVID-19 pandemic hurt the travel industry, it seems to have fueled interest in international dating. Over the last year, HelloPinay saw record gains in registrations and online traffic. Mark said he expects that growth to continue in 2021, especially as international travel becomes easier and safer.

“I believe we are the best Philippines dating site,” said Mark with confidence. “The best software has always been built by those individuals who are also driving the vision of the product, and that is what we have here at HelloPinay.”