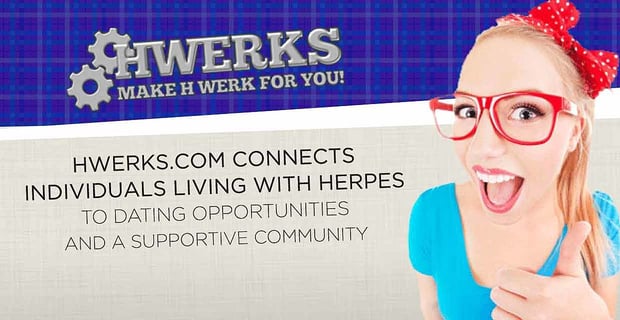 HWerks.com Connects Individuals Living With Herpes to Dating Opportunities and a Supportive Community

The Short Version: HWerks.com is a dating site designed to provide those living with herpes with a voice, a sense of community, and the chance to find love. The site not only offers ways for members to meet like-minded romantic partners and social groups, but it also aims to halt the spread of misinformation. HWerks inspires members to live their lives to the fullest and develop relationships — both romantic and otherwise — with others who share their condition.

A herpes diagnosis can be scary, and those affected not only worry about the virus and its impact on their bodies, but they may also be concerned about their dating lives.

“If a doctor says you have herpes, you freak out and wonder, ‘Who’s going to want me?’ You feel like you can’t tell your family or friends,” said Dex, the Owner of HWerks.com, an online community and dating site for those who are living with herpes.

A herpes diagnosis doesn’t mean that your dating life is over. Far from it. That ‘my-life-is-over’ mentality is what Dex set out to counteract with his own platform.

HWerks, founded in 2007, is a space where people with herpes can find like-minded singles who understand their struggles — since they have the infection, too. The site offers a respite from other dating experiences in which those living with the virus may be stigmatized because of their condition.

HWerks was designed to help people with herpes find support and like-minded people.

HWerks isn’t just a place to meet romantic interests. It’s also a place where people can find much-needed information and a supportive community.

One of the primary reasons that Dex created the site was to counteract the lack of understanding about herpes and those affected. Some people — even those recently diagnosed with the virus — believe that the only people who are highly promiscuous can contract it. In reality, that stereotype is far from the truth; many of HWerks’ users contracted the virus by sleeping with one person, often within a committed relationship.

“When you go to a site like HWerks, you realize other normal people have herpes, and a whole new world opens up,” Dex said.

Normalizing Herpes for Those Living With the Infection

More than a decade ago, Dex saw the need for a dating site specifically for those living with herpes because they weren’t always treated well in other online spaces.

“Only two websites were designed for individuals with herpes back then, and they weren’t very good at doing what they did,” he said. “They wanted to say users could only date people in the community, and if they didn’t like you, they would throw you off.”

At first, HWerks was created exclusively for people in Chicago, but not long after its founding, the site grew drastically, attracting members from all over the United States.

HWerks has an understanding community of people who are ready to provide advice and support.

One of the biggest draws of the site is that its users fit into so many demographics and range in age from their 20s to their 60s. And members come from all walks of life.

“Herpes doesn’t discriminate. It doesn’t care if you’re a doctor or lawyer or work at a grocery store. HWerks’ members are normal people who have normal jobs,” Dex said.

These users typically meet others near them for dating or group support.

“You might have a group in your area, like a local social group, or you can meet people on the site. We’ve got video chat through which people can talk to each other. That’s the fun part,” Dex said.

Unlike traditional dating apps on which users typically opt to meet others in their own city, HWerks members are often willing to commute long distances for romance.

“This community is a lot smaller, so we’re more open to dating someone who is a half hour or an hour away. Eventually, one of them will make the move,” Dex said.

Halting the Spread of Misinformation and Myths

Dex is so passionate about HWerks because he also lives with herpes. And he knows that others feel as if they have nowhere to turn when they’re first diagnosed. That’s why he is planning upgrades to the platform to help dispel myths and get information to users more quickly.

“I do other things, but this is my priority. And I answer every single email that comes in. Our site is going to have built-in chat support. If you have a question, it’s going to go right to me,” Dex said.

Many newly-diagnosed users who join HWerks aren’t necessarily interested in dating. They just want to meet others with their condition and ask questions without judgment. HWerks users are typically more than happy to address these concerns. They’re so supportive because they’ve all been there, Dex said.

On the HWerks blog, Dex tries to dispel many common myths about living with herpes.

People often visit HWerks seeking information, and they can find plenty on the site’s blog. There, readers can find posts on a variety of important topics, including articles about dubious herpes treatments and reports on clinical trials that offer hope for a cure.

Dex also addresses a few of the most persistent myths he’s heard about herpes. These include the belief that if someone does not have a current herpes outbreak, they cannot spread the virus. Others believe that a condom can stop the spread of herpes.

He also mentions how difficult it is to get tested for herpes.

“They don’t test for herpes if you go for an STD test,” Dex said. “You have to ask for it, and they may not give it to you because it’s expensive. A lot of people just don’t know they have it.”

Now that HWerks has an established and active membership base, it is looking to the future of connecting people with herpes. And it all starts with safety and security.

Part of this initiative is more proactive spam prevention. One of the most persistent spam topics targeted to people with herpes is a false cure for herpes. Dex doesn’t allow any products touted as a cure for the virus to be sold on HWerks.

To prevent spam and bots, HWerks charges a nominal, one-time fee to become a member for life.

“With lifetime paid membership, everybody is on the website for as long as they want to be,” Dex said.

Invested members can be even more supportive of one another, which is the site’s primary goal. Though herpes has become less stigmatized over time, it is still a virus that most people don’t want to discuss with non-infected partners. HWerks is a place where those living with the virus don’t need to feel like outsiders.

“I want to get people more comfortable with having herpes. People with herpes are just looking for acceptance,” Dex said. “Over time, having herpes gets easier. When you first get diagnosed, you won’t believe that. But it’s true.”