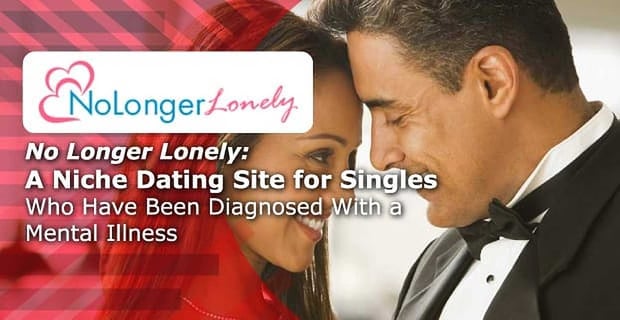 No Longer Lonely: A Niche Dating Site for Singles Who Have Been Diagnosed With a Mental Illness

The Short Version: Singles who’ve been diagnosed with a mental illness may feel anxious about joining a general dating site and fear that they could be judged, harassed, or rejected because of their condition. These singles often feel isolated and despair of meeting someone who understands what they’re going through. That’s something Jim Leftwich set out to change when he launched NoLongerLonely.com, a niche dating site for men and women with mental illnesses. Since 2004, No Longer Lonely has built a global community for singles who have been diagnosed with schizophrenia, bipolar disorder, PTSD, OCD, and other mental health disorders — because who better to understand what you’re going through than someone who’s gone through it, too? Over the years, No Longer Lonely has facilitated many friendships, relationships, and marriages by offering a safe place where people with mental illness are welcomed instead of stigmatized.

Jim Leftwich knows what it’s like to struggle with a mental illness. He was diagnosed with schizoaffective disorder as a young man, and it has taken years of treatment for him to find balance in his life. He has been in a psychiatric hospital, lived in halfway housing, and worked his way back to good mental health so that now he is a self-supporting, semi-retired director of a college library.

He may have stumbled at first, but he didn’t let his diagnosis stop him from achieving his goals. In fact, Jim doesn’t believe a mental illness should stand in the way of anyone seeking happiness, stability, and love in their lives. He’s made it his mission to challenge the stigma around mental illness and empower individuals to overcome their personal challenges, particularly in the social arena.

In 2004, Jim changed the dating landscape for singles like himself — that is, singles who have been diagnosed with a mental illness — by launching a niche dating site for the mentally ill. It was the first dating platform to exclusively target this underserved population in the dating scene, and it garnered media attention from CNN, Huffington Post, The New York Times, and Narratively.

In 2004, No Longer Lonely became one of the first dating sites to cater to singles with mental illnesses.

“I’ve been blessed with a recovery that most people don’t achieve,” Jim told us. “Now I just want to help more people and send them a message of empowerment. Mental illness is not something that should hold you back.”

NoLongerLonely.com has 22,000+ users and is the leading dating platform for mentally ill individuals around the world. Anyone diagnosed with a mental illness can sign up to the dating site for free and see what the online community is all about. The site connects people who have been diagnosed with schizophrenia, bipolar disorder, OCD, personality disorder, PTSD, and numerous other mental illnesses because such people can relate to one another’s experiences

It doesn’t cost anything to create a profile on No Longer Lonely. The dating site even offers a two-week free trial for all members, so you can take a look around and get a sense of how everything works before investing in a membership plan.

Jim said it’s important to him that his members feel they’re getting a good value from the site. “I want them to say, ‘That was a good investment,'” he told us. No Longer Lonely has three membership plans — a one-month, three-month, and lifetime. Roughly 60% of users go for the lifetime plan because they’re interested in playing the long game and putting in the time it takes to find the right person.

The sign-up process starts on a helpful note by offering profile creation tips, including how to craft an attention-grabbing headline and why it’s important to be honest about what you’re looking for.

From there, it’s a pretty standard put-in-your-email and choose-a-username process. When you’re creating your profile, you can choose to disclose your height, weight, and a personal bio, and you can also fill in optional fields for your transportation, working status, and living situation. Members may opt to share their diagnosis as well if they wish.

No Longer Lonely promotes transparent dating profiles with detailed information. Members can let people know upfront if they’re living in Section 8 housing or suffer from schizophrenia. No Longer Lonely wants singles to feel safe talking about their personal situations and health. It’s not some dirty secret, not here. You don’t have to add a picture to your profile to browse the site and send messages. However, users with profile pictures are often more successful on dating sites because they look more legit.

Once you’ve gotten your profile squared away, you can browse lists of members who are online now, members celebrating birthdays, and new members, or they can conduct a detailed search by gender, age, diagnosis, and location to find a compatible individual on the site. No Longer Lonely also has a live chat room where members can mix and mingle anonymously. “Your chat room is the coolest,” said Michael, who lives in a small town in Montana. “The friends I’ve met on NoLongerLonely.com make the bad days a whole lot better.”

“I try to create a sense of community,” Jim said. “Most dating sites are impersonal, so I try to make it a more personal thing. You know, I’m just like you, and I run the site.”

Singles who have a mental illness undoubtedly have some reservations about posting their personal information on the web, especially a dating site. That’s why Jim goes out of his way to ensure No Longer Lonely is a secure, safe, and private place to make friends and date. He fosters a friendly, judgment-free atmosphere where people don’t have to worry about fake profiles or spammer bots.

“The security of the site is a top priority for me,” Jim said. “I take great care in checking all incoming profiles and keeping scammers out of here.”

“I found the greatest man I could ever expect to meet on this website… we’re getting married next spring.” — Laura, a No Longer Lonely user

Jim told us he checks IP addresses and monitors profile content to ensure everyone on No Longer Lonely is there for the right reasons.

No Longer Lonely is the oldest and largest dating site for adults with mental illness, and it has stayed operational and successful for so long because of the diligent oversight that has kept it free of abusive language and harmful behaviors. Members know they can trust this platform to safeguard their information and deliver a friendly environment where they can meet people who share similar life experiences.

Not everyone thinks to write back to a dating platform after they’ve met someone and walked off into the sunset together, but Jim said he has heard from some couples who said they met and started dating because of his site. He estimated that No Longer Lonely has already led to over 40 marriages, and he hopes to grow that number over time.

No Longer Lonely has inspired countless personal connections between people with mental illness.

Going beyond just dating, No Longer Lonely has created an online community where people with mental illness can find all types of interpersonal connections. Whether they want to vent on the chat rooms or flirt in a private chat, the dating site allows people to expresses themselves (so long as they use appropriate language) without fear of judgment.

A majority of No Longer Lonely users (around 70%) live in the US, but the site also has members in 44 other countries, most notably the UK, Canada, and Australia. Jim said members sometimes form international friendships and long-distance relationships on the platform. He told the story of one single woman who flew to England to meet a man who struggled with a social anxiety disorder. They’d been in contact for months before deciding they felt comfortable meeting in person and taking their relationship to the next level.

Online dating can offer people with mental illness a non-intimidating way to explore their dating options and connect with people around the world. Physical boundaries and mental blocks don’t have to limit love on No Longer Lonely.

“There’s a luxury to dating someone who has been through similar things,” Jim said. “I’m fighting against the mindset that’s stacked against us.”

Over the years, Jim has made a name for himself as a pioneer in a niche dating space. No Longer Lonely started as the passion project of someone who understands the challenges faced by people with mental illness — and now the online community includes tens of thousands of active members. By providing simple, reliable, and targeted online dating resources, Jim supports singles on the path to good mental health.

“Everyone’s lovable. Everyone has someone out there for them.” — Jim Leftwich, Founder of No Longer Lonely

The mission of No Longer Lonely is right there in the name. The niche dating site encourages singles with mental illnesses to find comfort, solidarity, and romance in a safe space designed to meet their needs. It’s free to join the dating network and make positive strides toward the kind of life you want — and the kind of love you deserve.

“It’s good to have companionship and seek love,” Jim said. “Just because you’ve been diagnosed with a mental illness, that doesn’t mean you’re not capable of enjoying everything everyone else does.”