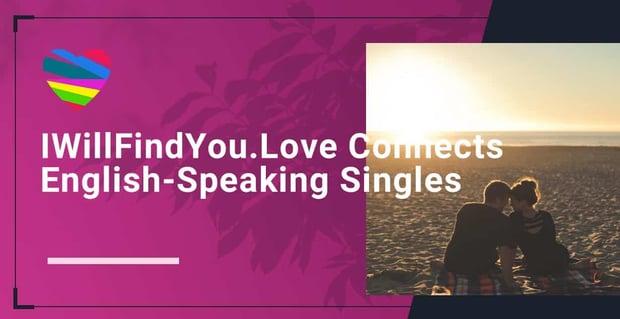 The Short Version: iwillfindyou.love is a free dating site that connects English-speaking singles around the world. Most of its members are in the U.K., and it’s growing more popular in the U.S. Every feature on the dating platform is free, so users don’t have to worry about subscription plans or hidden fees. Over the last five years, iwillfindyou.love has attracted more than 30,000 users and made a name for itself as a trustworthy and free international dating site.

Martin Tomsik is a web developer who sees a lot of promise in online dating. He and his wife met on a dating site, and they are now raising a daughter in the United Kingdom.

Inspired by his success, Martin decided to build a dating website that could facilitate strong love matches and conversations. iwillfindyou.love wasn’t his first foray into this field. He had built another dating platform in the early 2000s as a business experiment, but interest in online dating was low at the time, so the project didn’t take off.

iwillfindyou.love is the passion project of a web developer who met his wife online.

Today’s landscape is another story. Martin launched iwillfindyou.love in 2016, and it has grown popular in the U.K. and abroad. Fast-forward five years, and the site boasts having 30,000 active members. And Martin said he enjoys helping this niche community grow.

“Dating sites help people find each other much faster, and I wanted a hobby,” said Martin with a laugh. “Basically, I started the website because I was curious to see if it would work.”

Out of this humble idea, iwillfindyou.love was born. The platform has attracted online daters with its free communication features, and its straightforward interface is a relief for singles who are tired of playing complex matching games or taking lengthy personality quizzes just to meet a date.

iwillfindyou.love levels the playing field and gives users the access they need to make a meaningful connection and potentially fall in love.

“It’s a simple website where you can like, message others, or search people by location, age, and gender,” Martin told us.

Free Features for All Members

In its first few years, iwillfindyou.love had a relatively small following. Signups were few enough that Martin could screen and verify the profiles and photos by himself.

But then, on a fateful day in 2019, the website skyrocketed in popularity, and it never looked back.

“When I started the website, it wasn’t very popular. As soon as my daughter was born, the same day in 2019, for some reason, the users started coming in, and it went from 20 users per day to hundreds. I’m not sure why this happened, but it was a sign for me to keep doing something with it,” said Martin.

The registration process for iwillfindyou.love is quick and easy. The first step is to create a dating profile and upload at least one photo. All new profiles and photos must meet the standards of the site in terms of quality, authenticity, and appropriateness — otherwise they will be deleted. Martin is currently working on an AI feature that can monitor the network and flag fake profiles or photos automatically.

Once their profile is complete, users can set dating preferences and conduct local searches for their ideal match. If they see someone who looks interesting, they can send a like or a private message without bothering with payment plans. Additionally, they can see which users have visited their profiles for free.

“The website is free. That is our niche. All the features for all users are free, from registration to unlimited access. You can send as many messages as you want, and you can like people, but you can’t like more than five people per hour for security reasons,” Martin told us.

If singles ever run into trouble on the dating platform, they can hit the block button to stop incoming messages from an undesirable person, and they can report that dating profile to the moderators. In cases of online harassment or romance scams, the profile will be removed from the membership base.

Over the years, iwillfindyou.love has cultivated a strong network and provided helpful guidance for making an online match with real relationship potential.

About 80% of the site’s members live in the U.S., and the other 20% live in English-speaking countries in the United Kingdom, Australia, and the European Union. It currently reaches 20 countries and territories. Site users range in age from young adults to senior citizens, but the majority of users are between 24 and 35 years old.

Single men outnumber single women on the dating platform. Martin estimated that about 55% of active users are male, and 45% are female. That means single women can expect a lot of attention from local and international straight guys.

iwillfindyou.love started as a U.K. dating site, and it has expanded on a global scale.

In addition to its free services, iwillfindyou.love has free dating advice for singles seeking love and relationships. The blog explains how online dating works and provides strategies for romantic success.

The blog is also an outlet for dating news and site updates. For instance, the blog recently announced that the number of likes each profile receives will be listed on the user’s page.

Throughout the last year, iwillfindyou.love has posted a lot of content related to dating during the pandemic. One article argues that social distancing can be a good thing for online daters because it gives them the space and time to get to know one another without feeling rushed to meet in person.

“Singles will be able to chat without any kind of awkwardness on an online dating site,” the dating experts say. “It enables them to shed their inhibitions. It will result in a successful date with the potential of turning into a long-term relationship.”

Whether it’s advising site members to update their photos or helping singles stay hopeful in the face of rejection, the iwillfindyou.love blog is an important resource with useful tips for finding love.

Martin has run iwillfindyou.love as a one-man show for the past five years, and he has seen it grow exponentially in that time. Now he’s exploring options to grow the company and its revenue. He told us he wants to hire team members and monetize the dating site within the next few years.

“I didn’t expect any profit at the beginning, but we are finding more and more users these days,” Martin said. “So I will monetize it a bit eventually. It’s going according to plan, but slowly.”

Martin assured us that the monetization won’t dampen the fun or the promise of the free dating platform. Plenty of features will still be available at no cost.

Martin is currently working on updating iwillfindyou.love so it will more closely resemble other modern dating sites. The V2 site will be available on multiple mobile devices, including tablets and phones, and will offer real-time chat and notifications. Other improvements will include in-app calls, better fraud alert features, and faster load times.

Martin’s passion for online dating began in 2000, and he has found personal romantic success and business opportunities through this medium. Martin said he hopes his work on iwillfindyou.love will lead thousands of singles to meet their special someone and start a family — just like he did.

“I love helping singles to meet each other like we did. It’s amazing that you can connect to others you never would have met,” he said.