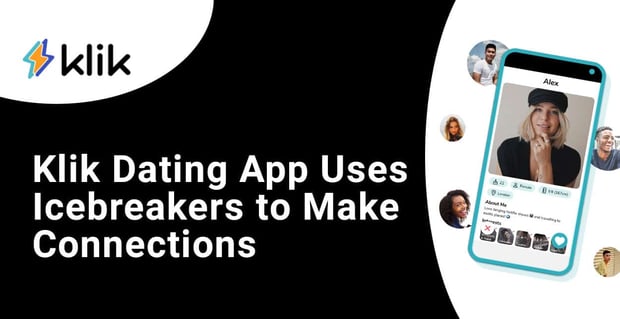 The Short Version: Connections can feel superficial, and matches can quickly become dead ends for singles new to online dating. But the Klik dating app, which recently rebranded from CLiKD, seeks to change that dynamic by connecting singles through shared interests and relationship goals. App users must first answer three icebreaker questions before matching with someone. That provides users with conversation topics and ensures they share common interests before communicating.

Studies show that online dating is more likely to end in frustration than with a long-term, meaningful relationship. That can keep many singles looking for lasting connections away. According to a 2021 Pew Research survey, 12% of adults responded that they met their partner or spouse through a dating app or website. Overall, 45% of online daters said they felt more frustrated than hopeful.

One reason is that many dating platforms and apps are designed to connect people primarily on physical appearance. When singles mostly rely on pictures to decide whether a person is a good partner, they can often make the wrong decision. That wastes plenty of time and can cause a lot of heartbreak.

The team behind the Klik app set out to change that.

Klik, which was previously called CLiKD, has a different strategy. Its profiles include photos, which are necessary to determine physical attraction, but the app also uses a more innovative process.

The designers created the app to connect users based on common traits and interests. That helps distinguish it from so many others on the market.

“After a lot of research on what market to go into, I decided that the dating sector had a lot of potential and was crying out for disruption,” said Michael Blakeley, Founder and CEO of Klik. “Soon after, we launched what was then CLiKD, now called Klik Dating App, and have been innovating ever since.”

A Dating App That Began as a Passion Project

Michael didn’t always work in the dating industry. For years, he pursued careers as a lawyer and a data protection and compliance officer. It was good work, but “about as exciting as it sounds,” he told us.

So he started working with an accelerator to explore new passions and ideas. That’s when he decided to change his life.

“I saw what the startups were doing and how they worked,” he said. “I wanted to do something that was more creative and that I had more control over, so starting my own business was a must.”

He wanted to solve a problem that so many singles faced when trying to find meaningful connections through dating apps. Many popular online dating platforms were based on the idea that superficial judgments and lust could turn into long-lasting love.

“We feel that today’s dating world is too superficial and focused on looks, so we aim to provide a platform that users can create meaningful relationships through,” he said. “That’s the main reason we have our icebreakers and dealbreakers.”

Dealbreakers are questions — and they are one of the most popular features on the Klik platform. That’s because everyone has certain traits they can’t tolerate in a partner. Since it’s better to test communication compatibility, the team decided to include icebreaker questions after a pair matches, but before they get too far into communicating.

Users can write their own icebreaker questions or choose from a curated list.

A Free Way to Match and Chat with Other Singles

One example Michael used for an icebreaker question helps identify whether the other person is interested in a hookup or wants something serious.

“’When would you first sleep with someone?’” he suggested as an icebreaker question. “The options are ‘A few dates in’ or ‘Not till Married.’ This works when one person has strong beliefs on the matter and only wants to match with others who share those beliefs.”

The team asked volunteers to test the app to give feedback about the process, and they received stellar reviews from the start. Icebreakers allow others to know upfront what users are interested in and want to talk about. That can offer an easy way to start a conversation. Users can see if they share common interests or beliefs right away.

“It’s lovely to be the bridge in allowing people to find someone that they can spend the rest of their lives with,” he said. “This is one of our biggest aims as a company.”

Klik users can create a profile, match, and chat with other singles for free. They can upgrade to a premium membership if they want to access other helpful features. Klik free users have a limited number of profiles they can see every day, and premium members can super-like someone and take advantage of profile boosts to get noticed. Paid members can also rewind and receive second chances.

Michael said the team has heard many success stories from people who met someone special through the dating app.

“In 2017, we had an intern named Daria who participated in our 10 dates in 10 weeks challenge,” Michael said. “Two dates in, she found a boyfriend and is now engaged.”

Michael said the Klik team is currently in the final stages of user testing and refinement before launching the rebrand that will officially change CLiKD to Klik.

“We’re very excited about this and have been doing extensive testing to ensure that users have a smooth, high-quality experience,” he said. “As for 2022, we’re coming out of public beta in January for a full launch.”

The company also plans to launch a new service called Global Dating Academy. It will help users connect with other companies and brands in a centralized marketplace. There, they can share expertise and receive credits and discounts on some of the most popular business resources, including AWS, App Radar, and SEMrush.

The idea, he said, is to accelerate some of the best new apps and create a digital family that can support each other as they grow and help people around the world.

But the dating business is all about people. That’s why Klik also has a blog that shares dating tips and wisdom with its members.

For example, its post on the best online dating questions recommends singles ask potential matches about their passions.

“The truth is not everyone is lucky enough to be doing a job that they’re passionate about,” the author wrote. “This question is great for people who aren’t doing their dream job yet.”

Michael said the goal is always to help more people fall in love and find romance — however they define it.

“We hope to create a lot of love and laughter through our app. And help people form meaningful and long-lasting relationships,” he said.