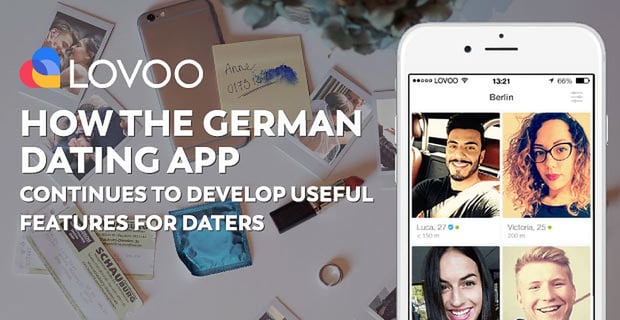 LOVOO: How the German Dating App Continues to Develop Useful Features for Daters

Short version: As a small, German dating platform, LOVOO still beat other popular dating apps to market with now-ubiquitous features like GPS-based matching. The company has since used innovations in technology to move beyond Germany and help users develop relationships throughout the world. Now, the company is shifting its focus to the future of dating again. LOVOO is enhancing its platform with features like livestreaming, video chat, and a messaging tool called Icebreaker, that allows users to introduce themselves to others — even if they haven’t matched.

As new dating apps pop up touting fresh ways to connect with singles, they’re often built on the innovations of the platforms that came before them. And while dating apps may come and go, those innovators continue to pave the way forward with next-generation features and improvements.

LOVOO, launched before Tinder in 2011, is one of the mobile market’s original dating apps. It was founded by a group of seven friends in Germany who came up with the idea after operating a social meeting network in their hometown of Dresden from 2004 to 2011.

The founders weren’t funded externally and had to create the app with minimal resources, but they still developed features that set the bar for future dating apps. For example, LOVOO was the first app to use GPS radar to show proximate users — a technology it still employs. Today, GPS-based matching is common on dating platforms worldwide.

Sebastian Matkey, LOVOO Senior PR and Content Marketing Manager, said the app’s goal is to connect daters with others nearby.

“The mission has always been to help people connect with others nearby,” he said.

But, of course, so much has changed in the dating industry since 2011, and LOVOO, which merged with The Meet Group in October 2016, knows it must keep innovating to help users find one another.

“Over the last 12 to 18 months, we’ve been through an intense rebranding process, with a new logo, new features, and a new philosophy,” Sebastian said.

It is all part of LOVOO’s belief that the future of dating apps will be experiential technology that doesn’t stick to today’s black-and-white structure.

“We don’t believe that algorithms automatically match people, or that we should promise people that they’ll find the love of their lives,” says Sebastian. “Rather, we acknowledge the complexities of dating and provide an app that accompanies you along the way while you gather personal experiences.”

With this realistic outlook on modern dating and technology, LOVOO is on a mission to stay on the leading edge of dating apps for years to come.

LOVOO, available on iOS, has succeeded where so many other apps have failed because it continually adds new tools while updating its current ones.

One of LOVOO’s most popular features is called Live. With it, users can livestream their day to other users from their point of view. And soon, the platform will offer a one-to-one livestreaming option.

“More than 20 million minutes were spent in Live in a single day, up 37% over our highest day in March,” Sebastian said. “In June, we had approximately 100,000 broadcasters and 700,000 viewers on The Meet Group’s combined apps.”

And Live has become so popular because it offers daters a more personal connection to each other.

“We believe in dating with additional entertainment that helps you become less lonely and adds authenticity at the same time,” Sebastian said.

Another LOVOO feature that users are excited about is Matching, a gamified tool that members can use to meet new partners. With Matching, users tap the heart on another user’s profile. If that person then returns the tap, the two are matched. Matched users then have the option to chat with one another.

Radar, the GPS-matching with users who are nearby, remains one of the app’s most used features. Icebreaker, another commonly-used service, sends messages to those with whom users haven’t yet matched.

Love Stories With Data to Back Them Up

LOVOO remains popular with daters because of so many well-documented success stories generated by the platform. Loving partnerships fostered by LOVOO are common, making the platform appeal to daters seeking serious relationships.

“In 2017, we had over 500 million matches and over 4 billion chat messages sent,” Sebastian said. “We also had 24 LOVOO marriages, 26 LOVOO babies, 53 couples who moved in together, and 18 couples where at least one person moved to another country. And 2018 looks similar, so far.”

Most of these matches take place in Germany’s top five markets: Berlin, Hamburg, Cologne, Munich, and Frankfurt. But the company is rolling out service into many other countries.

With an expansion plan and so many successes, some of the personal stories still keep the app’s development team grounded and inspired. Sebastian shared one of his favorites.

“One nice story is about Karmen and Pietro,” he said. “They were both on vacation in Croatia. They didn’t match on LOVOO, and she returned to Germany before him. But she forgot to switch on her GPS, so according to the app radar, she was still in Croatia.

So Pietro, who was still in Croatia, wrote to her. Initially, she thought he was Croatian, but once she realized what had happened, they started chatting. After he returned to Germany, they fell in love.”

LOVOO is Working on Even More Unique Tools

Though LOVOO was founded in Germany and geared to German users, the company continues to develop tools useful for daters around the world. And the diversity of the company’s employees — who come from Colombia, Spain, Italy, Libya, Puerto Rico, Poland, Russia, and Chile — help with that mission.

Employees like working for LOVOO because of its company culture, and the company was named Employer of the Year by the German magazine FOCUS.

“The future is now, and it will be exciting to see what happens in the next months and years in dating. A lot happening in this industry.” — Sebastian Matkey, LOVOO Senior PR and Content Marketing Manager

“We have flat hierarchical structures, lots of benefits (company gym, breakfast, team cooking), a startup atmosphere, and a family-friendly culture,” Sebastian said about the company’s offices in Dresden and Berlin.

After its merger with The Meet Group, a collection of apps meant to connect people, LOVOO is now focusing on creating more opportunities for American daters. The Meet Group, which is listed on the US stock exchange, is a key part of that strategy.

“We have very intense exchanges of ideas with our American colleagues at The Meet Group about expanding the platform’s functionalities and capabilities,” Sebastian said. “LOVOO employees are flying over to the US on a regular basis and vice versa.”

As one of the longest-running dating apps, LOVOO works hard to remain innovative in the dating platform market. And the company is optimistic about the place it will continue to have at the table.

“The future is now, and it will be exciting to see what happens in the next months and years in dating. A lot happening in this industry,” said Sebastian.