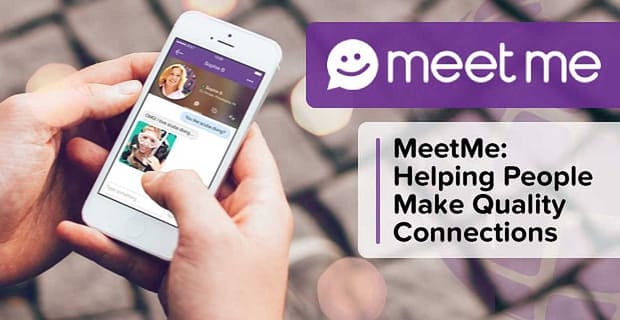 Founded by siblings Catherine, Dave, and Geoff Cook in 2005, MeetMe is a popular social networking app that encourages men and women to put themselves out there and get to know a variety of people — no matter if they’re looking for friendship, a date, or a relationship. With its fun chat features and relaxed environment, MeetMe takes the pressure off singles to find that special someone and helps them just enjoy the experience of interacting online.

Catherine Cook and her brother Dave were 15 and 16, respectively, when they started at a new high school in Skillman, New Jersey in 2005. It was one of those schools where everybody knows everybody, having been in the same classes together since kindergarten.

With solid friendships already formed and struggling to break into those social circles, Catherine and Dave decided to create a site where they could meet new people at their school. They turned to their older brother Geoff, who had experience in the field as the founder of EssayEdge.com and ResumeEdge.com, for financial support.

By outsourcing certain components they didn’t have experience doing (e.g., web development), the Cook kids were able to rapidly launch myYearbook.com (later to become MeetMe.com) in 2005.

Within the first week, more than 400 students from their school had signed up, and within 9 months, 2,500 times more students had joined from schools all over the country.

“That’s when we realized there was a bigger opportunity here,” Catherine said.

They rebranded the company’s mission to include helping anyone (not only high schoolers) anywhere meet new people, and myYearbook officially turned into MeetMe.com in 2012.

Now with over 1.1 million users of all ages, MeetMe has become one of the most popular social networks for connecting and chatting with new people around the world — whether it’s for friendship, dating, or relationships.

In 2014, MeetMe members were sending over 10 million chats a day. In 2016, it’s hit up to 30 million, which goes to show the chat capabilities are probably the most popular — and impressive — component of the site.

“The reason our chat feature has taken off is we made it more real-time and easier to send chats,” Catherine said.

And with 90% of MeetMe’s traffic coming from smartphones and the average mobile user using MeetMe an average of 159 times a month, the company has mastered the art of “apping” as well.

“It makes sense — if you’re waiting in line at Starbucks or on a train platform, you can check in and start a chat. The mobile experience allows for a lot more engagement,” Catherine said.

MeetMe continuously strives to increase not just the amount of these connections but also the quality. Currently, they have a team working on what they call a “recommendation engine,” using on-site behavior and feedback from members to show them people they’re more likely to reach out to or get a response from if they initiate the conversation.

They’re also in the middle of changing their feature “Feed” to “Discuss,” which will go from location-based to a broader online community that brings together people who want to talk about interests like fitness, movies, or anything else.

“That will give our users the opportunity to talk more in a group setting, which is a bit more like real life,” said Catherine, who likened MeetMe to the neighborhood bar. An online Cheers, if you will.

“When you go out, you definitely have one-on-one chats in the neighborhood bar, but a lot of the time you’re with friends. I think that’s important to merge the online and real world in that way,” she said.

A Pressure-Free Environment Keeps Them Coming Back for More

When signing up for strictly a dating site, the process often includes answering an in-depth questionnaire, choosing the right search parameters out of a seemingly endless amount of options, and determining the best match from thousands — all of which heavily rides on finding that special someone. MeetMe is more about encouraging people to get out there and interact with others — regardless of what it leads to.

In fact, 89% of members say they prefer to be friends with someone before dating, taking the time to get to know the person and make sure the connection really is there. Catherine said this kind of environment helps remove that shopping for humans mindset that tends to happen in online dating.

“When you go into a conversation or a chat looking to just connect and talk about something, I think it can feel a lot more serendipitous than if you are scrolling through profiles,” she said. “You can find someone to date, but at the same time, there’s no pressure to do that. I think that makes connecting with people easier.”

MeetMe may have more than 100 employees today, but it’s still a family affair, with Catherine as Co-Founder and VP of Brand Strategy and Geoff as CEO.

Catherine Cook created and still runs MeetMe with her brothers, Dave and Geoff.

“With 1.1 million users logging in every day, you can’t get to that scale without an amazing team that builds the product,” Catherine said. “We have a very fun team, very innovative, very smart, and I love them.”

Another big difference about the company is it isn’t located in busy cities like Silicon Valley or New York that are already diluted with so many dating apps.

Instead, it can be found in the quaint, charming town of New Hope, Pennsylvania (which has just over 2,500 residents).

Catherine said being in New Hope is one of her favorite aspects of MeetMe because it fosters a company culture that’s down-to-earth, relatable, and fun yet still hardworking.

“It’s a very walkable town and has been great for our culture because it allows people to go places and hang out,” she said.

When the Cook family brought MeetMe to life 11+ years ago, they put a unique twist on interacting and dating online. One of their biggest goals going forward is to keep that momentum going as they find even better ways to connect people for friendship, dating, relationships, or whatever it is they might be looking for.

“We’re only at the tip of the iceberg, so there’s a lot more we can do to create higher quality connections, allowing people to have longer and better chats with others, and that’s pretty exciting for us,” Catherine said.