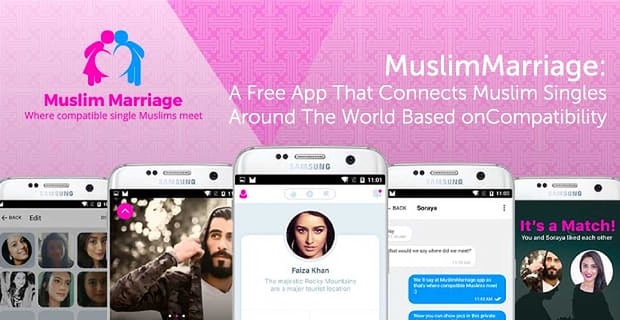 MuslimMarriage: A Free App That Connects Muslim Singles Around The World Based on Compatibility

The Short Version: Muslim men and women often struggle to find partners to whom they’re not only physically attracted but also with whom they could spend a lifetime. Luckily, the free app MuslimMarriage offers a modern solution for those daters. Singles can search Muslim communities internationally for potential love interests and use the platform to message, send photos, and even video chat to test the chemistry of their connections. User experience is taken seriously, with fake accounts quickly removed from the app, so you know you’re finding real people who could be the love of your life.

When I lived in Malaysia, most of the men I dated during the months leading up to Ramadan were Muslim. One picked me up on the back of his motorcycle and drove me to a hidden waterfall where we swam — just like he had when he was growing up in Penang.

Another invited me to a concert featuring a traditional Malay band and told me how people from the country used to discover purely polished, colorful gemstones in the stalks of wild citronella plants. Another man made me a plate of mango slices and traditional Egyptian coffee, which his father had taught him how to make.

We didn’t go out for beers, as I did on other dates, because these men did not drink alcohol, and when Ramadan arrived, dating went on the back burner. They focused on their faith, only contacting me to send me an occasional picture of a feast prepared to break the daylong fast.

These Muslim men had something else in common, too: their tales of how difficult it was to find a special someone. Each of them had seriously dated women who weren’t Muslim, but knew the relationships could never go anywhere because their families expected them to find a Muslim woman with whom they could start a family.

The MuslimMarriage app helps Muslims from across the globe find lasting love.

The modern Muslims I’ve met seek partners whom they can connect with on many levels. That is the same focus of MuslimMarriage, a free dating app that matches Muslim singles looking for both love and compatibility. It’s free to sign up and free to download on both iOS and Android.

For Muslims in the modern dating world, it can be challenging to find fellow Muslims to whom they’re not only physically attracted but also with whom they share common interests. With the MuslimMarriage app, singles can connect with each other — with the ultimate goal of sharing a meaningful, faith-filled life together.

Making It Easier for This Demographic to Find Love

The app represents the natural evolution of Muslim Marriage Solutions, a London-based website focused on uniting Muslim partners. A Muslim woman created the site and designed it to bring transparency to the Muslim dating industry by offering a modern approach to connections.

Of course, Muslims are on other online dating apps, but the problem is that many of those platforms are designed for hookups, casual relationships, or just friendships. Even on sites that tout marriage as the ultimate goal, many users aren’t clear, or honest, about their desires and intentions. Muslims who care about their faith — and those who hear the constant chorus of hints from their family members — need something more substantial than that.

Plus, many Muslims practice halal dating, which limits physical contact in premarital relationships, and MuslimMarriage caters to those daters.

Having marriage as the goal of interacting with other users is at the heart of Muslim religious teachings, but that’s become a rarity in the modern dating world.

One way that MuslimMarriage demonstrates its commitment to that objective is by having site managers remove anyone from the app who isn’t serious about marriage. The platform also has systems in place to rid the database of any fake users.

That is an important feature for anyone who’s thought they’d found someone special, only to discover that the user wasn’t real.

You can use MuslimMarriage wherever you are, whether you’re a single Muslim living in Malaysia, like my friends, or in America, England, Pakistan, India, Bangladesh, or Turkey, among many other countries where the app is popular. Muslim singles from all over the world log on to the app in search of marriage.

Plenty of Unique Features are Available for Free

Once you create a profile, most features on the MuslimMarriage app are free — and there are a lot of them. MuslimMarriage offers in-app messaging, which is incredibly important — as anyone who’s ever tried online dating knows. You need to be cautious at first when connecting with people, even when it’s clear that you are both very compatible. You also never want to share your personal information, like a phone number or an email address, before you become more comfortable with the other person. In-app chat makes it easy to socialize in a safe, neutral environment that is always kept halal.

Along that same safety front, MuslimMarriage features “locked snaps” so users can decide with whom they want to share their photographs. Snaps are hidden with a password. Once you feel comfortable with the friendship enough to chat easily, you can share your photos.

Another useful tool is the free video chat feature, which is a great way to ensure you can converse easily with another user — or to make sure they have the right energy before you meet them in person.

You can see a different side of them that their profile pictures don’t always capture, and find out if they talk like they type. While video chat can turn into a nightmare on other dating apps — filled with people who are only interested in hooking up — it is safe, secure, and halal on MuslimMarriage.

Why Compatibility is the Most Important Attribute to Muslim Daters

What sets MuslimMarriage apart from other Muslim dating sites is that it offers a compatibility score displayed prominently on each profile you view. This feature gets to the heart of halal dating: Yes, he is really handsome, but if he isn’t compatible with you, how would a marriage work? The site aims to make matches that will ensure more well-rounded compatibility in many facets of a long life together.

The app is available in 10 languages, which keeps alive the romantic idea that you can find a perfect spouse who lives in another country.

A premium membership that gives users access to unlimited messaging and video communication is also available. Premium members can also add themselves to an exclusive “hot list.”

MuslimMarriage is the app that can give Muslims who seek others who are passionate about their faith an easier way to find each other and begin the rest of their lives together.