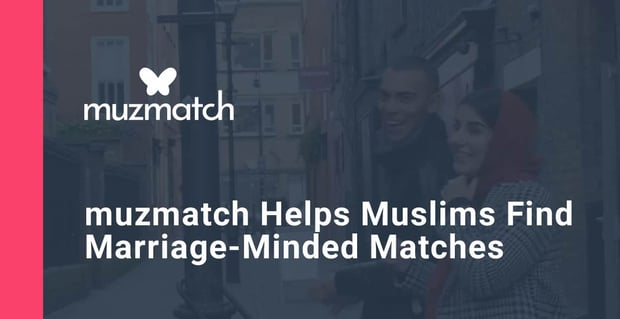 The Short Version: Muslims looking for a spouse didn’t have many options during government-mandated lockdowns brought on by the COVID-19 pandemic. Many turned to online connections through muzz (formerly known as muzmatch) instead of searching in person. The app has more than 5 million downloads, and developers added video and voice calling to make it even easier for people to find partners for life. Over the years, he platform has helped foster more than 130,000 weddings, following the principles of Islam.

Devout Muslims don’t date for fun. When singles find compatible partners, both parties should be marriage-minded. That is tough in person, but online it can be an even more daunting task.

Many Muslim singles have turned to muzz, especially during the COVID-19 pandemic, to find long-lasting love.

The developers of the popular faith-based dating app recently celebrated surpassing 5 million members in 190 countries. The app has also been a part of more than 130,000 weddings. One marriage, between Aisha and Sultan, in London even took place during pandemic lockdowns. Both lived in the United Kingdom and matched in March 2020. The couple got married just after restrictions were lifted in July.

Sultan said he had used a few Muslim matching apps to look for a “good, honest person who is really involved in Islam and ready to go on an adventure.”

Aisha said it only took a week of chatting before she knew Sultan was perfect for her.

“We were video chatting every day before we met. We saw each other and knew we got on really well,” she said. “We didn’t want to leave it. We were enjoying that initial spark, and we wanted to meet and see if it was good.”

Aisha’s heart melted when they visited a farm and Sultan stood in the mud to feed baby goats. He said he fell in love with her mind and her desire to always work toward being a better person.

“I started to see myself with her. I figured out she was a good person,” he said.

Sara Shaw, PR Manager for muzz, said their story is one of many the platform has fostered for single Muslims ready to find a life partner.

“Casual dating isn’t something that takes place with Muslims looking for love. There are strict parameters they adhere to,” Sara told us. “The feedback has been positive, and seeing how muzz impacts their lives is what drives me every single day.”

Membership Rose 13% During the Pandemic

Sara said the team behind the faith-based app was shocked to see such a rapid rise in membership at the beginning of the COVID-19 pandemic. The app reported a 12.6% increase in matches in the two weeks after lockdowns started. It also saw an impressive 13% increase in the number of members logging into the app just two weeks into lockdowns and social distancing measures.

The team surveyed its users and discovered that 83% of members had difficulty finding a spouse without seeing each other in person. Social distancing made it especially difficult for Muslims, who are careful to follow Islamic laws concerning casual dating. That’s when the muzz team decided to add a new feature.

It became the first faith-based dating app to launch video and voice calling features, both free to use.

“We launched the feature as soon as the world went into a full global lockdown,” Sara said. “When two people are messaging each other, there is a camera icon which you can click to start a video call.”

But since single Muslim men and women shouldn’t be connecting unless they intend to marry, muzz employs chaperones that read messages to ensure everything is Halal — or permitted.

Singles can read the messages, but they cannot interact directly. The practice offers a balance of freedom and respect.

Those who use muzz are serious about finding a spouse and getting married. Many sign up for muzz Gold to make that process even more accessible. The premium tier offers additional features and allows users to view unlimited profiles without waiting.

Premium members also receive one free Instant Chat every day. It’s always free to match and chat if both members enjoy each other, but this will grant a member access to connect with someone they hope will be flattered by the extra attention. Gold members can also change their minds if they’ve liked, passed, or blocked someone.

Gold members can add a list of personal preferences to narrow their searches. For example, they see a percentage match with each profile regarding height, marriage plans, Islamic dress, career, education, prayer level, photo privacy, and more.

Regardless of whether members have a Gold butterfly on their profile they can still benefit from other features, including sending photos and GIFs. The team has also developed what it calls the Haram Detector. This technology flags potentially inappropriate photos and allows recipients to report messages to the team.

If the photo or message is obscene, muzz immediately blocks the user. The goal is to give users peace of mind to use the app for finding a spouse, not a headache.

“We really care about safety and security for our members,” Sara said. “We’re not like other dating apps out there.”

muzz Connects Singles From Around the World

Sara said the platform recently completed a campaign for Black History Month in the United Kingdom and produced an in-house documentary to celebrate Black Love. The video chronicled the stories of some of the Black Muslims who matched through the app, fell in love, and decided to spend the rest of their lives together.

That was especially true for men, with 66% of male respondents saying they were unlikely to talk to someone even if they were feeling down. Jamil Anwar from East London said he and his male relatives struggle with mental health sometimes, but they don’t sit down and talk about it.

“I got to the point where I started putting on so much weight and losing confidence in myself,” he said. “But we’re all going through it. The most important thing is communication. Do not be afraid to reach out to someone.”

The idea is to support the Muslim community — and have fun doing it. Recently, muzz ran a campaign in the New York City subway system with signs that read, “Prefer shawarma to steak? You need muzz” and “1 million Muslims in New York and you’re still single?”

Of course, people can match globally with just a click of the heart icon on the app. Maybe a future spouse is in London, Indonesia, or New York; if they’re on muzz, Inshallah, you’ll connect.