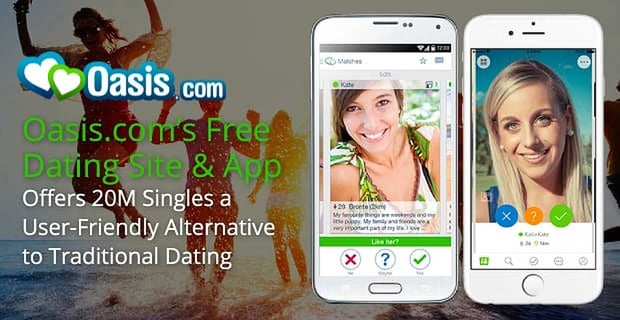 The Short Version: Singles don’t need a bunch of fancy tools to help them find romance — they just need a low-cost and accessible place to meet friendly single people. And that’s exactly what Oasis.com provides. This totally free dating site and app is available to singles of all ages, orientations, and nationalities. Although it was launched in Australia in 2008, the dating network has expanded internationally and is particularly popular in the US and South America. Oasis.com offers a simple and streamlined dating platform that gets out of the user’s way. All members have access to the communication features on the site, meaning they don’t have to pay a cent to chat with people around the world. Over 20 million members have taken advantage of Oasis.com’s mutual-matching system and met viable date prospects and love interests in their area.

In October 2015, a single woman was considering taking a break from dating altogether. That is, until she met her match on Oasis.com, a free dating platform with a global footprint.

The couple sent messages for a few days before exchanging phone numbers and talking on the phone for two hours every day. Finally, they had their first date at a coffee shop and turned their online romance into a real-life love story. They’re now living together with plans to get married and have children. They said in a testimonial that joining Oasis was the best decision of their lives.

“Without Oasis, I would have never met the love of my life,” the happily matched woman said. “Living on opposite sides of the state with no mutual connections, I have only Oasis to thank for having the life my partner and I now have.”

Oasis.com gives singles around the world the chance to find their soul mate.

Oasis.com is a popular dating site and app used by over 20 million people around the world. The site launched in April 2008 in Australia, but it quickly cultivated an international user base. Today, over 150,000 members join the Oasis Network every month in search of local dates and potential love interests.

CEO David Heysen and CTO Daniel Haigh have a combined 38 years working in the dating industry, and they have used that experience to help them design a useful, simple, and fun dating network for singles around the world.

Oasis.com became Australia’s top free dating site within a few years and is now making headway in the US and South America as well. The Spanish version of Oasis — Amorenlinea.com — has attracted active daters in Mexico, Colombia, Peru, Chile, and Argentina. There is also a Portuguese version of the dating site for singles in Brazil.

The Oasis Network appeals to young singles seeking everything from casual dating to long-term relationships. According to the dating site’s internal statistics, 48% of its users are between 18 and 35 years old, and 60% of users are male while 40% are female. The dating site is open to straight, gay, and lesbian singles.

It only takes 30 seconds to sign up to Oasis.com. You can choose to enter in your information yourself or connect through Facebook to auto-fill the basic details of your dating profile. All members can choose a username to go by on the site, which adds a layer of anonymity that a lot of singles appreciate. You can then opt to fill in sections about your identity, appearance, interests, and lifestyle or dive right into your Matches, a curated list of singles in your area.

As a free member on Oasis.com, you can browse the site for potential matches by using the custom search filters. You can see the entire profile, not just the picture, so you’ll get a well-rounded idea of who people are. If someone catches your eye, you can click “like” to make your interest known, and if the other person likes you back, you’ll be added to each other’s contact lists and can communicate for free on the site.

That’s it. There’s no need to upgrade or buy tokens to get someone to respond to you — on Oasis, everyone has the opportunity to connect with one another.

While the dating site is 100% free, you can pay for certain upgraded features, including removing ads from the app and site for a month.

“Oasis has put a lot of work into the design to make it as simple as possible,” said David  Heysen, CEO of Oasis Active, “yet keep it as informative as possible in a completely free model. Members have access to full profiles, not just a pretty face.”

Over 2,000 Testimonials Speak to the Dating Site’s Impact

Since its launch in 2008, Oasis.com has collected quite a few success stories from couples who met on the site, started long-term relationships, got married, and had children.

“I have to admit that I almost gave up on the idea of finding a match online,” said one user in a review. This single matched with someone with the user name R9, and they hit it off immediately. “We had both come out of bad relationships, but we found a lot to laugh about. We have been together now 15 months.”

“Thanks, Oasis, for all your help connecting me to the lady of my dreams.” — an Oasis.com user

Another user said she had been on Oasis.com for a few months when a handsome man requested her contact information. She decided to accept, thinking, “Just this last one,” and he was the last one. “Luckily, I contacted him because we have now been married four years with a 5-year-old daughter,” she said. “A true happy family!”

Thousands of similar stories can be found on Oasis.com’s website, but the team is most proud of the fact that two of its employees have found love using the dating site they worked on.

“Oasis has received over 2,000 amazing testimonials globally,” David told us. “However, we can’t go past the two success stories here in our very own office! Being able to watch them both go on to get married and have children has really hit home at the opportunities we are able to provide to millions of people.”

Countless singles have found love thanks to Oasis.com. The free dating site and app provide a low-key environment where men and women feel comfortable meeting new people, chatting, and seeing where things go.

For the past decade, Oasis.com has made the dating world a little brighter by offering singles a 100% free online dating experience. Looking to the future, the team hopes to continue growing its network and coming up with innovative designs and tools to help people connect. The Oasis founders told us they have some big plans in the works and look forward to improving online dating for millions of people worldwide.

“Everybody in the Oasis team is involved in all aspects of the company,” David said, “which helps everyone understand the product back to front but also allows for invaluable input from members who may not be considered in larger organizations. This helps us deliver the best possible product.”

What Should I Not Do While Dating?

How Online Dating Has Changed Society