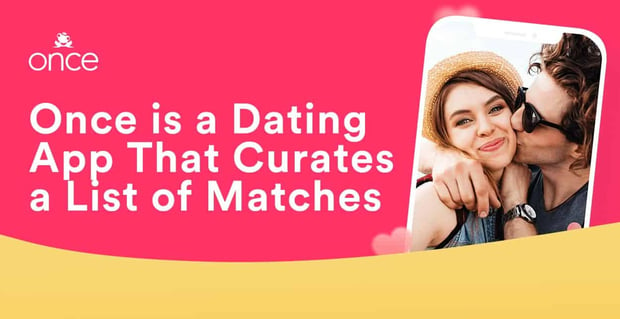 The Short Version: Once launched in 2015 as a new kind of dating app designed to spark quality matches and not keep singles in an endless swiping limbo. The Once app uses a smart algorithm to highlight a short list of dating profiles that refreshes every 24 hours precisely at noon. So far, Once has attracted over 10 million users in Europe, and it’s on track to grow on a global scale by partnering with the Dating Group. The Once app is free to download on Google Play and the App Store.

Online dating has gone through two major phases since its inception in the mid-1990s. The first phase was tainted by skepticism about meeting strangers online. Going into the new millennium, dating websites were stigmatized as a tool for the lonely and desperate.

Then as more tech-savvy singles came of age in the 2010s, swiping apps started to go viral. Casual dating thrived in this environment. The endless swiping lists encouraged singles to quickly move from matching to chatting to ghosting and treat each love connection as if it were a game.

The Once dating app recommends a short list of potential matches every 24 hours.

Now in the 2020s, that game has gotten old. The era of swiping has led to a rise in online dating burnout, so some matchmaking experts are looking for more quality-driven solutions to shake up the market.

Once is a dating app on a mission to put swiping to rest and usher in the next phase of online dating — which it calls “slow dating.” Since its launch in October 2015, Once has gone against swiping norms by creating a system where fewer choices and smarter matches are the key to success.

“The app provides meaningful connections based on a thorough analysis and frees people from countless swipes,” the Once team said.

Within a year of its launch, Once surpassed 2 million users in the U.S., the U.K., France, Switzerland, Germany, Brazil, and Ireland. As of 2021, Once has over 10 million users spread across Europe, and it has been acquired by Dating Group for $18 million in cash and stock.

Looking ahead, CEO Clémentine Lalande will remain at the helm of Once and continue shaping the future of online dating. “I am thrilled to join the Dating Group today, both because of their proven focus on post-swiping dating alternatives, and to leverage the huge synergies between Once and Dating Group,” she said in a statement.

A New Batch of Profiles Delivered Every Day

The Once app relies on a smart algorithm and matchmaking team to curate a short list of compatible dating profiles for each user. The app recommends a fresh batch of dating profiles once a day (hence the name) and gives users 24 hours to make a match before the profiles are replaced with new ones.

“Once is unique because it uses a combination of real human matchmakers and innovative digital technologies to pair would-be lovers,” the team said. “It offers people looking for a meaningful relationship a private, credible, secure and safe alternative to swiping hookup apps.”

A team of professional matchmakers work behind the scenes to make sure Once puts real relationship potential first. Its system encourages users to take their time and put more thought into their online dating decisions.

The app updates its targeted match list every day at noon.

So far, Once seems to be working out quite well for its members. The app creates over 50 million matches per month, and its 10 million users exchange approximately 5 million messages per day.

Once members can view their daily matches and chat with their mutual matches for free, so it’s not necessary to sign up for a paid subscription to meet someone on the dating app. However, some users have found a few paid perks can be helpful on the digital road to love.

The Once premium package gives users the ability to view a bit more than the average user’s daily allotment of matches. No waiting 24 hours for new profiles. They will be able to preview tomorrow’s matches and speed up their online dating experience a bit. Plus, premium members can also see who has liked their dating profile.

Upgrading to the VIP membership comes with even more valuable dating services. A Once VIP member receives three extra matches a day and can adjust location-based settings to ensure each match is local. The extra matches are selected from a list of the most active users on the app.

“Once championed the slow dating model,” the team explained. “It is a leading app in the dating category in its core countries in Western Europe and has built a profitable business.”

The Once app encourages its members to invest in every new match, conversation, and first date. Its thoughtful matchmaking system has proven effective at identifying compatibility, but it isn’t stopping there. By implementing the Places feature, the app can help turn online connections into real-life romances by recommending popular date venues in the area.

From coffee shops to cocktail bars, the Places list keeps tabs on the trendy spots where singles love to hang.

Once has become an online dating sensation by prioritizing quality over quantity.

Once uses AI technology to put singles in touch with promising matches. The algorithm learns about the user’s dating preferences through a combination of profile information and user behavior. This matchmaking system has led to countless first dates, relationships, and marriages.

The Once team has published several heartwarming love stories from couples who met on the online dating app and then hit things off in the real world.

“A few clicks, loads of messages — the match was virtual at first, and it’s now a true love story,” said Marie-Laure and Jean-Michel in a review of the app. “We met during summer 2016. We got married exactly one year after.”

“I immediately fell for Ana when the Once matchmakers suggested her to me,” said a man named Guillaume. “We talked for three months before meeting each other. Today, we are in a serious relationship.”

In the fall of 2015, Marion and Thomas started chatting on Once and made a date at a small bistro in Paris. The couple soon became inseparable. In May 2017, Marion and Thomas became the proud parents of twins. “Best app of the century,” Marion said in a testimonial. “I found my soul mate.”

Online dating started out as a deserted wasteland, turned into an overcrowded free-for-all, and now is (hopefully) entering a healthier phase where quality relationships can triumph over the swiping craze. Once has positioned itself as a leader in the movement to make online dating a more serious and efficient tool for singles across the globe.

When Once launched in 2015, it was a European startup with big plans. The online dating app grew by appealing to the heartfelt desires of men and women who wanted a smarter way to online date. Now as part of the Dating Group, the quality-driven dating app seems poised to slowly but surely take over the swiping world.

“We are the market leader of serious dating apps in Europe,” the Once team said. “Our ambition is to become the world leader and to allow millions of people to take the time to meet their soul mates.”