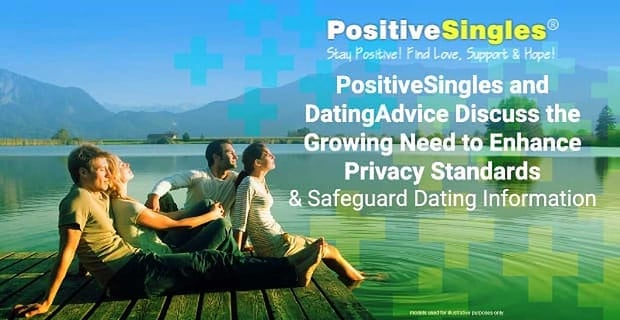 The Short Version: The first step to joining a dating site is filling out a profile to tell people about yourself. Sometimes the profile includes sections for personal details such as your income, occupation, or medical information. Singles disclosing this information often assume it will stay between them and the site, but that’s not always the case. Some dating sites don’t put adequate protections in place to ensure user privacy. PositiveSingles.com, a security-conscious dating site, is on a mission to change that. In 2001, PositiveSingles created a confidential online community to support people living with sexually transmitted diseases. Its members value their privacy, and the team works hard to keep all sensitive user data secure. In the wake of recent online privacy scandals, PositiveSingles has advocated for applying HIPAA-style protections to the online dating world, so dating companies will adhere to a high ethical standard when collecting, storing, and sharing user information.

Privacy is a hot topic in the online world right now. It seems like every day a new headline decries the misuse of data, the failure of security protocols, and the general negligence of online social networks when it comes to protecting sensitive information.

Some major companies (looking at you, Facebook) have made internal mistakes that left their users vulnerable. It’s not fake news. It’s a real problem that needs addressing. Some think the solution lies in tighter governmental oversight and data protection rules like those recently passed in Europe. Others believe the burden should fall to the companies to tighten their own practices and set higher standards for data protection.

In the online dating industry, PositiveSingles is preparing to do just that. This dating company, alongside its sister sites like HerpesPeopleMeet and HIVPeopleMeet, boasts having the largest community of anonymous users diagnosed with herpes, HPV, HIV, and other sexually transmitted diseases, and the California-based team recognizes the social responsibility they have to provide their 1.4 million members the privacy and security they deserve.

PositiveSingles is a trustworthy dating network that connects and supports singles with STDs.

Since 2001, PositiveSingles has given a voice to millions of marginalized singles and empowered individuals to share their stories and diagnoses without fearing judgment, rejection, or public exposure. The niche dating company challenged the stigma against people with STDs by fostering a confidential community where members can engage in an honest dialogue about health and dating.

In April 2018, PositiveSingles decided to take proactive steps to tackle privacy issues in online dating. The forward-thinking company has put significant resources into developing a plan to keep online users safe and raise the standards of protections offered by dating platforms around the world.

Passed into law in the US in 1996, the Health Insurance Portability and Accountability Act (also known as HIPAA) set down specific security rules to restrain health and insurance companies from disclosing patient and customer information. The measure was passed in response to growing concerns that the same technology that made it easier to collect and store patient information would make it easier for that same information to be released to the public to stolen by criminals. Sounds familiar, right?

Fortunately, the US government recognized the security risks involved and set up standardized practices for any healthcare provider who transmits health information in electronic form. HIPAA protected patients from having their sensitive information shared without their knowledge or consent. The law restricted how organizations could handle confidential medical records and set a high standard for consumer protections.

PositiveSingles wants to apply the principles of HIPAA to the online dating privacy crisis. The HIPAA approach means social networking and dating sites would be restricted from sharing personal user data and be held accountable for any leakages.

“We want to build up a common, applicable standard for dating site to protect users’ privacy.” — PositiveSingles

According to PositiveSingles, the HIPPA for dating sites would need to set rules for how private dating information is stored as well as how companies communicate their policies and notify users about internal data sharing practices. Dating companies need to protect Private Dating Information (PDI) with the same rigor and transparency that healthcare providers handle Private Health Information (PHI).

PositiveSingles wants to implement universal privacy standards and protocol that will ensure all dating companies safeguard sensitive user information. The dating company sees HIPPA as a prime example of how a few rules and definitions can keep people safe and improve the industry as a whole.

Acknowledging the Responsibility a Dating Site Has Toward Its Users

Over the years, PositiveSingles has highlighted over 60,000 STD success stories and fostered over 120,000 conversations on its site. Thousands of members use the platform to find solidarity, information, and romance. They’re there looking to open their hearts to someone special — not open their private lives to advertisers, hackers, third-party organizations, and the general public.

Unlike other dating sites, PositiveSingles has been vocal about its commitment to protect user data.

In 2018, Grindr, a popular gay dating app, admitted to sharing its users’ HIV status with two third-party companies as part of its standard debugging process. The dating app has now changed its privacy policy in reaction to public outcry and will not longer provide HIV-related information to vendors.

Such a breach of faith isn’t acceptable to the PositiveSingles team. “In light of what has occurred, PositiveSingles has now implemented a strategy to study how HIPAA-style privacy principles can help the situation,” Alex said. “Experts have since urged all online dating sites to learn from HIPAA security rules.”

PositiveSingles supports a vast network of members who value their privacy and expect a safe dating environment. Privacy is particularly important for singles with STDs because they are sharing medical information that they may not want anyone outside the dating site to know about. The PositiveSingles team understands the need for discretion and works hard to keep its user information confidential. The dating site and app has safeguarded the privacy of millions of people online and hope to set a new HIPAA-inspired standard for other dating platforms to follow.

PositiveSingles Leads Online Dating Into a New Era of Security

Singles in the online dating world are particularly vulnerable to privacy issues because they’re often sharing personal information on their dating profiles. When online daters disclose personal details about themselves, they do so under the assumption that only date prospects will see that information. However, some dating companies have not implemented satisfactory privacy and security policies to keep user information from being leaked or shared on the web.

PositiveSingles wants to foster an online environment where singles feel comfortable sharing their health statuses and other sensitive information, and so it has taken strides to tighten its own security measures and protect its user information.

In response to recent privacy scandals, PositiveSingles.com is making a positive effort to regulate privacy standards across online dating and give users greater peace of mind when they join an online network.

“Right now, the feedback has been positive and encouraging,” Alex said. “We are open to institutional cooperation to draft and sketch more details.”