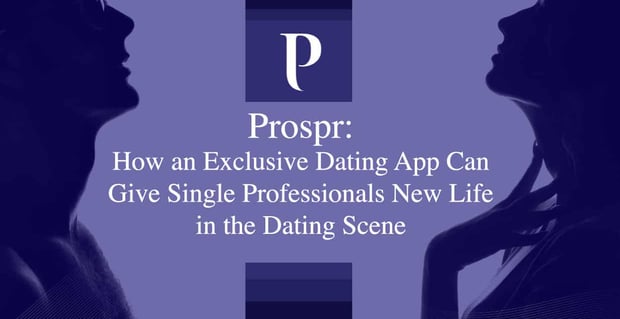 Prospr: How an Exclusive Dating App Can Give Single Professionals New Life in the Dating Scene

The Short Version: A dating app called Prospr is on a mission to fundamentally change the online dating scene by putting quality before quantity. The app requires users to pass a rigorous screening process when creating a profile, and users must answer a personal icebreaker question before sending a like to anyone in the community. In the last few years, selective daters have flocked to Prospr and praised its intuitive design, values-driven features, and exclusive singles network.

A single man with the username Jimmies MT was an early adopter of Prospr in 2016, and he recently wrote a five-star review about his experience on the up-and-coming dating app.

“This app design makes it easier to come through a person’s page in smooth way,” Jimmies said. “I think this program deserves five stars because it maximizes the basic purpose of dating: the opportunity to capture a woman’s attention. There is no place on the planet where you can come across so many attractive ladies.”

Prospr is a quality-driven dating app for singles looking for relationships.

Such high praise is par for the course for the Prospr team. Prospr’s goal is to streamline the online dating process and give singles more value in every match. From its detail-rich profiles to its personality-driven matchmaking, the app has implemented clever strategies to get singles to stop swiping and start connecting.

“Prospr has consistently offered me a fabulous experience,” Jimmies said. “Surely, if you need a top dating application, Prospr is the best.”

As an elite dating app, Prospr has many sophisticated screening and matching features that provide undeniable quality to today’s single professionals.

Users must apply to the Prospr team before they can use the app, and newcomers are generally waitlisted for 15+ hours as the team assesses the profile and verifies its authenticity. The exclusive dating community appeals to highly selective and successful singles who want to find a real and lasting relationship.

“Prospr is the ideal place for busy professionals as well as educated and well-mannered singles to connect and find the perfect match,” said Niels Niethammer, Director of Marketing at Prospr. “Prospr is for picky singles who focus on genuine connections. That’s why Prospr refrains from using profile card swipes.”

Prospr sets high standards for itself and its members. The team focuses on making dating easier because many of its members lead busy professional and personal lives, so they don’t have time to waste on a dating app. These singles often have high standards, and they need a fast-working and quality-driven dating solution to help them reach their romantic potential.

Instead of swiping, the Prospr app introduces singles in a more organic, compelling, and information-rich way. Users can add multiple photos to their profiles (integrating with Facebook makes this step even easier) to make them pop, and there are also open-ended prompts like “About Me” and “About My Match” to kick things off. You can also choose tags based on your favorite hobbies, movies, sports, and music.

All members have to pass muster and earn the approval of the Prospr moderators, who pre-screen waitlisted profiles day in and day out. “Since all members are carefully selected, they are already suitable going on a date with,” said Niels.

Prospr raises the bar in the online dating scene with highly sophisticated features and profiles.

Another unique feature on Prospr is the matchmaking system. The app now requires members to answer a question before they can like someone. This helps users get to know one another and start more meaningful conversations.

By encouraging people to show off their personalities in their profiles, Prospr has sparked many worthwhile connections between people with similar backgrounds, interests, and goals.

“Prospr cares about its users’ direct matchmaking results,” Niels said. “Connecting every member with another interesting soul happens immediately via the right approach and conversation. Team Prospr believes breaking the ice with the right question will make it much easier to feel the vibe.”

Highly educated singles flock to Prospr in hopes of upgrading their dating experiences.

While its competitors pursue fast-paced swiping tools, Prospr endeavors to slow things down and deliver world-class introductions based on deep, mutual compatibility.

“I think this is the best free dating app I’ve ever had,” said one Prospr user on Google Play. “I love most of their elite features, which did help me find more beautiful matches.”

Prospr’s target audience include well-spoken, well-educated, and well-traveled professionals who are serious about getting into a relationship. According to its internal statistics, 83% of its members hold a bachelor’s degree or higher, and 60% are in senior management positions at their jobs.

How does it achieve such impressive stats? By rigorously screening all new applicants.

When you create a profile on Prospr, you’re not guaranteed access to the dating app. The team has to first verify your profile and give you its seal of approval. The team only accepts individuals who meet the standards of its exclusive community.

Prospr profiles must be genuine and have a clear photo on display, but the team also looks for lifestyle factors, including occupation, education, and employer, to determine that person’s compatibility will with a dating app designed for high-earning professionals. In the end, only a fraction of Prospr applicants — the top-tier of the dating world — will make the cut.

“Less than 20% of all daily applicants meet the requirements to get access,” Niels said. “These users together with Prospr’s early invitees are all vetted from its staff, to build the best pool of high-quality users to match with.”

All members on Prospr have been handpicked, and that means daters on the platform don’t have to do nearly as much screening and filtering. Everyone already meets a certain standard, and that makes the dating pool a more desirable and satisfying place.

Prospr encourages its users to verify their identities through Facebook and verify their occupations through LinkedIn — thus adding a level of trust to the profile. The app can also conduct AI Face Verification and put a badge on the dating profile to indicate that person is the real deal. Prospr does not tolerate catfishing, and it does not skimp on quality when it comes to its membership base.

Live Long & Prospr on an App Like No Other

Since its launch, Prospr has set itself apart from other dating sites and apps by catering to elite singles who have a lot going for them — except in the romance department. The team has engineered solutions to authenticate profiles, stimulate deep conversations, and spark valuable connections online.

At the end of the day, Prospr’s success stems from its founding philosophy to put highly selective tools into the hands of selective daters.

Many users, including Jimmies from Montana, have enjoyed Prospr’s concierge dating service and used its matchmaking features to meet worthwhile date prospects around the world. If you’re looking for a real relationship, you can start your search on this dating app.

“Users can get access to the exclusive community by verifying their identity to build trust — something that is actively encouraged at Prospr,” Niels said. “This ensures all users are real and finding love can be stress-free.”