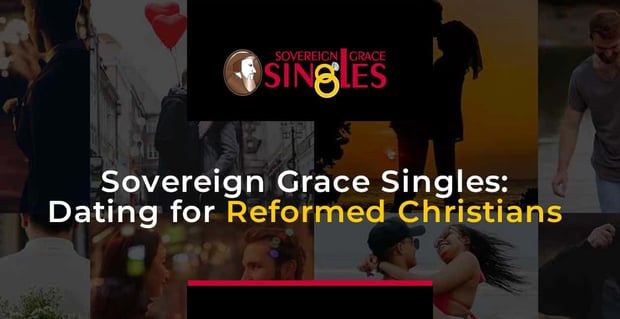 The Short Version: Since 2004, Sovereign Grace Singles has maintained a dedicated community for Reformed Christian singles seeking a soul mate. This niche dating site may be small, but it can offer true believers a meaningful opportunity to meet people who share the same religious beliefs and family values. All members of Sovereign Grace Singles must agree to a doctrinal statement to verify that they follow the Scripture and want a marriage sanctioned by God.

Sovereign Grace Singles (or SGS) began in 2004 with one man with a vision. Dean Scott wanted to create a website that would support and connect Calvinists like himself in the online dating scene.

Dean is a retired firefighter and paramedic. He doesn’t have a tech background, but he understands the Reformed Christian community and is passionate about creating a resource dedicated to helping Calvinists find happiness and prosperity.

Since the dating site launched, Sovereign Grace Singles has been a blessing in the lives of countless singles around the world. It has sparked conversations, inspired relationships, and even led to Christian marriages.

Sovereign Grace Singles is an independently owned niche dating website that serves single Reformed men and women seeking partners who share similar values, beliefs, and goals. Over the years, SGS has been praised by pastors and Christian leaders who see the value in this endeavor to unite people of faith.

Dean has a deep understanding of how impactful Sovereign Grace Singles can be because he has used it to transform his own life and expand his family. He and his wife met through the SGS community, and her youngest son Steven also found love and got married thanks to the dating website.

“It’s a cool legacy to leave behind me,” Dean told us in an interview. “I’d love to be able to hand it over to them and their four kids one day.”

The online dating scene is full of niche dating sites, but too many of them are essentially copy-and-pasted versions of mainstream dating sites. They offer the same profile and matching features and throw in a few keywords to appeal to the target audience.

That’s not the case on Sovereign Grace Singles. This is an independently owned dating service created by a Reformed Christian on behalf of Reformed Christians, and it has many unique features that recognize the importance of faith and family in this niche dating world.

When new members join Sovereign Grace Singles, they must agree to the Doctrinal Statement, which defines the faith-driven values of the community. Dean reads through each profile to ensure every new member is in alignment with the SGS mission.

SGS profiles contain a lot of detailed information that’s helpful for identifying long-term compatibility. The profile includes fun questions like “How do you enjoy your leisure time?” as well as serious questions like “What contributed to your previous relationship/marriage ending?”

By showing people as they are, an SGS dating profile can provide a starting point for good conversations and real relationships.

The SGS site features faith-related search tools and discussion forums to help singles follow their hearts and find connections based on common interests. It’s free to browse the dating site, but members must upgrade to a paid subscription to send private messages or group posts.

The SGS community connects members who are genuinely seeking love and marriage.

Dean said SGS has not changed its prices since 2005, and he’s less interested in making money and more interested in helping serious daters find one another. He and his webmaster Johnny have created an uplifting place to meet someone special.

“The value of my website is that it is the real deal,” Dean said. “I’m passionate about creating a website where God is glorified and people find each other for good wholesome Biblical Christian reasons.”

Over the last few months, the Sovereign Grace Singles team has been working hard to give the dating website an upgrade and streamline the online dating process. Dean joked that he’s no Mark Zuckerberg, so community members may encounter some glitches as they roll out new user-friendly features and a more modern interface.

On a Heartfelt Mission to Create Loving Christian Marriages

Sovereign Grace Singles has received many heartwarming testimonials over the years, and Dean can personally attest to the dozens of marriages that have taken place as a result — because so many of them can be found in his own extended family.

Of course, Dean and his wife met on SGS, and their relationship led to many other matches in the Reformed Christian community. Dean’s wife was a widow with four grown children, the youngest of whom joined SGS, fell in love, and married a woman named Sarah.

Sarah has five siblings, and three of them got married to someone they met on Sovereign Grace Singles.

Dozens of Christian marriages can be traced back to the SGS network.

“Along with proper supervision in a true courtship, this can be a very useful tool for people to meet Christian mates,” said Sarah’s father Pastor John Ashwood. “Sovereign Grace Singles is a far superior method to the modern dating system.”

To Dean’s knowledge, the first wedding inspired by Sovereign Grace Singles occurred in January 2005, and he said it remains one of his favorite success stories to come from the website.

Anu and Andrej reached out via email to tell Dean about their love story and invite him to their wedding in Germany. At first, Dean regretfully told the couple he couldn’t afford to take such a trip last minute. However, Andrej graciously offered to pay for the travel expenses as a thank you for introducing him to his bride.

Dean spent a week getting to know the couple and their family members, and it was a wonderful example of the love that can come from Sovereign Grace Singles. Fifteen years later, Anu and Andrej are still married and have three children.

“It’s so amazing to see the family growth, the children born, and the legacies created,” Dean told us. “I cry all the time, and I thank the Lord for allowing me to be a tool through which Biblical marriages can be realized.”

When Dean established Sovereign Grace Singles, he didn’t have any experience as a web developer or tech entrepreneur, but he had faith that hard work and good intentions would lead his budding dating site to success. Now he has the SGS community to thank for his own marriage, his stepson’s marriage, and countless other loving relationships in the Reformed Christian community.

Sovereign Grace Singles has distinguished itself as a faithful and moral dating service that focuses on quality over quantity and gives Christians the chance to get serious and create meaningful connections in the dating scene.

“It’s not just about romance,” Dean said. “It’s about fellowship — Sovereign Grace Singles can connect with someone when you’re feeling lonely.”