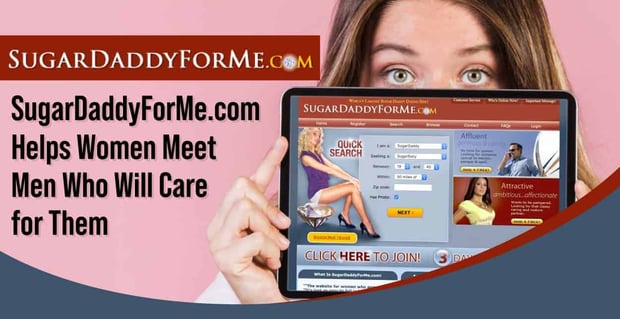 SugarDaddyForMe.com Helps Women Meet Men Who Will Care for Them

The Short Version: In the early days of online dating sites, it was still difficult for sugar daddies and sugar babies to meet. That’s why SugarDaddyForMe.com was launched in 2004 to help sugar daters find each other and bring their relationships into the real world. As one of the first online platforms that matched sugar daddies and sugar babies, the site soon attracted a long list of satisfied clients. Now, more than 15 years later, SugarDaddyForMe remains a popular site and app for those seeking sugar relationships, and the team is developing new functionalities that keep users safe.

Over the years, SugarDaddyForMe.com has helped people find companionship, and it all started with Founder Gautam Sharma. Gautam created the site because he was struggling to find the kind of dates he desired.

Recently divorced, Gautam wanted to date women who appreciated him paying for their dinners and opening their doors. However, many of the women he met weren’t looking for that kind of relationship.

“It was harder and harder to meet girls who wanted a man to take care of them,” he said.

SugarDaddyForMe.com focuses on connecting sugar daddies — often wealthy, older men — with sugar babies, primarily younger women who want to be taken care of by their partners. According to Business Insider, the average sugar daddy is 38 and earns around $250,000 annually, while the typical sugar baby is 25 and receives $2,800 each month from her daddy.

SugarDaddyForMe’s users don’t stick strictly to those types of arrangements, though many prefer to be upfront about any monetary expectations. Most of the men on the site are older, wealthy, accomplished, and seeking a woman to “mentor, pamper, and spoil,” according to the site. Meanwhile, the women often seek a “classy, caring, and mature partner.”

SugarDaddyForMe has gotten a lot of good feedback from satisfied users. As one woman noted in her online testimonial: “I have had the best experience and the fastest results ever. I tried three other dating websites and never had any good experiences at all. I have met with two successful men already, and I’ve only been on here for a month. I would recommend this site to any girl seeking a wealthy, older man.”

Gautam founded SugarDaddyForMe.com to help him meet like-minded women, and his effort paid off even better than he could have imagined. That’s because he met his wife on the site, and they’ve now been married for 12 years.

The platform also swiftly found a worldwide following of users who were looking for companionship.

“The spirit behind the effort was to help women meet men who genuinely enjoy caring for them. We also give men the opportunity to meet women who desire that arrangement. The site grew from there,” he said.

The platform appeals to financially stable men who are looking to pamper younger women.

SugarDaddyForMe.com attracts men and women in different demographics who are looking for sugar relationships. Men on the platform typically range in age from 35 to 75. Women are generally in the 25 to 40 age range, though the site does occasionally attract women as young as 18 or as old as 60.

Not all of the men on the platform are millionaires, either. They may just enjoy pampering a woman.

“They come from all walks of life, and include people who make modest salaries but still want to take care of their women,” Gautam said.

As the site grew its user base, Gautam expanded his team, as well. When it launched in 2004, Gautam operated the site by himself, but over time, he added a development team and customer service department.

Those additions have made the platform even easier to use, from sign-up to finding companionship.

SugarDaddyForMe.com offers an intuitive interface that allows users to quickly set up a profile with a description of themselves and what they’re looking for. They can also identify themselves with photos and include their age, race, and gender.

Then they can start searching for connections. They can narrow down their options by age, location, body features, or many other characteristics.

When profiles come up after a search, Gautam suggests that users “decide if they like what they see and go from there. We don’t have fancy algorithms, so it’s like a typical search.”

For users who want to test the waters before jumping in, they can try out the website for free for three days.

Though the platform is search-based, Gautam said that it is highly effective because of the number of new users it attracts — more than 2,000 per day.

“Our platform works. If you sign up on the site, you can have a date within the next 24 hours,” Gautam told us.

Over the years, he’s seen just how effective SugarDaddyForMe is in pairing sugar daters. That’s because instead of bells and whistles, it provides users with a more natural way to find the relationships they seek. And now, more sugar daters know where they can find others interested in the same things.

“At the end of the day, you read the testimonials and see the positive effect you have on people’s lives,” Gautam said. “I think it’s wonderful. We definitely help society become much happier — I firmly believe that.”

Though SugarDaddyForMe.com has been helping users for more than 15 years, Gautam started noticing some recent trends in the sugar relationship space that needed his attention. For instance, he’d heard a few stories about sugar daddies stalking women, making not only those women but others feel less than safe online.

“We decided it was time to protect the privacy of women and make them feel safer here,” he said.

So, in 2020, the site’s updates emphasize privacy and security.

The first is a new messaging feature. When one user sends a message to another, it will be delivered anonymously. That way, no user will have access to another’s phone number until they want to provide it.

Another benefit of this system is that online correspondence is converted into text messages.

“Email is so archaic. You send an email to someone and hope they will get it in time — if they get it at all. If you text someone, you can be sure they’ll receive it instantly,” Gautam said.

“Privacy is going to be on a whole new level,” Gautam said.

That means connections won’t be limited because a woman feels unsure about her safety on the platform.

“If you think you have that connection with someone, you won’t have to worry about missing that because of security concerns,” Gautam said.