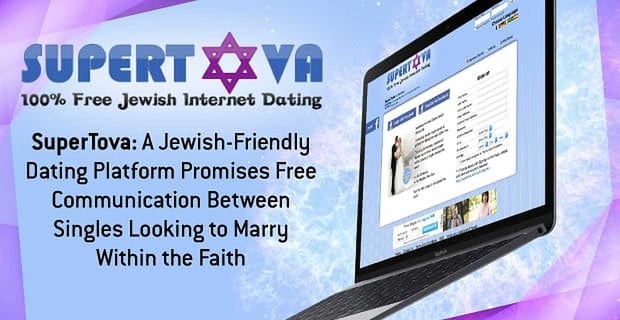 SuperTova: A Jewish-Friendly Dating Platform Promises Free Communication Between Singles Looking to Marry Within the Faith

The Short Version: Founded by a Jewish single for Jewish singles, SuperTova is an authentic, trustworthy, and free niche dating site. Justin Corsa built and maintains the website as a side project because he wants to help Jewish people date and marry one another, and thus preserve the Jewish culture for future generations. SuperTova’s mission is to unite the Jewish dating population worldwide. Currently, more than 30,000 active members use the dating platform to browse, flirt, and chat with men and women of similar cultural backgrounds. Whether you’re a practicing orthodox Jew, a reformist, a conservative, or just plain Jewish, you can sign up to SuperTova to find your bashert in a welcoming and diverse online community.

When New Yorker Justin Corsa moved to Wake Forest, North Carolina, for his job, his dating life took a hit. In the past, he’d had a good experience as a member of predominantly Jewish dating site; however, once he moved to a smaller dating pool, all that changed.

“After moving here, I got back on the site, in the hopes of meeting someone Jewish,” he said. He’d taken a look at the dating site’s membership base in North Carolina and thought there were many active members near him. When he subscribed, though, it soon became clear the actual number of singles online was significantly less than it had appeared. “There were many profiles in my area. However, these profiles were either inactive or spam profiles,” he told us. “Basically, I was deceived.”

In areas where there’s a large Jewish population, a niche dating site (like the one Justin tried) can provide a suitable dating environment with lots of options. But in smaller cities, the singles network falls short and so may try to entice users with fake or inactive profiles. It’s a classic bait-and-switch. After finding most members to be unresponsive, Justin canceled his subscription but couldn’t get his money back for the month.

“At this point,” he said, “I realized it would be better to simply offer the Jewish people a platform to come and go, at any time, without having to pay a fee. The only way to get what I want, I thought, was simply to do it myself.”

In his spare time, Justin created a free Jewish dating site and named it SuperTova after the Hebrew word for good deed. Today, the website offers thousands of Jewish singles the opportunity to meet, match, and marry without paying any subscription fees. It’s a legitimate and trustworthy space intended to uphold Jewish values and cultural integrity for daters around the world.

Justin is a mensch working to solve a common dating frustration by building a popular, free, and transparent dating platform for the Jewish people. He applies his marketing, finance, and management experience to grow SuperTova’s community as a passion project on the side of his full-time career. He and his server administrator run the site largely on their own. They invest their time and finances in SuperTova because they believe, fundamentally, in keeping Jewish traditions and culture alive through marriages within the Jewish faith.

“I feel strongly that having dating platforms, such as SuperTova, is just another means to help Jews keep their culture intact,” he said, “and it aids in the future growth of our people.”

SuperTova prioritizes authenticity and community-building to make the dating site successful. The Jewish singles platform cultivates an active membership base made up of real people looking for a genuine relationship. Spam activity is not tolerated, and inauthentic users are removed to keep the level of discourse polite and welcoming for Jewish daters.

In the signup process, SuperTova emphasizes quality over quantity. Completing a profile requires filling out quite a few sections on your appearance, occupation, religious views, hobbies, and other background information. Each profile is checked by Justin or a volunteer to ensure no spammers or suspicious people join the site. “I genuinely care about the well-being of my members,” Justin told us. “I had an authentication process built into the registration platform, and I continually monitor the site.”

Altogether, SuperTova has a database of more than 50,000 members, but Justin chooses to highlight the 30,000 active users who have completed their profiles and subscribed to the mailing list. Those singles are so engaged on the site, presumably, because they are serious about dating within the Jewish faith.

Justin personally examines a majority of SuperTova’s new members to ensure every profile is real.

SuperTova maintains a widespread and diverse Jewish community, with members in every state of the US and dozens of countries all over the world, including Canada, Israel, Argentina, Russia, Mexico, and China. “I was surprised to see many Jews from South America join,” Justin commented. “I love to see the diversity with respect to location on here.”

You don’t even have to be Jewish to join the dating network — as long as you’re willing to convert. “If someone who is not Jewish wants to join SuperTova, and is interested in becoming Jewish, then it’s perfectly acceptable to bring them in,” he said. “I would never deter someone. For me, personally, I think it’s a beautiful culture, and, if someone wants to be part of it, my door is wide open.”

The site is intended for spreading the faith, primarily through raising a Jewish family, so anyone seeking to convert members away from Judaism is not welcome on the SuperTova. The Jewish singles here are true to themselves and know what they want. As Justin said, “Our ancestors fought so hard to preserve our culture, our history, and our laws through hard work and suffering. I look back at that, and I want to preserve it, too.”

In some ways, SuperTova draws inspiration from social media in how it ties people together. The SuperTova Wall acts like a newsfeed where every member is already a friend. “Rather than having your own personal wall, everyone shares the Tova Wall,” Justin explained. “There’s a lot of activity and a lot of posts being generated on this wall. It’s a way to bring the entire SuperTova community together.”

Many people post comments and make suggestions in this open forum. It gives singles a low-pressure way to engage with one another in a public and friendly space. The newsfeed links Jewish singles all over the world by giving them a way to share their thoughts and experiences with the SuperTova community.

If you want to start a conversation on SuperTova, you can visit the forum, enter the chat room, or send an instant message.

On SuperTova, users have multiple ways to connect and build a relationship online. Plus, advanced search filters help narrow down the search for a person in the same area or someone willing to relocate. As you select your partner’s preferred physical or personal attributes, the search results will automatically show local matches and profiles of people willing to relocate for the right person.

“I love that feature,” Justin said, “because I’ve always been big on the idea of having a broad-spectrum approach when it comes to relocating for the right person.” Justin hopes his site’s connective features help members overcome the distance between them and make lasting bonds so they can further the Jewish legacy.

SuperTova unites the Jewish community in a global dating network. Many users found someone special living in another city, state, or even country and then got married. According to Justin, long-distance relationships can be worth the added effort because they open singles up to more dating possibilities and experiences. He encourages members not to restrict themselves to only dating people within a 25-mile radius. That strategy helped Edmundo, who lives in Mexico, find his future wife, Beth, who is from South Africa.

“Meeting Edmundo felt like meeting someone I’d known forever,” wrote Beth in a testimonial. In 2013, at the departure gate at JFK airport, Edmundo asked his long-distance love to be his bride.

This isn’t the only love story begun on SuperTova. “I am so lucky to have found him,” said Suzie, a SuperTova member from Pittsburgh, “and can’t wait to start our life together and be in the same city for more than five days at a time!” She met her future husband on the dating site, and he soon relocated from New Jersey to be with her. They got engaged in 2010 and married in 2011.

“I am from Denmark and my husband lives in New York. I flew across the Atlantic a couple of times, and now I live here, too,” wrote Hannah in a testimonial. “We knew right from the very first minute that we had met our basher/basheret. No doubt whatsoever.”

The many success stories inspire Justin to keep working to grow his site’s membership and improve the user’s experience as best he can. He takes the mission of the site very seriously and wants to do right by the Jewish singles who come to SuperTova looking for love. “So many people, just like Edmundo and Beth, found each other on SuperTova, despite living in different countries, and developed an online relationship,” Justin said. “This happens very often, and it works.

“It’s a sense of euphoria, at times, knowing that my hard work has helped hundreds of people find their true love and get married,” he said. “I know that my efforts have enabled the possibility for growth and children for the future, and that’s something I’m very proud of.”

After getting fed up with disingenuous dating websites, Justin decided to build something better. Today, SuperTova is a popular and authentic dating platform for Jewish singles to meet one another. No matter where you live, you can sign up and connect with an active community of over 30,000 Jews.

SuperTova has exploded in popularity because of the site’s values-centric approach and straightforward social tools. In the coming years, Justin said his focus is on continuing to grow the site’s membership base by spreading the word about his free dating network to single Jews everywhere.

“Thank you, Justin, for all your hard work and time in creating and maintaining the sites and for giving people like us the chance to find our basherts!” — Rob and Rachel, a married couple who met on SuperTova

Justin feels so passionately about keeping the Jewish culture alive that he labors on SuperTova on weekends and in his off hours just to do a good deed. He understands the struggles Jewish singles can face online and wants to decrease the frustration and cost of finding a committed partner with the same cultural values and background.

“My vision is to continue the growth trend to the point where all Jews know it exists,” he said, “and, hopefully, it becomes the go-to platform for dating. It’s now worldwide, but I’m still not satisfied. I feel that we need substantial growth, and I really, really hope we get there.”