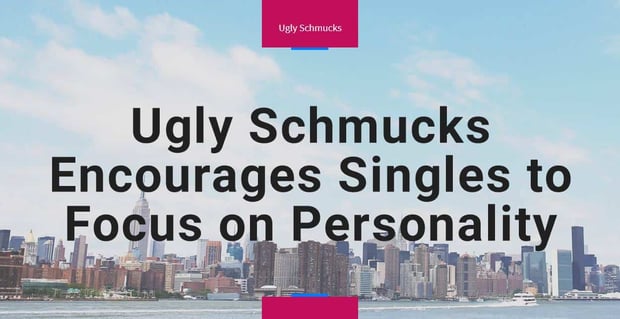 Ugly Schmucks: A Dating Site That Encourages Singles to Focus on Personality Over Looks

The Short Version: Many dating sites value attractiveness over every other quality a person possesses. So singles may overlook the most interesting or compassionate people on those platforms. The Ugly Schmucks dating platform seeks to help singles overcome that obsession with good looks. Users who lack beauty confidence join the site to meet others who may struggle with self-esteem. Singles connect with online daters who may not fit conventional beauty standards.

Many online daters don’t feel confident about their looks. A study from the journal Frontiers in Psychology discovered how little time users spent on the dating app Hinge before deciding whether someone was attractive enough to swipe right. The study explored the preferences of 100,000 heterosexual users.

The study found that women participating in the research spent very little time analyzing a man’s attractiveness before swiping right on him — only 3.19 seconds on average. They spent a little more time — 6.91 seconds — on less-appealing candidates and appeared to hesitate briefly before swiping left.

Many dating apps emphasize looks, and singles may not read much information about another user before deciding to swipe right or left.

Where does this leave singles who don’t find themselves particularly attractive? Where can they turn if they feel like they have more to offer in the personality department?

The answer is the Ugly Schmucks dating platform.

“Our Ugly Dating is geared towards people who may feel unattractive or uncomfortable in their own skin and is designed to help them succeed in meeting others who value genuine personality over outer appearance,” according to the platform.

Website developer Joe launched Ugly Schmucks in 2010 after graduating from college. He came across a dating website catering only to beautiful people and wanted to create the opposite.

“That’s where I got the idea for a niche dating website for only ugly people. It was created as a tongue-in-cheek social experiment. It was released and, to my surprise, quickly gained adoption,” he told us.

Helping Singles Look Beyond the Superficial

The website has more than 60,000 members — and growing — with most users in North America.

Some users say they appreciate the website because it counters the notion that singles must hold out hope for a match. Not only do those individuals worry about finding mates, but they also see negative depictions of themselves on TV and in movies.

“All around us, we see gorgeous people, on television, in movies and magazines. We see ugly people too, but they’re not the main actors. They’re the dishwashers, the janitors, or the bad guys! The whole perception of ugly people is that they are of lower stature than everyone else. I find this perception amazingly ugly,” reads a post on Ugly Schmucks.

The Ugly Schmucks online community also provides users with low beauty esteem a place to connect. Some forum topics include, “Why is Online Dating so Difficult for Average looking people?” and “Are there any other online communities recommended for a lonely Schmuck?”

One user suggests why it has been difficult for so-called unattractive people to use traditional dating platforms:

“The photo acts like a ‘gatekeeper.’ I just got onto some apps, and am stunned that the profiles just don’t seem to matter anymore. The ones where people write long answers on their profiles are more interesting, and I’ve found a bunch of interesting people who I don’t find physically stunning, or even ‘not my type at all,’ and I really want to meet up with them and have a conversation,” they wrote.

Users also discuss why they may feel unattractive and offer support and advice for connecting with others who may feel similarly.

Trends Show That Appearance Isn’t Everything to Daters

Ugly Schmucks appeals to users because it doesn’t force them to grapple with traditional dating site expectations. Specifically, most dating platforms market themselves with pictures of the attractive singles available to date.

“Dating websites, at their core, are very superficial. Your profile is being judged primarily on your profile photo. This is great for people who are super attractive, but what about everyone else? So many people are unsuccessful in online dating because there is a high expectation of beauty. The expectation at Ugly Schmucks is that most people will be ugly,” Joe told us.

Dating sites may be moving away from this obsession with looks. The pandemic encouraged singles to focus less on the attractiveness of potential partners and place more emphasis on other qualities.

For the past 11 years, Match Group’s Singles in America study has surveyed more than 5,000 singles of all ages across the United States. In 2021, singles reported being more interested in the stability and security of potential partners than their looks alone.

According to the study, 90% of singles reported caring about good looks in 2020, while only 78% ranked that as an important quality in 2021.

Other important factors were open-mindedness, emotional maturity, and communication skills.

“I do think this is a historic time in human courtship. I’m not surprised that those that came out of it alive grew up. The bad boy and bad girl are out — people are going to be having fewer one-night stands,” said Helen Fisher, Chief Science Advisor for Match.

In that regard, Ugly Schmucks users are ahead of the curve.

Ugly Schmucks connects singles who may not feel attractive enough for other dating sites. They appreciate the platform because it doesn’t emphasize good looks as the primary reason to show interest in others.

Some users also feel they have been overlooked in many areas of life and value community support.

“We are ignored in traditional online dating communities, passed over in job interviews, disrespected in the media and Hollywood. This is a community where like-minded uglies can come together on an equal playing field, without feeling visually inferior,” Joe said.

Ugly Schmucks community members can also work to build their confidence. For instance, if they can meet a romantic partner or friend who values them for qualities other than their looks, that validation can go a long way.

Vivian Diller, Ph.D., suggests that singles who struggle with beauty confidence can emphasize the physical features they find most attractive about themselves.

“If you have curly hair, bring attention to it by wearing cool hats. If you have nice eyes, wear clothes or makeup that brings out the color. Healthy teeth? Keep taking care of them and use your smile to feel good about your looks. If you alter the equation between perfection and beauty to a more realistic definition, the chances are you will be able to enhance your beauty self-esteem,” she said.

The Ugly Schmucks team have plans for further developing the site. In addition to the recently opened community forums, singles can also meet others on the new Android app. Users will soon be able to download the iOS app, instant message singles who appeal to them, and pay for extra features using crypto or bitcoin payments.

If singles feel their looks hold them back in dating, they should consider developing connections with others on Ugly Schmucks.

“Ugly Schmucks is for people who value genuine personality over outer appearance. This community is dedicated to the real rejects of society. The visually boring, unappealing, disturbing, or just average,” Joe told us.