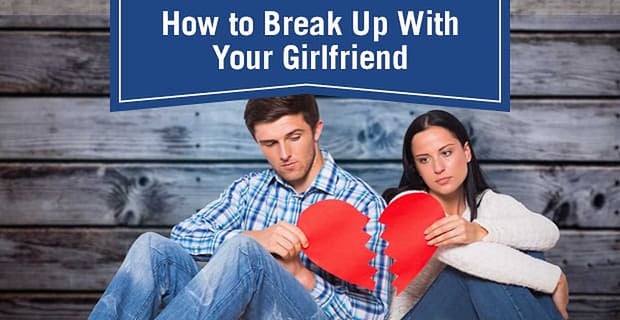 Breakups can be difficult — there’s just no getting around it sometimes. Most people don’t want to get dumped or do the dumping, but it can be necessary when the relationship has run its course. As Taylor Swift says: “So it’s gonna be forever/Or it’s gonna go down in flames.”

No one has really mastered the best way to break up with someone — we could all probably make improvements. Today, we’re presenting you with eight tips to make the situation easier, and each tip is backed by research.

1. Be Honest, Open, and Direct

There’s a reason people say “Honesty is the best policy.” It just is. Especially in a breakup. According to Psychology Today, honesty is the best way to achieve “minimal hurt, pain, and drama” when ending a relationship. It may not be easy to look someone in the eye and say that uncomfortable truth, but it’s better in the long-run.

Being honest can feel painful and uncomfortable in the moment, but it’s much kinder long-term.

Show respect for that person by being honest and open about your reasons and offering direct feedback. Of course, you don’t have to go overboard and sound vicious or blunt. Keep it classy.

Sometimes in a bad breakup, it’s tempting to fall into personal attacks. Even if the other person is being nasty, don’t engage and make it a fight. This is how people end up burning each other’s possessions, so don’t go that route.

Since you were a couple, you probably enjoyed something about each other at some point. Focus on that. Remember the good times, the treasured memories, the things you learned about yourself or about relationships, and don’t let current unpleasantness taint it. Remain positive.

Try making a compliment sandwich. First say something nice, next slip in your concern, and then end with something positive. It works like this: “Amy, I have really enjoyed these last six months getting to know you. But right now, I feel that I need to go in a different direction. You are an awesome person, and I wish nothing but the best for you.”

3. Stay on Target and Be Firm

Sure, some relationships end mutually, but most don’t. Your girlfriend is probably going to be a little blindsided by the breakup.

Surprises can make the mind jump around erratically. She may resist the breakup at first by bringing up old memories or trying to dissuade you with physical contact or emotional arguments. Stay on track and do what you came to do.

4. Practice and Rehearse What You’re Going to Say

The more prepared you are, the smoother the breakup will go. This advice works for all ages. TeensHealth advises young romantics to think through their decision to break up and feel clear about why it’s necessary before acting.

When you go to break up with someone, be ready to explain your reasons and answer her questions.

You’re breaking up for a reason, so make sure you communicate that. Hit your bullet points without taking overly long: “Danielle, we have been fighting too much, and it’s not healthy. I think we need to break up. I’ve thought a lot about it, and I’m not interested in working on it — I just want to move on.”

Say it out loud to yourself beforehand. Get your mouth used to physically saying the words. Try to also think about what their reactions/arguments will be and prepare answers for them.

5. Leave Them Better Than You Found Them

This will be difficult. There’s no denying that. However, if the other person is open and agreeable, your supportive remarks could help them grow.

Breaking up isn’t a time to wound; it’s a time to heal.

During a breakup, Psychology Today emphasizes meeting that person’s needs as well as your own, so that the whole experience is mutually beneficial.

Everything we do or say or see in life adds to who we are as a human being. Let breaking up be an opportunity to learn and reflect. If you can manage to end a relationship on a positive note, those memories will forever be happy ones.

A scorched-earth approach might feel gratifying in the moment, but you’ll regret it later and always associate negative feelings with your relationship. No one wants that. Instead, choose personal growth by helping your ex see that splitting up is a good thing for both of you.

6. Don’t Ghost Her (a.k.a. Disappear Without Saying Anything)

You may be tempted to go out in a blaze of glory or simply pull an Irish Goodbye, but not only can these leave long-lasting emotional scars — they are often immature and sometimes downright mean. You’re better than that.

Men have an overall tougher time facing emotions. Whether its brain chemistry, how we’re raised, or simple inexperience, the fact is that some men’s instincts are to avoid emotion altogether. Like the plague.

So a common, easy, and admittedly terrible way that guys break up with girls is to “ghost them.” This means ceasing all communication, abruptly and permanently. You’re dating one day, you’re not speaking the next.

A survey of 120 women and 65 men found that both genders partake in ghosting habits.

This is done in hopes that the ghostee will just “get the hint” and leave the subject alone. It spares you from dealing with it by essentially shoving the burden on your ex. You’re leaving her with a ghost, a haunting mystery she doesn’t fully understand.

While it may seem easier (out of sight, out of mind!), studies have concluded that avoidance is a more hurtful and the least preferred breakup method. It increases anxiety, doesn’t give closure, and sucks overall. Don’t disappear on a girl. That’s the coward’s way out.

A lot of times, in order to avoid being the one to actually end a relationship, men provoke the woman into breaking up with them. Not only is this abjectly cruel, but it shows you to be weak and insecure. A recent study identified 7 ways people break up, and 6 of them are not very nice.

Even if you feel justified, take the high road and don’t be jerk. Take my word for it that purposely trying to hurt another human being will never end well. Years later, you’ll be stuck with the guilt and shame.

You can’t win a breakup. This is high-school thinking, and it’s wrong. You’re both losing a personal connection with someone you once cared about, so you should treat that with respect.

Manipulation and miscommunication are poor ways to break up because it only causes more hurt.

Don’t manipulate the situation or her feelings. Want an example? Don’t tell other people that you’re planning to break up with her, knowing that word will get back to her. It’s an immature way to deal with a breakup, and it’s likely to piss her off.

Also, don’t break up via text. Text breakups are insulting and disrespectful. Anything besides a private, in-person conversation is the wrong way to go. The point isn’t to humiliate her, punish her, avoid her, or even spare her feelings — the point is the break up with her. So do that as straightforwardly as you can.

Basically, the best answer to any issue in a relationship is upfront communication. Yes, honesty can sting, but lies and avoidance always cut deeper. People want closure, even if it isn’t what they were hoping to hear.

Don’t be a chump who continues to cause hurt by avoiding the issue. Confront the breakup head-on with poise and understanding. That way you both can move on. Everyone will heal faster and feel better about it.