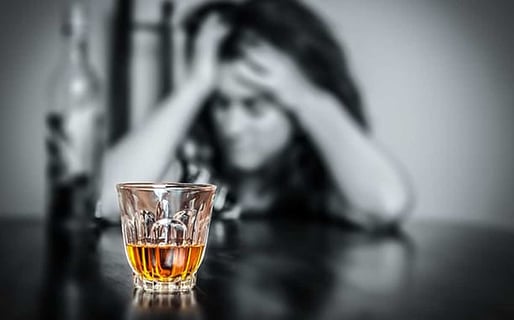 For women who are trapped in the limbo of sexuality, there may be a greater tendency to rely on destructive coping mechanisms to distract from negativity, a new study by the American Sociological Association suggests.

Thi study appears in the June issue of the Journal of Health and Social Behavior.

These women lack the clear connection between who they are attracted to and how they identify themselves, which creates a conflict because according to cognitive dissonance theory, humans like to be consistent in their beliefs, behaviors and attitudes. The difference they feel causes discomfort, and they turn to alcohol because of it.

The study, which appears in the June issue of the Journal of Health and Social Behavior, takes a deeper look into these non-heterosexual women and why they have higher rates of drinking.

“There’s a lot of research that shows people who are not heterosexual — that is, those who are bisexual, gay or lesbian — have higher levels of alcohol-use disorders, but it was not clear what explains that disparity aside from looking at the fact that they identify as non-heterosexual, which was not satisfying to me as a reason, per se,” said Amelia E. Talley, the leader of this study and assistant professor at Texas Tech University.

Talley said there are norms and expectations that go along with certain roles, whether they be internal or external, and failure to identify in a way that is expected might create a negative effect. This discomfort could lead to self-medicating with drugs or alcohol, thus propelling her study.

Disparity Between Identity and Behaviors Increases Alcohol Use

The study used data from a Chicago Health and Life Experience of Women (CHLEW) study, which followed a group of self-identified lesbians from 2000 to 2010, and it was evident that women tend to be more sexually fluid in terms of behaviors and attractions over time.

A woman may be attracted to women her whole life but one day be attracted to a man. Talley wanted to see if situations like this, where there’s room for discrepancies to manifest in sexuality, correlated with increased alcohol consumption.

After much exploration and research, evidence shows higher levels of discordance between sexual identity and attractions or behaviors may contribute to temporary increases in hazardous drinking. It’s not until the woman reports this disparity that the problematic alcohol use rises.

“When you acknowledge this type of discrepancy exists, it puts you at a subsequent greater risk for drinking,” Talley said. “It’s common for women to be sexually fluid, but there could be temporary risks associated with coping attempts to resolve shame or negative affect by engaging in distractive, maladaptive problematic alcohol use.”

Age is Not Just a Number

The results of this study were consistent for non-heterosexual women in terms of race, but age did make a difference. Evidence proves being older could make it more difficult to report or acknowledge the discrepancy between sexual identity and behavior.

As you age, there is a larger society to answer to. People see you in a different way, and you have to explain to family and friends any changes you are exploring within your sexual identity.

People see you in a different way, and you have to explain to family and friends any changes you are exploring within your sexual identity.

Younger women are given more wiggle room when it comes to this situation because they are still in the maturing, discovering stage of life but, “it’s difficult when you get older because of people’s expectations that you should have your sexual orientation figured out,” Talley said.

Future Exploration in the Behavior of Non-Heterosexual Women

In a plan to continue spending time on this study, Talley intends to examine in more depth how to capture and measure the sexual orientation self-concept. Right now the only way to measure it is through three factors: your sexual identity, who you are attracted to and who you engage in behaviors with.

She wants to improve on this form of measurement by exploring similar questions in other data sets with college-age women, in which she hopes to replicate the same results from this study in those samples.

“Ultimately I’m hoping to create a scale that gets at sexual orientation self-concept ambiguity, which measures people’s acknowledgement that various parts of their sexual orientation may not align,” Talley said. “The take-home point is that ambiguity appears to be what’s driving the higher rates of hazardous drinking.”

Inconsistencies develop when people rethink sexual self-concept, and the distress it causes can trigger unhealthy coping behaviors. Talley wants to understand what it is exactly about identifying as non-heterosexual that puts individuals at risk for these destructive tendencies.