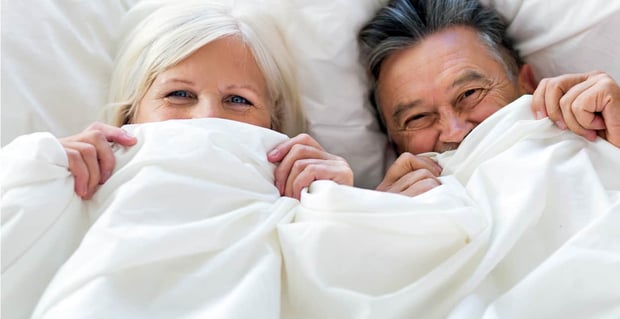 Looks like science has found another way to help stunt the aging process.

New research shows seniors who continue to be sexually active will appear younger than their actual age.

In research lasting more than a decade, Dr. David Weeks, a psychologist at the Royal Edinburgh Hospital in Scotland, surveyed several hundred adults and seniors for the study.

He found sexually-active seniors who had 50 percent more sex than the average for their age group appeared between five to seven years younger.

between five to seven years younger.”

According to Weeks, the sexual experience is a “crucial factor” in helping preserve youth. Endorphins released during sexual activity can act as a natural painkiller, improving sleep habits and easing anxiety.

Being sexually active, he points out, burns fat and boosts circulation, which promotes a healthier heart and overall circulation.

“The quality of sexual expression maintained in older adults is a predictor of good general health and well-being,” Weeks said.

He said the notion of seniors abandoning their sex life upon retirement is a misguided myth, one seniors should not fall into themselves.

“Sexual satisfaction is a major contributor to quality of life, ranking at least as high as spiritual or religious commitment and other morale factors, so more positive attitudes toward mature sex should be vigorously promoted,” Weeks said.

The Number of Seniors Having Sex is on the Rise