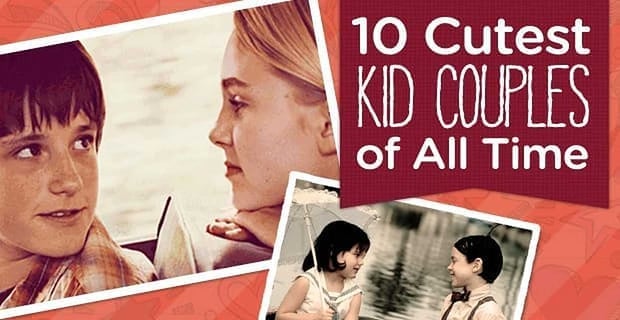 10 Cutest Kid Couples of All Time

Adults are known for screwing up relationships, but kids aren’t. That’s why it’s nice to relish innocent first love every once in awhile.

After scouring the Internet for the cutest of cute kid couples, we present you with this adorable compilation.

These cutie pies may have struggled a bit, but it’s obvious they’re meant to be. Alfalfa, a “womun hater”? Hardly. He can woo a woman like nobody’s business, winning the trophy and Darla’s heart at the end of the movie.

2. Holly Hills and Greg Heffley — “Diary of a Wimpy Kid”

The most popular girl (and fourth-prettiest) in the class and the unlikely protagonist — what’s not to love about a couple who beats the middle school odds? When everything else is going wrong, this relationship is just right.

An unlikely couple, they bonded over being a little bit different. They were the perfect complements, and there was no sweeter first kiss than the one these two shared. If only this first love hadn’t been so short-lived!

There’s no love at 13 like a love that begins in Paris. When American girl meets Parisian boy, the sparks naturally fly. No matter how young these two are, this is a love that warrants a kiss under the Bridge of Sighs.

Growing up is difficult, especially when those tricky emotions get in the way of things running smoothly. From second to eighth grade, these two can’t seem to get on the same page, but their final coming together is so worth it.

Anne knows you can fall in love for real, even at 10 years old. Her extreme efforts to win over Jørgen result in one of the cutest kid couples out there. The movie may be Norwegian, but the language of love is universal.

Another love that should’ve lasted much longer than it did, these two built their own world together, bringing out the best parts of one another. This king and queen reign supreme when it comes to sweetest relationships.

The best couple in this whole movie (which is saying something), Sam and Joanna prove they can do anything. Learn an instrument, pass airport security — it’s all done in the name of love. The kiss is what makes it all worthwhile.

Gabe and Rosemary may not have been destined to be together, but they made for one adorable couple while it happened. They serve as a nice reminder of the impact first love has on life — no matter how short-lived it may be.

Being a social outcast isn’t so bad when you’ve got another outcast with you. The devotion Joel shows to Wednesday might be a little insane, but who isn’t in this movie? These two are definitely meant to be together.