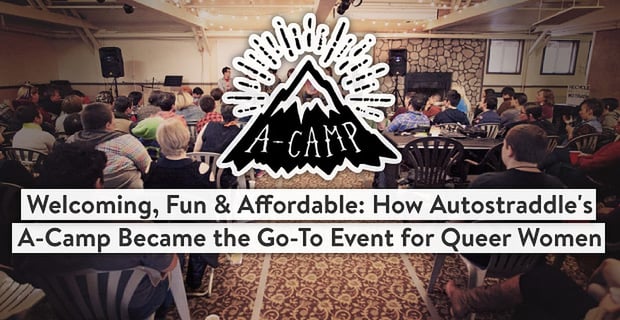 The Short Version: What started as a dream by Autostraddle.com to create a welcoming place for all lesbian, bisexual, transgender, and queer women to have enriching community activities has now become one of the most popular events of its kind: A-Camp. Held every year in the mountains of California, A-Camp brings together more than 300 women and non-binary folks (and a few trans men) to unplug from life’s distractions and “just be right here, be real queer.” For 5 days, they get to enjoy fun games, riveting group discussions and workshops, as well as killer queer performances — all at a fraction of the cost that you’d see for other events.

Looking at events for queer women today, there aren’t a lot of options that don’t center on drinking and partying (and spending thousands of dollars to do so).

And while these events are great for some queer folks, they aren’t exactly best for those who want a gathering within the community for learning, bonding, and different types of fun like arts and crafts, dance parties, and kickball matches.

That’s where A-Camp comes in.

A queer-normative space for women of all ages and backgrounds, A-Camp empowers, entertains, and celebrates the uniqueness of every woman there — without them having to empty their bank account for a lesbian cruise or weekend beach getaway.

Riese Bernard, Founder and CEO of Camp Ideas and CEO and Editor-in-Chief of Autostraddle, and Marni Kellison, A-Camp Director, were kind enough to tell us more about the awesomeness that is A-Camp, including details about the campers and activities and the importance of providing an affordable and valuable event like this for queer folks to simply “be right here, be real queer.”

Giving Queer Women An Alternative Way to Come Together

The idea for A-Camp came to Riese several years ago when she noticed lesbian, bisexual, transgender, and queer women didn’t have a solid place to get together, fully be themselves, and discover the great things all of these women have to offer the community. There were events like Dinah Shore, but nothing that didn’t heavily focus on drinking and partying.

From her own experiences at other events and in listening to Autostraddle users, Riese realized a lot of queer folks wanted more. She turned to her Autostraddle team to create an action plan that would incorporate everyone’s skills (writing, acting, singing, carpentry, activism, and more), and A-Camp was born.

Actor/comedian Brittani Nichols (left) in conversation with “Orange is the New Black” writer Lauren Morelli during one of A-Camp’s panels.

Marni added that providing a community for queer women to meet each other, share stories, and have new experiences is especially important for those in more isolated parts of the country and the world.

“They may be the only person like them in their community, so it gives them access to all of these people, and it’s fostered friendships and even relationships,” she said. “We found from doing our first few camps that the demand was huge and that people are interested in meeting each other in environments that aren’t just bars and clubs and parties and where they can meet people like them.”

A-Camp replicates that special summer camp feeling most of us had as kids, with the #1 goal always being inclusion and acceptance of one another, especially for campers who come without a friend or a partner. Once they get there, everyone realizes A-Camp is a home-away-from-home.

The Autostraddle Speakeasy is a group that formed at A-Camp as a way of providing a safe, closed space for queer people of color, and it has continued to thrive offsite and online.

“We’ve had a huge growth in the number of trans women coming, and we are actively trying to include trans women, gender-queer, gender-fluid, otherwise identified-type people,” Marni said. “We get an overwhelming response from people saying that the camp is an inclusive and welcoming place. We’re very body positive and accommodating in every way that we can be. People come and they can feel like they can be themselves.”

A-Camp Attracts Hundreds with Affordability, a Variety of Activities, and a Welcoming Spirit

From the price to the activities to the diverse attendees to the atmosphere, every detail of A-Camp helps campers forget about their worries and focus on learning, relating to one another, laughing, and living life to the fullest.

5 Days of Fun and Bonding for Thousands of Dollars Less

Whether it’s the location, the cabins, the food, or anything in between, affordability is a huge priority to the A-Camp team. In 2015, A-Camp was $595 for five days of entertainment, panels, classes, workshops, lodging, and meals. A-Camp also has an annual Campership option funded by the Autostraddle community that sponsors the trip for five to eight campers, as well as partial sponsorships for 10 campers that give them a 25-75% discount.

To compare, every other queer women’s festival, camp, or cruise charges hundreds and even thousands more than what A-Camp charges (about $750 for a festival, $1,400 for Unique Camp, a camping/networking event for young professionals of all genders and orientations, and $5,200 for a 5-day cruise). Most events don’t even include those amenities and experiences in their prices. While prices for spring 2016 haven’t been released yet, you can be assured it will remain affordable — no matter your income.

“We fear increasing the A-Camp tuition too much would hurt the A-Camp experience by edging out lower-income campers, many of whom fall into the demographic groups we most need represented at camp,” according to the website.

Dance, Poetry, Trivia & More: Dozens of Activities Offer Something for Everyone

A-Camp is where you can leave the rest of the world behind and simply do you.

Daytime events include unique classes like Ballet for Basic Bitches, informational sessions like “Lez Talk About Sex(ual Health),” discussion panels about issues within the LGBTQ community, or workshops held by special guests like Dannielle Owens-Reid and Kristin Russo, co-founders of the LGBTQ youth organization Everyone is Gay. Evening events include performances by special musical and comedy guests, followed by dance parties for those who are so inclined.

The talent of the Autostraddle team and special guests plays a big role in what the camp sessions will be each year, and they’re always trying to incorporate more master and specialty classes with people who have experience in their industry, whether that be comedy, lip-synching, songwriting, or anything else.

“We try to have something for everyone that touches on traditional camp as well as conferences and politics and pop culture and fun,” Marni said. “It’s a bit of a mix of DIY and programming that’s generated from the community for the community, things that our expertise drives. We’re doing that more and more as we go forward because we want more options for people who are interested in coming.”

Riese added that often the most popular activities are off-the-wall ones like Spice Up Your Life, where you take part in a hot-sauce tasting while listening to Spice Girls, as well as inspirational ones like the Autostraddle QTPOC Speakeasy, which provides a safe space for queer people of color to discuss topics particular to them.

Every A-Camp is as different and dynamic as the women who attend. On average, there are 250 campers (not to mention the wait list that’s just as long), with at least 60% being newcomers, plus 50 members of staff and talent. Campers range in ages from 18 to 50 and come from all over the world, including Canada, Australia, and Europe.

Campers range in ages from 18 to 50 and come from all over the world.

In order to keep a finger on the pulse of these diverse campers, A-Camp sends out a comprehensive survey at the end of every camp, getting a snapshot of the types of people who attend and what they like and don’t like. That information is then used to improve the process.

“People give us overwhelmingly positive feedback around the experience they’ve had there. People have said it’s life changing,” Marni said. “People have moved out of state, they’ve moved to new cities, they’ve changed their lives around, they’ve come out to their communities, they’ve self-affirmed in their identities in ways that they didn’t feel before, they’ve gone home with newfound feelings of affirmation and validation and strength.”

Thanks to its inclusive community, diverse activities, and affordability, A-Camp has had a huge impact on the lives of so many lesbian, bisexual, queer, and transgender folks. And Riese, Marni, and the crew will continue working hard to bring A-Camp to as many people as possible and make the experience even more fulfilling for everyone.