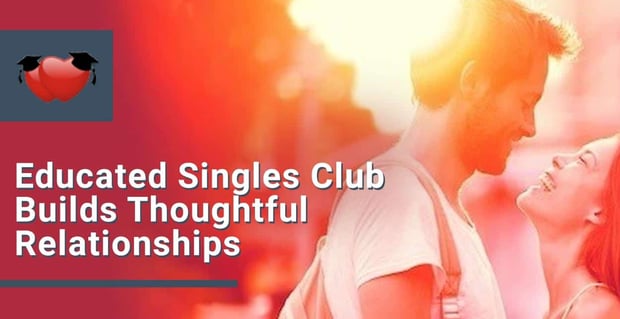 The Educated Singles Club: A Place for Singles Ready for Thoughtful Relationships

The Short Version: Highly educated singles with advanced degrees sometimes shy away from online dating sites and apps. That’s because the emphasis on physical beauty can make it challenging to find someone who is intellectually compatible. The Educated Singles Club set out to change that dynamic by providing a platform for those singles who prioritize intelligence. The platform is a great place to find dates, relationships, and friendships by bonding over mutual interests.

In 2000, around 10.5 million Americans had earned a master’s degree. Since then, the number has doubled. Today, 13.1% of Americans have earned an advanced professional degree — including a master’s or a Ph.D — according to the U.S. Census.

But that still doesn’t mean it’s easy for highly educated singles to find romantic partners — or new friends — who share their intellectual curiosity. Many dating apps and sites have fueled an interest in physical appearance and superficial charm over engaging personalities and in-depth conversations. As dating has become more casual, educated singles may face significant challenges when trying to find a date.

Dr. Majlergaard realized the difficulties intelligent singles faced when he himself started to search for love online. Every platform he signed up for seemed to ignore some of the most impressive parts of the person’s history and personality.

“It was very one-dimensional. My peers and I are very well-educated and can be attracted to people in other ways — intellectually, emotionally, and physically,” he said. “When they’re well-educated, singles often emphasize those traits rather than the actual physical appearance.”

In his quest to launch the Educated Singles Club, Dr. Majlergaard interviewed many singles to determine if his hypothesis was correct. He found many daters who were interested in meeting people with the same interest in knowledge.

The Platform Takes a Different Approach to Dating

Educated Singles Club is based on the traditional concept that people enjoy meeting others who share common interests and personality traits.

Singles can become friends with other members, who tend to be more mature than users on most other dating apps. The Educated Singles Club includes members in their 60s and 70s, and many have been married before. They have had interesting life experiences and realize there are more important aspects than how a person looks.

“That’s why they stay away from traditional sites, and they know how technology works. We have many gray gold members in the club: affluent, educated singles,” Dr. Majlergaard said.

The Educated Singles Club first connects people without pressuring those searching for a partner. Users can make new friends first in one of the platform’s many chat rooms where singles discuss subjects they find interesting.

“They can do it at their own pace and connect with people on many levels without having to worry about whether they have good looks or other things people look for on traditional sites,” he said. “There is no push or pressure because they can join the club for many different reasons.”

Dr. Majlergaard said that part of the reason many members aren’t desperate to find a partner is that studies show educated singles are often content with being single. They can wait until an emotional connection happens in an organic way, rather than just swiping because they think someone is physically attractive.

Educated Singles Club members care passionately about maintaining their privacy. That’s why the platform’s team confirms the identities of singles who sign up for a membership.

Dr. Majlergaard said he created the rigorous identity checks when he launched the club because he was concerned about scammers creating fake profiles.

“We were offered a whole lot of fake profiles to put on the site to make it look like we were bigger than we actually were. That just proved my point that we were onto something right, to have an honest and transparent business model,” he said.

When users join the Educated Singles Club, someone from the team checks their official ID to ensure the person has a well-established LinkedIn profile. The new member must also pay a fee — and there’s a reason for that, Dr. Majlergaard told us.

“When something is free to you, it means you’re the product. You pay with your information, knowledge, interests, and things you search for,” he said. “We wanted to turn it around. You are a member; you pay a membership fee. In return, we don’t share your information with anyone.”

The company doesn’t use Google Analytics and won’t sell information to third parties. Educated Singles Club even has another level of security. The team ensures that the name on the credit card used to pay for the membership is the same as the member’s name.

The Educated Singles Club Will Bring Back In-Person Events Soon

Dr. Majlergaard said that his team had organized in-person events in cities around the world before the COVID-19 pandemic. It was an efficient way to bring highly educated singles together. Attendees would come for more than just the chance to meet other singles. They would come to learn about something that sparked their interest, such as art or literature.

“People were participating in the conference because they were interested in the topic, but they knew everyone else was single in that room,” he said. “The reception afterward was a great thing because they could use whatever they learned as an icebreaker.”

Until the live events return, members can use the technology built into the platform to connect with other educated singles. Singles can message each other and even watch videos to learn more about various subjects. One of the platform’s most popular features is its online forum, which includes many interesting topics.

“They can connect based on interest from Australia to California. That can be the beginning of a relationship,” Dr. Majlergaard said.

Educated Singles Club allows experienced professionals from around the world to connect. Dr. Majlergaard said he is currently exploring expanding the club into South Africa.

He said the club does not have external investors because he wanted to prioritize the fundamentals and use the club for the benefit of its members. As a result, he said he has seen plenty of success through the connections he has helped to make.

“I have invested in building the club, tech, and taken on all the risks. It was quite costly, but it’s a great pleasure to help people with nowhere else to go,” he said.