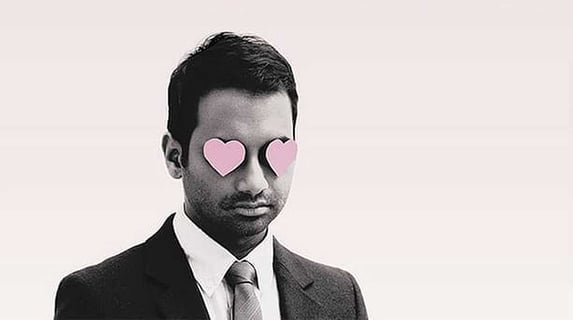 “Modern Romance”: The Pleasures and Perils of Present-Day Dating According to Aziz Ansari

Too often we have the thought, “I wish old-fashioned dating still existed.”

It’s sad that the modern-day dating world has evolved into a cyberspace platform of emojis, sexting and passive aggressive tweets, although the growth of technology alone cannot explain the transformation of our romantic lives.

Comedian Aziz Ansari took a special interest in this idea and other aspects of our contemporary love lives, and although he is now happily in a relationship, he is still fascinated by how people find each other. He is so interested, in fact, that he wrote a book about all of this nonsense called “Modern Romance.”

Inspired by his many rants about love and other drugs during his stand-up acts, Ansari teamed up with NYU sociology professor Eric Klinenberg to conduct studies and do research in an effort to create an academic, humorous analysis of modern romance. He even peppered it with his brand of humor.

In a realm where figuring out what to write over a text is more important than having a face-to-face conversation, Ansari breaks down how technology, online dating and other romantic innovations have changed the basis of love forever.

Calling All Daters: Single, In a Relationship, All of the Above

Rather than writing some sort of guide book for dating (because we all know that doesn’t work out), Ansari really delves into what people are doing in the modern-day dating world and what it means. No matter what your relationship status is, he has written something in this book that you can relate to.

“I didn’t want this book to be, you know, just for single people … who are out there now, but I wanted to kind of do an overview of dating and relationships as a whole,” Ansari told NPR’s Audie Cornish.

With the help of Professor Klinenberg, Ansari designed a massive research project where he conducted tons of interviews and focus groups everywhere from Wichita to Tokyo and Buenos Aires, analyzing behavioral data and surveys.

They even created their own online research forum on Reddit to ask people questions about open relationships, rules of those arrangements, dating profile consultants and other related topics.

After doing extensive research, Ansari came to a pretty universal conclusion that serves as a main theme for his book.

“You just realize everyone is dealing with the same nonsense,” Ansari told TIME Magazine. “Everyone is on this boat together, and it would probably be good if we were a little nicer on that boat.”

Why People Still Struggle for “The One”

One of the big questions that served as a basis for Ansari’s research was why, despite the millions of profiles available on dating platforms like Tinder and Match.com, people still struggle to find “The One” or even just someone to reply to a text.

He said the word “exhausting” came up numerous times in his research because so many people saw messages on a dating site as a second job, changing plans with someone as a nuisance or simply dealing with text messages as a burden.

In the same light, everyone has their own version of the “why won’t he or she reply to me and what did I do wrong?” dilemma. Ansari read through people’s real conversations over text and discovered timing and choice of words are both very important.

A few decades ago, people would simply find a decent person who lived in their neighborhood or building. The families would meet, and as long as no one seemed too crazy and the economic agreement was strong, the two people would marry.

That was “The One” for you.

Today marriage has been redefined because of technology and the general advancement of society, making the whole process of finding someone more difficult.

“The whole idea of finding a soul mate only became a thing in the past 100 years,” Ansari said. “So the whole redefinition of what marriage is — nobody’s really written this comprehensive book about this kind of thing. I think it’s really funny and very interesting.”

The Paradox of Choice in Modern-Day Dating

Ansari breaks down modern romance in the best way, by saying another huge reason we can’t find “The One” is because we have too many people to choose from. It’s ironic — you would think the more options means better chances.

But no. He discusses the paradox of the dating world today, where right now we have the most romantic possibilities that any generation has ever had, but because of that, people have a more difficult time choosing.

If someone does choose one person, they are also now more likely to be dissatisfied because there is always a thought that someone better is out there. There’s access to that person, too. It’s similar to the whole wandering eye concept.

Ansari does not believe technology is the demise of romance, but he does give great insight into why modern-dating is a double-edged sword.

“With all those things, there’s a good and a bad,” Ansari said. “Everyone is getting hit up more. With online dating, you can meet anyone. But the bad part of that is that’s a ton of people, and how do you sort through that?”

Ansari uses this book as a mode to analyze the transformation of romance and help people further understand why things are the way they are today.

He does a more than effective job of breaking down the modern-dating world and how romance has evolved from an old-fashioned innocent part of life to a dilemma that is consumed by cell phones, social media and online communication.