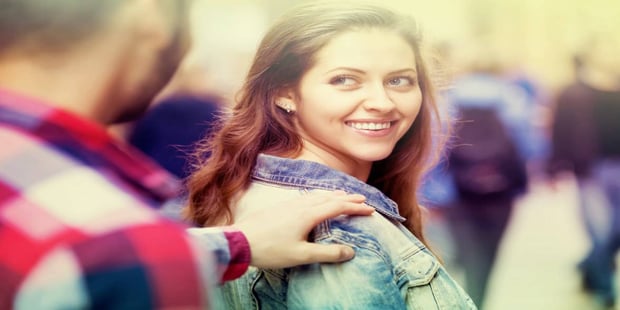 It’s Friday night and you’re out with your friends. You see this guy giving you the “I’m so into you look,” but he doesn’t approach you for some reason.

The night goes on and you catch eyes a few more times. He still hasn’t made a move.

It’s common to assume that the single guy should approach the single girl, so why isn’t this guy approaching you? Well, men have a lot of insecurities, and it takes a lot of courage to actually approach a woman.

While I can admit that he didn’t approach you because he didn’t have the guts to do so, more often than not you can help him make the first step simply by sending the right signals.

How can you get him to approach you? What are you doing wrong that stops the males from coming over for a conversation?

When it comes to being more approachable, things like your attitude, stance, friends, expression, energy and body language play a crucial role in the way you present yourself to men. These are the key denominators behind a guy’s approach decision.

This being said, if you want to become more approachable, pay close attention to these dating tips.

Attitude is incredibly important because it decides what types of men you attract. Basically, what you expect will happen will actually end up happening.

Guys who aren’t bastards won’t approach you because they can smell this a mile away. They see you aren’t happy, so they avoid any unpleasant encounters with you.

On the other hand, the men who will approach you will be the ones who don’t care about your attitude or how you feel, which means they will be the bastards.

You might think the bitchy girl gets all the guys, but in reality she only gets the bastards.

The truth is, there’s nothing more attractive than a woman with an uplifting attitude. It’s the same with men. Would you date a guy who thinks all women are bitches? Exactly.

Go out with a happy and healthy attitude toward men and you’ll have a much higher chance of attracting a high-quality guy in your life.

If you’re trying to maintain some image for whatever reason, think about how that is actually keeping you from getting what you want. Be happy about wanting to meet someone and drop your ego. It’s only going to work against you.

This is fairly straightforward. If you want a guy to approach you, act like it. Don’t cross your arms. Don’t fidget. Don’t look the other way.

Remember, you want to look happy, so don’t be afraid to smile. Don’t walk around with a sad grin on your face, acting like you’re not enjoying yourself.

Don’t be afraid to make eye contact with men you find attractive. Give them a warm and inviting gaze. Let them know you’re interested and they will approach you.

Avoid looking down at the floor or above people’s heads. Look straight so you can make eye contact.

“Even though it’s common for the guy to

approach, there’s nothing wrong if you do it.”

This can be traced back to the attitude issue, but it’s always great if a woman can seem inviting. Basically, you’re inviting a guy to come over and talk to you, and when he does, you act inviting toward the conversation.

When I approach women, I always have a much better and easier time with a woman who helps me interact with her. If she’s negative about our interaction, it makes it that much more difficult to continue the conversation.

If a guy you find attractive musters up the courage to come and talk to you, act inviting and he’ll be much more likely to stay.

You don’t need to drop this guard all the time for everyone, but drop it around the people you actually like – the guys you feel attracted to.

In order meet someone who is genuine, you need to be genuine yourself. Don’t be afraid to be the first person who shares a personal story. If you want people to be fun and open, be fun and open with them.

6. Have the right friends.

Oftentimes, women have a habit of condemning each other. This makes your fear of being called shameless perfectly reasonable, but this fear is also keeping you from meeting the right guy.

If you’re going out with girls who are going to judge you when you want to meet guys, then how do you expect to meet anyone? The only solution is to get rid of these friends. This isn’t always the case, but do this at least when you’re out trying to meet someone new.

Nobody wants to have someone talking behind their backs just because they wanted to meet a decent guy.

Avoiding the man-hater friend is also a good idea. She can give men that horrible look that will keep them at a great distance for the entire night.

Don’t make going out all about meeting new guys. If that’s the only thing you’re out there for, you’re going to have a much harder time when it doesn’t happen.

Going out purely with this mindset might make you come off as needy and desperate – things you don’t want a guy to think about you. Make the night fun, regardless of what’s going to happen.

8. Don’t be afraid to approach.

Even though it may be common sense for the guy to approach you, there’s nothing wrong if you do it.

Some men may be great guys but have a really hard time approaching women. If you make the first step, he won’t think you’re easy. He’ll just be happy you approached him. He will see you as a confident, fun and social woman who everyone would want to talk to.

Hopefully he’ll have the guts to at least continue the conversation once you’ve started it.