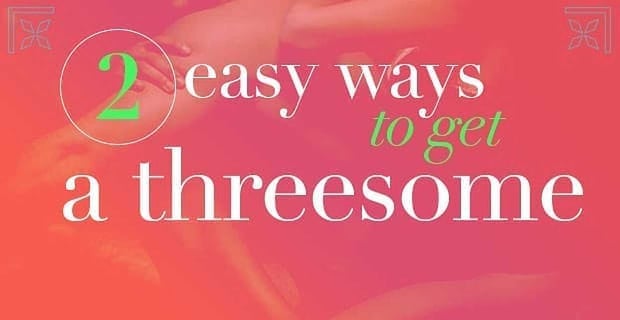 Throughout my days, I was fortunate enough to score quite a decent amount of girl-girl-guy threesomes. I’ve had the guy-guy-girl ones, too, but let’s be honest – you can’t really compare the two.

However, if you have the skill and determination, along with a good amount of patience, you’ll soon find yourself in bed with two gorgeous women.

This process is fairly easy, but the actual execution is difficult to turn around.

1. You need to be sleeping with two different women

Or you at least need to have slept with two different women recently. It’s going to be close to impossible if one of them has not slept with you.

The ideal scenario would be two girls you have regular casual sex with.

You want these girls to be open-minded, liberal and bi-curious or sexually adventurous.

2. One by one, when you’re alone, bring up the topic of bisexuality

It’s always a better idea to do this in bed before or after sex. If she shows any marginal interest, make sure you bring up the topic as a “thought experiment.” Make it seem very positive, and if she shows even more interest, try bringing it up during sex.

I’ve noticed many women are open to the idea, but most of them are not comfortable with it. That’s where you come in.

You need to make her feel comfortable about this. If you succeed, it will go a long way.

3. Bring it up in a different way

If you have both women comfortable with the idea, give it a bit of time. After let’s say a few weeks, bring it up again in a different way.

She won’t mind if you slept with the other one. On the contrary, it will increase her trust in the other.

If both girls seem keen on the idea, it shouldn’t be that hard to pull off.

Make sure you tell both women the exact same thing (that you might meet the other one tonight as well and if it’s OK to meet her, too).

Don’t plan it out, as that will only freak out the girls.

5. Make sure you plan everything right

When it happens, it has to seem very spontaneous, even though you gave each of them a heads-up.

6. You’ll know instantly if it’s going to happen or not

The girls will decide almost on the spot. You’ll quickly know if it’s working by the way they talk and act.

If it’s not going to happen, YES you’ve lost weeks of planning, but it was just a shot. Never forget the fact you were playing two women for the last months and you just tried to have them together.

Don’t stress it. Things blew up in my face countless times.

7. Bring in the alcohol

And lots of it.

8. The best thing to do is to get them to YOUR house

They’ve both been there and they’re comfortable with the location.

Just make sure when you make the proposition, you do it in a way that won’t freak them out instantly.

Note to remember: Quite a decent amount of women will freak out at the make-out scene. Don’t sweat it. If you got them here, you can get another two pretty soon.

A couple of years back, I was with this bisexual girl. She was great, but what made her even better was the fact she was into girls.

People think if a girl is bisexual, she’ll be bringing girls home for you to have sex with. Well, it doesn’t really work like that.

Being bisexual means she can either have a girlfriend or a boyfriend. If you want her to have them both at the same time, it’s going to be your job to make it all happen.

So here’s how you do it:

First of all, when it comes to picking up other girls, your bisexual girlfriend should be doing all the pulling. She’ll own you at it because:

The only time she will ever need help is with groups of girls. Girls are not like us, being able to open a big group and alienate one of the girls.

That’s where you come in: Just pick the one you like and separate her from the group. Before you know it, your girlfriend is there prepping her up.

Most girlfriends love doing things together. This includes “picking up together,” but when you tell them, “OK, go open up that group and pick that blonde over there,” they just get nervous and want to stay the night with you.

Anyway, the reason you still want her to open is because she knows instantly if the other girl is up for it.

A few times I still managed to get the second girl all by myself (at least one hour of work, compared to 10 minutes by my girlfriend).

In this scenario, apart from my girlfriend being upset that she’s been sitting alone for the last hour, she would also think the other one just wanted to have sex with me, not with US.

It’s paramount to remember threesomes are all about the girls. You’re just along for the ride.

She will do the pickup and she will bring her to you. Then you start flirting and generally getting to know each other. By this time, YOUR girlfriend should make the proposition of coming home with you.

Now, it’s here where most of them realize this is actually for real and freak out. In my experience, about half of them do that. They either leave straight up or are flattered but can’t actually do it.

If you’re lucky and she agrees, it’s up to you to sort everything out. Get them drinks, keep them feeling good and entertained, flirt with them both, be sexual with both, etc.

This is when they start to gang up on you. They all do it, all the time. They tease you or make fun of you. Let it happen!

I usually just sit there thinking to myself, “Blah, blah, blah. In about an hour, I’m going to have sex with both of you. Haha!”

All they said and teased didn’t really matter. I do have to admit it might feel uncomfortable sometimes, but deal with it. You’re a man, right?

Either you or your girlfriend can initiate the kiss. Initially, I always let my girlfriend do it, but as we did it more, I tried it myself and it worked just as good.

Now it’s time to take them home. Like always, let them get comfortable once you get home. Make more drinks. Put on some music and let loose.

They can still freak out at this point, but if they got this far, most of them will let it happen.

One last note to remember

You and your girlfriend need to clarify everything before you embark on this journey. Make sure you let her go down on the other girl or the other way around.

Also make sure you’re going to have sex with the other girl, otherwise all of this is absolutely pointless.

This is the sort of stuff I discuss on my blog and in the free ebook I give out. If you want to increase your success with women, visit ThePlayerGuide.com – a place where the dating mindset is thrown out the window in favor of more direct and fruitful methods of meeting and seducing women.