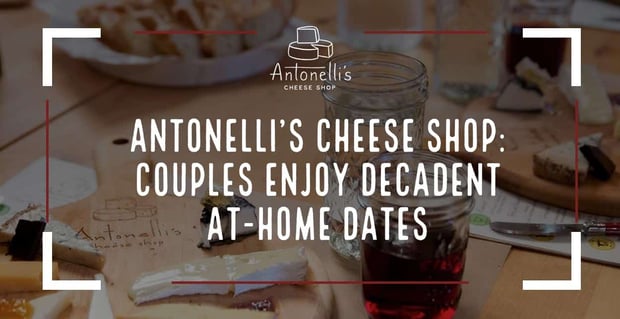 The Short Version: Antonelli’s Cheese Shop in Austin, Texas, has been selling unique, handpicked cheeses to daters for more than a decade. But when social distancing became the norm, the husband-and-wife operating team quickly shifted their business model to serve their customers. Now, Antonelli’s caters to cheese-lovers around the country through its delivery services and monthly subscription boxes. Couples can even participate in live virtual events to learn more about cheese and the people who produce it.

John and Kendall Antonelli didn’t always plan to run a cheese shop. At one time, John worked as a CPA, while Kendall ran a program at a local nonprofit.

While on vacation, John realized that he didn’t want to go back to work. When Kendall asked him what he wanted to do instead, he responded, “Something in cheese.”

“We say that we didn’t pick cheese. Cheese picked us,” said Kendall with a laugh.

John vowed to write a business plan for a local cheese shop in their hometown of Austin, Texas. And if he hadn’t started the business within two years, John promised his wife he’d return to being a CPA.

“John interned at a local diner, and then in France. We traveled to France, Italy, and Switzerland. Later, we ran a gourmet grilled cheese club out of our house. We loved being together and eating,” Kendall said.

Eventually, the husband-and-wife team opened Antonelli’s Cheese Shop. They envisioned the shop as a place where they could pull out bites of cheese for patrons to try. They stocked not only cheeses but also items with which to pair cheese, including crackers and charcuterie. They also recommend beer and jam pairings.

When John and Kendall opened the shop 10 years ago, they thought they’d only operate for a few years. Now, just over a decade later, Antonelli’s Cheese Shop is still going strong.

While the couple had to adjust their business model during COVID-19 pandemic restrictions, they ended up expanding their shop even more nationwide by developing robust new offerings. Now, couples around the country can enjoy the shop’s cheese boxes, subscription packages, and virtual cheese-tasting classes for date night.

Before the COVID-19 restrictions, Antonelli’s was a bustling location in the Hyde Park neighborhood of Austin. Singles, couples, and families would come to the shop for the hand-cut cheese samples available.

“We cut our cheese to order. As soon as you cut it, it can start to die if you don’t consume it,” Kendall said.

Couples would also drop by to pick up supplies for romantic date nights, including chocolates and beer.

Antonelli’s also hosted regular cheese classes and tastings at its Cheese House, but the tastings weren’t limited to cheese, and include specialty foods like chocolates and cured meats. Antonelli’s doesn’t make cheese, but John and Kendall know a lot about those who make the cheeses they sell.

“Our classes are purely about relaxing and enjoying the flavors and stories,” said Kendall.

Since quarantine, however, Antonelli’s hasn’t been open for business as usual. Instead, John and Kendall have pivoted their business model. Customers in Austin can place orders for curbside pickup, while couples around the country can have cheeses delivered to their door.

Some customers prefer to order cheeses a la carte, and the store offers several options. They can order a bag of cheeses, which includes three varieties, olives, and nuts. They could also opt for a bag of four classic French cheeses or one produced in Texas.

The shop also lets customers select their favorite cheese, including burrata or chèvre, by the pound.

Those hosting larger gatherings in Austin can purchase cheese trays, as well. Customers can place cheese orders online or by phone.

Fostering a Sense of Community with Events and Gift Boxes

After six months in quarantine, couples may be tired of their at-home dating routine. They could decide to shake things up by ordering a Cheese Class in a Box from Antonelli’s Cheese Shop.

The box contains a pound-and-a-half of artisanal cheeses. Couples will also find the crackers, salami, honey, and chocolate that complement the cheeses they ordered.

That’s the cheese part of the box. The class part comes in the pre-recorded video link to the Seven Styles of Cheese class presented by John and Kendall.

“The box ships anywhere in the country, and we’ve seen lots of people do it as a date. The video explains how to plate the cheese, and then there’s an hour-long tasting my husband and I did where we talk about the flavors and the stories,” Kendall said.

Partners enjoy the Cheese Class in a Box so much that they often decide to participate in one of the shop’s virtual cheese tastings. Once they book an event, Antonelli’s Cheese Shop delivers their cheese or, if they’re local, allows them to pick it up curbside.

Then, they’ll participate in a class with a cheesemonger, who will explain how cheese is made or what’s unique about certain styles.

“These aren’t boring tutorials. We think cheese should be fun and approachable,” Kendall said.

Another fun way to experience Antonelli’s Cheese Shop with a date is by signing up for the Cheese Club. Members will receive several delicious cheeses each month and can sign up for a three-, six-, or twelve-month subscription.

“Each month’s selection varies, generally offering three to five cheeses and sometimes including a pairing like regional preserves, honey, or chocolate. When we receive hard-to-get, seasonal, small-batch/limited production treats, our Cheese Club members get first dibs,” reads a post on the Antonelli’s Cheese Shop website.

Over the last six months, Antonelli’s has made an extraordinary pivot. Once only focused on in-person tastings and events, the cheese shop has expanded well outside of Texas. Now, more clients around the country can enjoy the artisanal cheeses the shop offers.

Kendall said she’s also surprised by how Antonelli’s Cheese Shop’s offerings bring family and friends together. She’s said she’s seen family members across the country order the same cheese box and then gather together on Zoom calls to eat together.

“They’re all unpacking their boxes and enjoying the cheese in real time together on Zoom. An unintended result of our box is that it’s bringing people together in ways we didn’t imagine,” Kendall said.

For those who can get 12 of their friends to order cheese boxes, Antonelli’s Cheese Shop will even help bring a live cheesemonger to their tasting.

Further, the Antonellis are hosting more live events than ever before, with an average of 15 to 20 virtual sessions each week.

Still, the couple said they look forward to opening the shop to the public again. Kendall recounted the story of how the shop grew up alongside the community in Austin.

“We had two little boys whose parents thought they were getting ice cream, but they were buying cheese. Once, they came in and told me that they’d already tried a cheese I’d recommended. Sure enough, I checked their cheese log — we have a cheese log recording everybody’s cheeses — and saw they were right. We saw them grow up from six to 16,” she said.

Though Antonelli’s Cheese Shop is a little different than it was before COVID-19, John and Kendall were still able to celebrate their 10th anniversary in February. Whether they’re operating an ecommerce shop or a brick-and-mortar establishment, the Antonellis are happy to continue fulfilling their business mission of “Do Good. Eat Good.”