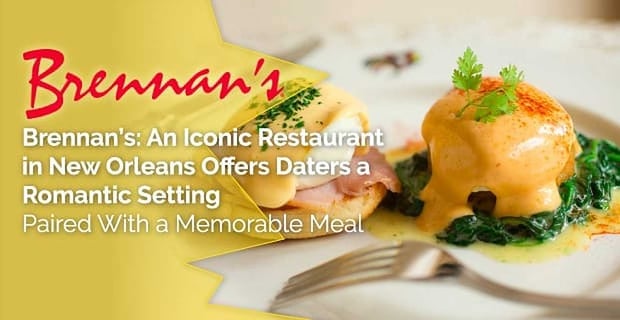 The Short Version: Brennan’s is a cherished date spot for New Orleans residents and visitors in the mood for an upscale meal. Located on Royal Street in the French Quarter, the landmark restaurant has a reputation for its opulent breakfasts, indulgent desserts, and high-society atmosphere. Owen Brennan founded his first restaurant in 1946 and took an innovative approach to classic Creole flavors. Brennan’s wowed guests by serving the first Bananas Foster, which was flambéed table-side, in the early 1950s, and the award-winning culinary team has continued to come up with creative and impressive dishes for breakfast, lunch, dinner, and dessert. Over the years, this two-story pink building has hosted countless wedding receptions, wedding ceremonies, anniversaries parties, and other large events in its charming private rooms and outdoor courtyard. Whether you’re going on a date or planning a wedding, you can set the mood by booking a table Brennan’s.

Over 40 years ago, my parents spent their honeymoon in New Orleans drinking hurricanes and savoring spicy seafood dishes. They loved the city’s unique flavor and have returned many times to recreate those special memories, and maybe catch an LSU football game while they’re in town.

In the 1950s, Brennan’s offered the first-ever Bananas Foster flambéed at the table.

During one visit, my parents had dinner at a classic New Orleans restaurant called Brennan’s. They sat at a table for two and sampled rich foods dripping with creamy sauces. For dessert, they decided to try something new and ordered Bananas Foster, a rum-infused ice cream dish invented by the restaurant’s head chef in 1951. They were amazed when a chef came by their table to flambé the dish before their eyes, and the caramelized bananas swimming in ice cream and a sweet rum sauce soon had them on cloud nine.

Brennan’s offers much more than a meal — it offers an unforgettable experience in the Paris of the South. The upscale restaurant is meant to look like an old-fashioned Southern home with colorful wallpaper, white tablecloths, and large picturesque windows looking out on Royal Street. Its impressive menu is rooted in Creole traditions and served in a contemporary style.

Executive Chef Slade Rushing, a James Beard Award finalist, is at the helm of the kitchen and sets a high standard for culinary excellence. He gives classic New Orleans dishes a modern twist by using innovative techniques and fresh seasonal ingredients. Whether you’re hankering for a seafood gumbo or a rack of lamb, you can satisfy your taste buds at this elegant restaurant in the heart of New Orleans.

Brennan’s has a dress code, so you won’t find anyone in shorts, cut-off jeans, or flip-flops here. Most guests put on their Sunday best when stopping by Brennan’s for breakfast, brunch, or dinner. You’ll see a mix of tourists and locals seated inside and outside. Some are celebrating weddings, birthdays, or anniversaries, and some are just there to enjoy an unparalleled service and first-rate food.

According to publicist Meaghan Donohoe Regan, “Brennan’s is a lovely place for a date due to its old-world-inspired dining rooms and personable, attentive service that creates a unique and romantic dining experience.”

The Historic Pink Building Became the Birthplace of Bananas Foster

You can’t miss Brennan’s when you’re walking down Royal Street in the French Quarter. It’s a two-story pink building that was originally constructed in 1795. This landmark building is part of the city’s history. Before it became one of the most well-known restaurants in New Orleans, it housed the first bank established in the Louisiana Purchase territory.

In the mid-19th century, a wealthy chess champion named Paul Morphy took up residence here for 40 years. His family sold the mansion in 1891. It changed hands a few times before being leased by Owen Brennan in 1954.

Owen Brennan was the proprietor of the famed Old Absinthe House bar on the corner of Rue Bourbon and Rue Bienville. He had decided to expand to open his first restaurant in 1946 after being teased by Count Arnaud Cazenave (owner of Arnaud’s) that all Irishmen knew how to cook was boiled potatoes. Brennan felt determined to prove him wrong.

His first restaurant, Owen Brennan’s Vieux Carre Restaurant on Bourbon Street, was a remarkable success. The restaurant became well known for its decadent Breakfast at Brennan’s buffets and classic Creole food. When Brennan’s moved to the historic pink building on Royal Street, loyal patrons dined at the old restaurant before parading down the street to its new home.

The Chanteclair Room, which opens into the Courtyard, is the largest dining room at Brennan’s.

In 1951, Owen challenged his head chef to come up with a dessert that incorporated bananas to help his younger brother, who owned a produce company, deal with a surplus of the fruit. Chef Paul Blangé and Ella Brennan (Owen’s sister) put their heads together and came up with an ice cream dish swimming in a brown sugar and rum sauce with bananas flambéed in spectacular fashion. Owen named the dish after his friend and added Bananas Foster to the menu. It’s now the most ordered dish at the restaurant.

Throughout the decades, ownership of Brennan’s has stayed in the family. In 2013, third-generation restauranteur Ralph Brennan (Owen’s nephew) took over Brennan’s on Royal Street. He and his partner Terry White then spent $20 million renovating the old building to return it to its former glory. Today, this historic and contemporary restaurant reminds New Orleans visitors and residents of the tradition of fine dining that made the city great.

Enjoy a Festive Breakfast or an Indulgent Dinner

You don’t have to wait until dinnertime to have a fun date at Brennan’s. The restaurant made a name for itself because of its unlimited buffet-style breakfasts served daily. The menu includes sweet and savory dishes that represent the best of Creole flavors. You can dig into a baked apple with a brown sugar glaze or a crawfish and mushroom omelette with lobster sauce with a Cajun Bloody Mary or New-Orleans style coffee to wash it down.

“Breakfast at Brennan’s ​a beloved institution,” Meaghan said. “It is a celebration, a tradition, and an expression that trips off the tongue. ​Guests love the​​ experience ​because it is a long and festive morning parade.”

Dinner at Brennan’s is also a treat. The servers are known for presenting visually stunning dishes, some of which are flambéed in front of guests. The restaurant’s signature dishes include Louisiana Seafood Filé Gumbo, Turtle Soup, Blackened Redfish, and Smoked Amish Duck Breast.

And, of course, you can’t miss out on the legendary Bananas Foster, a perfect dessert for couples with a sweet tooth. This fun dessert is a great conversation starter and will have many diners eyeing your table with envy.

Before or after your meal, you can head to the Roost Bar where smiling bartenders serve fizzing champagne cocktails from 9 a.m. until 10 p.m. Monday through Friday and from 8 a.m. until 10 p.m. on the weekend. Brennan’s is credited with inventing the Bloody Bull cocktail, which is basically a Bloody Mary enriched by beef broth, so you can expect its drinks to be on point. Plus, the restaurant’s two-story wine cellar has over 1,4000 selections, including over 100 champagnes and sparkling wines to pair with your meal.

“Brennan’s is where you can dine like a local on high-end French Creole cuisine,” Meaghan said. “Chef Slade Rushing takes a modern approach to classic traditional New Orleans fare.”

Everything on the menu at Brennan’s has been carefully thought-out by culinary masters on a mission to highlight spicy and soulful flavors in a way that’s never been done before. The website even posts recipes for its dishes, including its Artisanal Eggs Benedict, so you can take a taste of New Orleans back home with you.

An Award-Winning Spot for a Private Event or Wedding

Brennan’s offers a lavish setting for a classic New Orleans meal or a hassle-free private party. The iconic pink building, located in the French Quarter of the city, serves as a lovely venue for rehearsal dinners, wedding ceremonies, receptions, bridal party luncheons, bachelor or bachelorette parties, and farewell breakfasts. You can book a private event online, and a members of the events team will be in contact to make all the necessary arrangements.

The restaurant’s eight dining spaces can host up to 350 guests at a time. You can choose to be seated on the first floor in the elegant Chanteclair Room, or you can have an intimate reception in one of the four rooms on the second floor, which can accommodate 200 guests reception style. The Courtyard is a popular place for wedding ceremonies because of its quaint open-air atmosphere (the restaurant provides a tent in case of rain).

“Our ceremony in the Courtyard could not have been any more beautiful,” said Lyndsey E., who had both her rehearsal dinner and wedding ceremony at Brennan’s. “The staff at Brennan’s pulled out all the stops to ensure it was everything we hoped for.”

“Gorgeous space, out-of-this-world food, and amazing service.” — Alice L, a bride who had her reception at Brennan’s

“Brennan’s is the perfect place for a wedding,” Meaghan told us. “Brennan’s customizes each event, based on individual wishes and requirements, and will help create a memorable occasion, every step of the way.” Brennan’s partners with florists, musicians, photographers, and other vendors to ensure everything goes smoothly.

“What was truly amazing was the level of attention and service that the team at Brennan’s provided,” said Alice L. about her reception. “We never worried about a thing and always had a drink in hand…The decor at Brennan’s is also gorgeous and felt so quintessential French quarter.”

Brennan’s Has Delighted Couples for Over 70 Years

My parents aren’t the only couple to wander into Brennan’s and enjoy a romantic meal at a table for two. The longstanding restaurant has hosted countless dates, weddings, family celebrations, and other special events through the decades. Since it opened its doors over 70 years ago, Brennan’s has been a treasured staple in the heart of the French Quarter.

Brennan’s may be old, but it’s still going strong. The restaurant was named among the Top Ten New Orleans Restaurants in 2017 and 2018 by the Times-Picayune newspaper. Brennan’s even published its first children’s book “A Topsy, Turvy History of New Orleans & Ten Tiny Turtles” in January 2018 to recognize the city’s colorful 300-year history.

Brennan’s offers daters a memorable dining experience in the heart of the French Quarter.

Whether they’re coming tableside to set desserts aflame or rolling out the red carpet for newlyweds, the restaurant’s staff go the extra mile to provide diners with memories they’ll cherish for a lifetime. What surprises does Brennan’s have in store next? Guess you’ll have to visit the New Orleans restaurant and see for yourself.

“Ralph Brennan believes it is important to continue the tradition and history of the iconic French Quarter restaurant,” Meaghan said, “and bring it back to its original glory as a place of celebration and fine dining.”