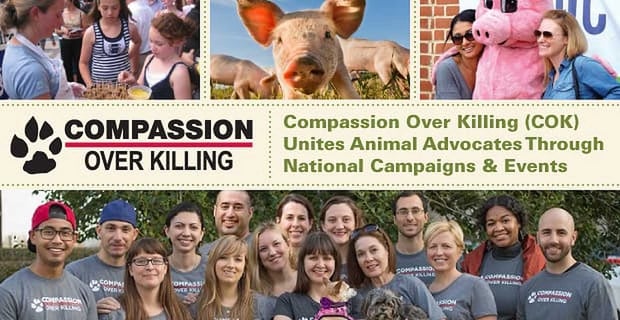 The Short Version: What began in a high school classroom in the ‘90s has now grown into a national call for greater transparency, morality, and empathy in animal treatment. Over the decades, Compassion Over Killing has raised awareness about animal cruelty through hard-hitting investigations, organized campaigns, and free events. The nonprofit organization encourages thousands of supporters to get involved in advocacy projects that push for permanent changes in how we treat animals. If you want to network with benevolent and vegan-friendly people, volunteering with COK brings you into a community united by shared values and a common vision for a kinder future.

From protesting stores selling animal fur to going undercover in slaughterhouses, Compassion Over Killing made a name for itself as a passionate champion for the voiceless hens, pigs, foxes, cows, and all animals abused by profit-driven corporations. Over the decades, the organization has won many victories, particularly in the food industry, such as ending cruel practices at major companies like Tyson and Perdue. By shining a light on what goes on behind the scenes, Compassion Over Killing motivates consumers to seek better standards of treatment for farm animals.

“Since 1995, COK has served as an unwavering force bringing about positive changes for animals,” said Erica Meier, Executive Director at COK. “Thanks to our many generous supporters and dedicated team, we’ve come a long way in our short history.”

From humble beginnings as an all-volunteer high school club, Compassion Over Killing has grown into a national organization speaking on behalf of animals everywhere. If you’re interested in putting a stop to the needless suffering of millions of animals, you can support COK’s campaigns and events as a volunteer. By working together on a common cause, volunteers create strong bonds and relationships with like-minded people.

“Volunteering with COK is a fun and effective way to be a voice for farm animals and to inspire others to make compassionate choices,” Erica told us. “It can also provide a welcoming community and a network of supportive animal advocates who share your passion and enthusiasm.”

Compassion Over Killing organizes nationwide campaigns to influence people and companies to make more animal-friendly decisions. From adding soy milk to coffee to participating in vegan challenges, the group recommends taking meaningful steps to change the food culture in the US.

Through petitions and advocacy work, Compassion Over Killing has convinced several major food chains in the US, such as Starbucks and Dunkin’s Donuts, to add vegan options to their menus. According to Erica, “We’ve also convinced food retailers, such as BOCA Foods and Quorn, to significantly reduce their use of animal ingredients throughout their entire product lines.” You can read more about COK’s campaign victories here.

Since 2004, COK’s Legal Advocacy Program has fought against the cruelty of factory farming by filing charges and making a legal argument for fairer, safer, and kinder practices. “Our investigative and legal advocacy efforts have also ended the use of misleading ‘humane’ claims on consumer products,” Erica explained. “With a small staff of passionate individuals and our dedicated volunteers and supporters, COK is able to achieve remarkable victories and groundbreaking progress for animals each year.”

The COK legal team uses existing laws to target and eliminate large-scale animal cruelty practices by agribusinesses in the US.

Additionally, the group’s investigative work shines a light on the gruesome, negligent, and cruel practices involved in putting meat on the table. In February 2017, COK investigated Superior Farms and gave the American public a revealing look inside a lamb slaughterhouse in Dixon, California. Over the course of several months, a hidden camera captured multiple violations of the Humane Methods of Slaughter Act as well as deceptive food labeling practices. The exposé caught the attention of the New York Times and prompted an investigation by the Department of Agriculture into the plant run by the nation’s largest lamb producer.

“Time and again, Compassion Over Killing’s investigations have shed light on egregious abuse kept hidden behind the closed doors of factory farms,” said Erica Meier, Executive Director at COK. “The best way to help lambs and all animals is to leave them off our plates.”

Even after all they have accomplished, the Compassion Over Killing team remains determined to do more to make a lasting impact in the lives of animals. Erica told us the organization seeks to grow its reach over time by raising awareness and building support for a no-kill food industry. “COK will continue our powerful undercover investigations, inspiring outreach, innovative legal advocacy, and effective nationwide corporate campaigns to create more vegan options on mainstream menus,” she said.

Every year, Compassion Over Killing organizes a jubilant celebration of vegan culture. The DC VegFest is the largest vegan festival held in the nation’s capital — and it’s free! The outdoor event provides a great opportunity to take a date out on the town to enjoy live music, fun activities, and a community atmosphere focused on kindness and compassion.

From the Barking Lot where dogs romp around to the beer garden where adults cool off and enjoy free samples, the outdoor event has so much to offer people in the DC area. Over 130 vendors line up to tempt attendees with vegan fare and cooking demonstrations. On the main stage, knowledgeable speakers, nutritionists, rappers, yoga instructors, and musicians share insights into holistic living in positive presentations held throughout the day.

At the upcoming DC VegFest in September, COK expects upward of 20,000 vegetarians, vegans, and animal rights activists to show up. If you’re curious about vegan culture, or want to show a loved one what kinder living is all about, you can stop by the Yards Park to enjoy an afternoon surrounded by health-conscious and compassionate individuals. Want to get even more involved? You can sign up as a volunteer at the event and make friends with COK helpers like you.

When you become active in a cause you believe in, you open the door to many new relationships and experiences, which can help you grow as a person and maybe even meet someone special.

“To adopt a plant-based lifestyle is simply to acknowledge that compassion falls into your worldview, and to act accordingly.” — Dotsie Bausch, an Olympic Gold Medalist who supports the VegWeek Campaign

Compassion Over Killing hosts many educational and engaging events throughout the year to make veganism more accessible to anyone and everyone. In an international effort to reduce meat consumption, COK challenges people to join celebrity endorsers, including Alicia Silverstone and John Lewis, in going vegan for seven days in celebration of Earth Day. Each year, the VegWeek campaign introduces thousands of participants to the vegan lifestyle with special discounts, recipes, and tips to support them along the way.

As Erica said, “Our staff and volunteer teams empower individuals to explore the many benefits and flavors of vegan eating by organizing or participating in various outreach events, providing free online literature and recipes, creating inspiring and informative videos, and much more.”

Volunteerism Helps You Network With People Who Share Your Values

To inspire people to go vegan or speak out for animal rights, COK staffers and volunteers travel from coast to coast giving talks, tabling at events, and handing out literature. Their efforts seek to inform individuals about the many benefits of a vegan lifestyle — and the terrible cost of accepting the status quo. So far in 2017, COK has given out over 2,000 pieces of pro-veg literature and 2,000 free vegan food samples.

COK volunteers work to impact and inform consumer choices and make the world a better place for animals to live.

In all its efforts, Compassion Over Killing relies on the support of average individuals who care enough to lend a hand to the cause.

You can read about COK’s volunteer opportunities, internship programs, and job openings online to learn how you can get involved. The nonprofit encourages people to have fun together while working on advocacy projects.

Whether helping out at a speaking event in Arizona or working in the Washington DC or LA offices, joining forces with Compassion Over Killing gives you the chance to make a friend while making a difference.

“We’re always looking for caring individuals nationwide to help with outreach events as well as campaigns,” said Erica. “We hear from many people new to vegetarian and vegan eating that they feel motivated by COK’s positive and empowering message.”

Join COK to Show Support For a Kinder Way of Life

A veg-based lifestyle is good for the environment, your health, and the well-being of the animals who share the planet with us. After knowing what’s at stake, many people decide to rally behind the cause to stop animal cruelty by adjusting their diets or volunteering with animal rights campaigns.

Since 1995, when a 16-year-old brought his classmates together over shared ideals, Compassion Over Killing has spoken on behalf of the cows, pigs, sheep, chickens, and other animals of the world. Through its investigations, legal actions, and educational events, the international organization promotes a vegan diet, transparent food labeling, humane animal treatment, and other compassionate values.

“Though the obstacles we face are many, COK is more determined than ever in our mission to build a kinder world for all,” Erica said, “and we are fortunate to have dedicated supporters and volunteers who stand with us.”

As Seba Johnson, a vegan Olympic athlete, noted, “Now more than ever, there is a great need for empathy. Let’s start lessening the amount of suffering in the world.”