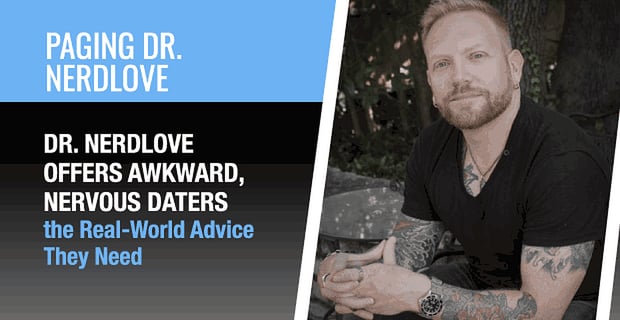 Short version: Harris O’Malley, better known as Dr. NerdLove, wasn’t entirely successful in the dating world earlier in his life. In fact, he was often overlooked by women, until he learned strategies that helped him gain more confidence in his flirting abilities. But after years of anonymous hookups, Harris realized that he didn’t even recognize himself anymore. Out of his self-transformation to a more confident and authentic dater, an interest in helping others cultivate compassionate dating personalities was born. Harris created his website, PagingDrNerdLove.com, as well as books and tutorials, to help daters overcome their dating issues and find fulfilling relationships in which they can stay true to themselves.

As a young man, Harris O’Malley, better known now as Dr. NerdLove, was often overlooked when it came to dating.

“One of the things I tell my clients and readers is that I’ve had all the same problems they had — and often worse,” Harris said. “I was completely clueless. My idea of flirting was asking women, ‘Do you like stuff?’ The only relationships I had were accidental at best. And one of my formative relationships was toxic.”

With this attitude, Harris was certainly not finding the romance he sought. After a particularly difficult rejection, he decided to research strategies that would make him more charismatic.

Harris O’Malley, aka Dr. NerdLove, helps his clients ditch the dating games in favor of self-confidence and authenticity.

“I discovered Neil Strauss’s ‘The Game,’” Harris said. “It was transformative; it changed my life.”

His life then became all about attracting women he would meet at clubs, courting them, and having sex. Throughout several years of this, Harris never considered building a long-term relationship. But one night, he had an epiphany.

“One night, I was leaving a club with this woman when I realized that I didn’t like her,” he said. “I didn’t like the clubs, and I’d been spending a small fortune on drinks and cover charges, but I was almost never having a good time.”

This realization eventually led Harris to change his life, and with a shift in mentality, Paging Dr. NerdLove was born.

Not only did he improve his own attitude, but he developed a website, books, and tutorials to teach — mostly — men strategies for dating, sex, and relationships that don’t make them feel bad about themselves.

Though Harris enjoyed the success he felt in courting women, he didn’t like the way his behavior made him feel.

“My entire goal in talking with a woman was to sleep with her and then never call her again,” he said. “I realized that I couldn’t keep doing this. I’d become this manipulative, toxic person. I liked the sex and the success, but I wanted to know if I could be successful without being so fake.”

Harris aimed to understand what dating tips worked without making those who used them feel inauthentic.

“I had to figure out what was real,” he said. “I was reading book after book about persuasion, influence, sex, and society’s treatment of sex. I learned about Feminism 101, and realized what I’d believed about being a man was really toxic.”

One day, on a whim, he started answering questions from the public as part of his podcast, The League of Extremely Ordinary Gentlemen. So many people had questions about dating and love for Harris that he didn’t have time to answer them all.

“The episode went well, so we did another one,” Harris said. “I threw together a video on the questions we didn’t answer, and, it was so popular, the listeners sent in more questions.”

“Being a man is not about how much sex you have, or how much money you make. But rather, it’s internal; it’s about who you are, not what you do.” — Harris O’Malley, Dr. NerdLove

The attention his podcast and video received was astonishing. Harris knew that he had an opportunity to develop a website mostly centered around helping people through their dilemmas in love and dating.

“My work is about how you do this or handle that,” he said. “I talk about social issues like the #MeToo movement, or what the difference is between harassment and flirting. I aim to teach positive masculinity, the ways to be a man in ways that aren’t narrow.”

He promotes an inclusive, far-reaching conception of masculinity.

“Being a man is not about how much sex you have, or how much money you make,” Harris said. “But rather, it’s internal; it’s about who you are, not what you do.”

Harris O’Malley Teaches Others What He Wishes He’d Known

Many of Harris’ formative experiences with dating and sex were traumatic. So, his goal with Paging Dr. NerdLove is to provide others with information that can help them avoid experiencing the hardships he did.

“The whole goal is teaching people how to date,” he said. “I discuss all the things I wish I’d learned earlier. My goal is to teach people to learn from my mistakes.”

While advising others, Harris practices the kindness that he wants his followers to bring into their own dating lives.

“I try to treat my advice-giving like a mix between the coach from ‘Friday Night Lights’ and a concerned older brother,” Harris said. “A little bit of friendliness, bluntness, and motivation — you can do this, you have the ability.”

He often uses his own experiences in the dating scene as a cautionary tale for others, and his goal is to be the resource for others that he never had growing up.

Often, Harris said his role is centered around encouraging readers to see themselves as desirable — even in their present state, not only after they’ve changed what they dislike about themselves.

“What I’m trying to do is help them stop defining themselves by their limitations,” Harris said. “A lot of the issues I see over and over again stem from people deciding they can’t do something because it’s part of their identity. They think, ‘if I were a different person, maybe I could be a different way.’”

In addition to his website, Harris offers his followers innovative methods for becoming better daters.

One of his books, “New Game +: The Geek’s Guide to Love, Sex, & Dating,” is a dating manual for nerdy men. The book aims to demystify engaging with the opposite sex without offering up any manipulative tactics.

His most recent book is “I Got Her Number: Now What?” which aims to help readers move beyond a successful interaction.

“They can get the number, but they don’t know the rules when texting or messaging someone,” Harris said. “How often is too often? What do I say?”

Next up, Harris is developing an instructional guide for having respectful, fulfilling sex.

“It’s about finding the sex that you want without losing your soul in the process,” Harris said. “People think there’s a line between someone who has a lot of sex and someone who is polite and respectful. But the two are not mutually exclusive. You can be promiscuous but also be an actively polite, caring, and conscientious person.”

For would-be daters who need more of a push, Harris is creating online and in-person courses that lead daters through the steps of courtship.

“I’m working on the Dating Accelerator, which is a multi-week course that teaches everything about how to become a more powerful, active person in your dating life,” he said. “Here’s how you dress, flirt, and recognize people are sending you signals. Know if they’re comfortable with you, or ready for you to lean in for the kiss.”

“I’ll be doing some Dating 101 workshops over the next couple months,” he said. “From there, I’ll bring those around the country and do three-day workshops.”

Harris also produces regular podcasts and YouTube videos that explain contemporary concepts in dating and sex in an easy-to-absorb format.

Ultimately, Harris wants to give his followers a more positive outlook on their own self-improvement. His techniques help men break down the barriers they place in front of themselves.

“There’s always going to be a reason you can’t do something,” he said. “Part of what I teach people is to stop waiting. You can make improvements now, instead of following step A then B then C. You can treat it like a web where you’re doing things simultaneously, and one feeds into the other.”

Harris said he feels proud of the impact he’s had on the level of self-confidence daters demonstrate after working with him. He often hears from clients who tell him that he has helped change their lives.

“They realized they had so much potential. A lot of guys have told me they could go out and flirt with people and get phone numbers and dates. I had some people tell me they’re married now based on what I taught them,” he said.