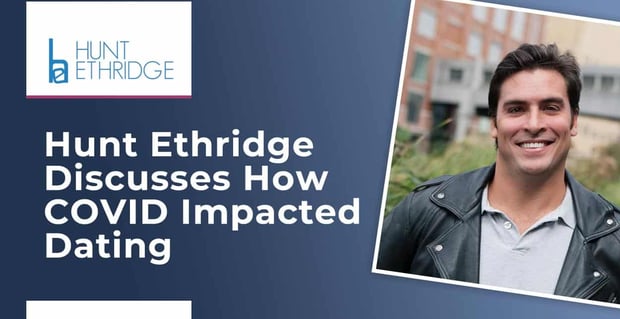 The Short Version: Hunt Ethridge has been working in the dating industry for over a decade, and he has never seen anything like the dramatic cultural shifts taking place during the COVID-19 pandemic. As a professional dating coach, Hunt works closely with singles and hears their stories and concerns on a regular basis. Over the past year, he has helped guide his clients through the challenges of social distancing and video dates while developing high-tech solutions designed to power the future of dating and matchmaking.

On March 2, 2020, dating coach Hunt Ethridge welcomed his second daughter into the world. The next day, New Jersey reported its first coronavirus case at a hospital less than 10 minutes away from the Englewood hospital where Hunt’s daughter was born.

Hunt’s family left the hospital March 5 as reports spread of more diagnosed cases across New Jersey. “I remember that day that all the doors were closed, tons more doctors were there, and no one was telling us what was up,” Hunt said. “So my daughter Eden has become a visual representation of how long this thing has been going on.”

Eden is over a year old and walking now, and the COVID-19 pandemic rages on around the world.

Hunt Ethridge teaches dating skills and strategies to singles around the world.

When the pandemic first hit, Hunt said he had already planned on taking time off for paternity leave. So, even though business at his private coaching firm Hunt for Advice had ground to a halt, he said he wasn’t too affected. His focus was on keeping his family safe and sane. “One was definitely easier than the other,” he quipped.

In the summer of 2020, Hunt said he returned to the dating industry to find it full of frustration and pent-up energy. He coached singles on how to navigate a new form of socially distanced dating, and he saw virtual relationships thrive. Now nearly halfway into 2021, Hunt said he sees more reason to hope and looks forward to seeing daters build relationships with greater purpose, insight, and appreciation.

Hunt said all the ups and downs of the last year have shown him just how resilient his business and his clients are.

“I don’t think you can throw anything at me anymore,” Hunt said when asked about his future plans. “Not tempting the fates. Just feel like we’ve had to weather some bad storms and now have the tools and skills to do it better if and when there’s another Thing.”

Prior to the COVID-19 pandemic, Hunt had pursued online and virtual coaching services because that enabled him to reach clients all over the world. That became vital to keeping Hunt for Advice afloat during the summer of 2020.

Hunt’s coaching business model went from mostly virtual to entirely virtual within a matter of months. Clients trickled in during the summer and fall, but then a big wave hit in the wintertime.

“That’s when things started to get really busy for all of us in the industry,” Hunt said. “For most of my clients, this was a very lonely year, but they used the time at home to work on themselves.”

Hunt described the NYC dating scene as recovering from the whiplash of having an abundance of choices in early March to being stuck at home alone for months. Hunt compared some of his client’s living situations to solitary confinement.

Singles were faced with many obstacles when trying to meet during COVID, but they adapted by embracing video technology and masked outdoor dates.

Many of Hunt’s clients took a slower pace when forming new relationships in 2020. Online chats were racing forward, video dates were the new normal, and meeting in person suddenly became a major milestone and a sign of commitment.

“Pre-COVID, you could go out and have a one-night stand every night if you wanted,” Hunt said. “Now, it’s so rare to meet new people that everyone is putting more weight and more intention behind each meeting.”

Dating sites and apps have taken different approaches to helping singles meet safely during the pandemic. Some platforms quickly released video date options, while others developed icebreaker prompts and questions about social distancing and masking attitudes.

The COVID-19 vaccine has proven to be a tricky subject in the online dating world. Hunt said he’s seen experts disagree about whether a dating app should be able to ask users if they are vaccinated. Some say it’s a responsible thing to do, while others say it violates HIPPA laws to ask a health question in a public forum.

“It’s going to be different for different areas,” Hunt said. “I really don’t think many singles want to go back to ‘how it was beforehand’ with the swiping and ghosting and breadcrumbing, but we need to force ourselves a bit to try and resume a sort of normality in the post-COVID world.”

From Bust to Boom: Highly Motivated Singles Hit the Scene

In 2021, the dating scene entered a new phase of reopening and renewed hope. Hunt referred to it as the Ready for Release era because so many singles came out of their lockdowns with clear eyes and eager hearts.

“This has been a really introspective year,” Hunt said. “People are interested in not wasting time anymore and being able to get the best outcomes once it’s finally time for everyone to mingle again.”

One of Hunt’s colleagues told him a story about a client named Sarah who decided to speed up her dating experience by asking for a 90-day exclusivity commitment from her first date. The guy agreed, and they got into a relationship without playing games or wasting time.

“There’s a hunger to get right to the marrow of the relationship,” Hunt said. “Knowing that there’s an exit strategy allows one to not get bogged down in the mire of tomorrow and allows for a truly visceral today experience. And you can have someone right there next to you sharing your oxytocin at our re-emergence into the post-COVID spring and summer.”

The Clubhouse app has facilitated online dating and networking.

The past year has been a whirlwind. On one hand, it has caused isolation and anxiety on a massive scale, but it has given rise to virtual dating experiences and innovative relationship arrangements unlike any seen before. Hunt said he’s eager to meet people’s demand for more engaging online connections. As the co-founder of TheArabCupid.com, he’s currently looking into opening a branch in Nigeria, Turkey, Egypt, Lebanon, Iran and Qatar.

The Clubhouse app has been an important ally in his efforts to unite singles in the Middle East and North Africa. Hunt said he has used Clubhouse to run drop-in audio chat rooms for up to 300 singles at a time.

“Clubhouse shot everything we were doing into the stratosphere, and at hyperspeed,” he said. “The reach and the outpouring has been phenomenal.”

Hunt and his business partner are also working on The Matchmaking Business Academy, which will host online courses for aspiring matchmakers and dating experts.

Hunt is now fully vaccinated and looking forward to seeing where the dating industry will go in the next year. How will the lessons of the past year impact the future of dating? Hunt has a few predictions. He told us that Zoom dates are here to stay and matchmaking is going to have its day in the sun when singles reenter the dating scene with new purpose.

“I think 2020 was the year of physical health, making sure we all didn’t die,” Hunt said. “And I think 2021 is going to be the year of mental health and of the matchmaker.

Much like Hunt’s newborn daughter, the dating world had to start fresh in March 2020 and learn new skills and lessons during months of living under lockdown. Dating experts like Hunt have helped singles find their footing amid the global pandemic, and now things are really getting up and running.

Whether they’re tackling video dates or committing to a 90-day relationship, singles can count on Hunt to offer straightforward, supportive, and savvy advice that gets to the heart of the matter.

Hunt said he’s impressed by the resourcefulness and determination displayed by many modern daters during difficult times. And he’s hopeful that COVID-19 will give rise to a new generation of singles who will continue to focus on self-improvement and seize virtual dating opportunities even after the pandemic is just a memory.

“As for what I’ve taken away from this pandemic and last year, I think we all saw the true worth of relationships,” Hunt said. “From family to friends to lovers, everything took more effort to stay connected, and we saw just how important that is to us.”