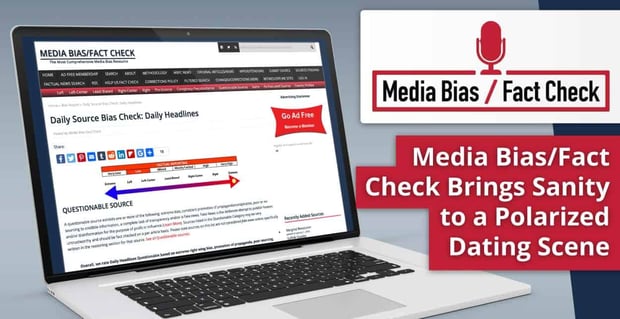 The Short Version: Since 2015, Media Bias/Fact Check (MBFC) has brought greater accountability to news media by identifying media biases and assessing the credibility of top headlines. Thanks to its meticulous reviews, MBFC can bring people together in the search for truth and objectivity in the daily news. Singles and couples can use this credible resource to challenge their own biases and start a fair-minded conversation with dates and partners about the issues that matter to them.

It was once considered taboo to bring up politics on a first date, but now singles will post things like “Swipe left if you voted right” or “No Bernie bros” on their dating profiles as a way of weeding out what they deem as incompatible matches.

Nowadays, voting records can be automatic dealbreakers for liberals and conservatives with strong, polarizing opinions. A growing number of Americans say politics is an important factor when choosing a spouse. As of 2014, about 74% of newlyweds said they married someone who shared similar political beliefs.

However, the couples brave enough to date across the political divide can benefit from having a rigorous conversation about the news of the day. They can challenge their partners to set aside personal biases and find common ground that goes beyond talking points and vitriol.

As a staunchly nonpartisan resource, Media Bias/Fact Check (MBFC) can help people identify fake news and discover cross-cutting truths in government and politics. Its daily headlines and news assessments can break through the talking-heads spin cycle, thus inspiring an evidence-based dialogue between couples with different points of view.

“I think it would be great for couples to look up their favorite sources on MBFC and talk about them,” said Dave Van Zandt, the Editor and Owner of Media Bias/Fact Check. “A liberal and conservative can have a strong and fun relationship. By using MBFC, perhaps they will agree to use only high factual sources.”

Dave is a registered non-affiliated voter with a communications degree and a passion for finding the truth. He founded MBFC as an independent news outlet that highlights evidence-based headlines and condemns deceptive news practices.

As the U.S. enters a presidential election year in 2020, Dave expects to see an uptick in people hunting for unbiased news sources and credible reporting, and his team is hard at work updating and refining the MBFC database to meet those needs and keep the electorate informed.

A Comprehensive Analysis of Bias in the Press

The late Senator Daniel Patrick Moynihan once said, “Everyone is entitled to his own opinion, but not to his own facts.” Politics is powered by opinions, but the layperson’s opinions are not always grounded in science, evidence, or even reason. Some people can lose objectivity by scrolling through hyperbolic social newsfeeds, watching biased news shows, and listening to self-styled experts who don’t have legitimate credentials or source materials to back their claims.

Media Bias/Fact Check aims to free people from confirmation biases and misconceptions by publishing detailed reports about the biases in the media. Its fact-driven materials can help readers figure out which media outlets to trust — and which to trash.

Dave sees extremism and misleading attacks on the right and the left, and he endeavors to cut through the noise by sticking to the facts. He points his readers toward highly factual news sources. Some of them have been deemed left-biased, and others are right-biased, but they share a common bent toward ethical reporting.

Media Bias/Fact Check offers a clear-cut guide to understanding the bias in news outlets, blogs, and other sites.

Reporters Without Borders recently downgraded the U.S. from satisfactory to problematic when it comes to journalistic freedom. A climate of fear, suspicion, and skepticism about the news media has pervaded the country, and accusations of “fake news” only add fuel to the fire.

“You don’t have to change the Constitution to limit free speech in the U.S.,” Dave said. “Through demonizing the media and convincing people that anything they disagree with is fake, it not only puts reporters in danger from attacks, but it also causes an electorate that is willfully ignorant of the facts.”

In the last couple years, MBFC has reviewed hundreds of news sources and offered clarity in a time of political upheaval, controversy, and partisan bickering.

Media Bias/Fact Check supports individuals in cultivating an informed and unbiased perspective on the world. The site makes it easier to challenge one’s opinions and verify claims about political issues. Recently, the site unveiled a country profiles section in which it assesses the political alignments of governments in 180 countries.

Couples who can’t agree about politics can turn to Media Bias/Fact Check to reorient their arguments toward the facts.

“We can only hope that we are pointing people toward more evidence-based media content,” Dave said. “It always comes back to evidence. Couples need to be able to provide evidence for their claims and positions.”

Catering to Educated Individuals With Different Points of View

Since launching in 2015, Media Bias/Fact Check has earned a stellar reputation among politically engaged individuals in the U.S. and abroad. The site sees over 2 million pageviews a month, and it has roughly 600,000 unique visitors. These visitors come from all walks of life, but a majority of them have graduated from college and are serious about staying informed.

“You are my go-to site for research (and for trying to get others to quit posting crap),” said Cindy in a comment on the MBFC Facebook page. “Thanks for all you do.”

It can be difficult for the average citizen to separate fact from opinion in today’s 24-hour news cycle, and that’s where Media Bias/Fact Check comes in. This site does not have an agenda other than uncovering truth and calling out pseudoscience, conspiracy theories, misreporting, and outright lies in the media.

“When calculating bias, we are not just looking at political bias, but also how factual the information is.” — Dave Van Zandt, Editor and Owner of MBFC

Dave said he believes Americans are tired of the endless drama and trumped-up controversies in today’s political climate, and he hopes to create a space where facts aren’t up for debate.

“I see fatigue and even greater division between the left and right,” he said. “We are adapting to this by continuing to be consistent. We are exposing the extremes and remain focused on producing the sober factual content that I truly believe people crave.”

Coming into 2020, readers can expect Media Bias/Fact Check to continue delivering evidence-based content and doing everything possible to ensure voters have all the information they need to cast their ballot.

Dave said it’s important for voters to consider the long-term consequences of the election, particularly in the judicial branch, and support candidates who best align with their values and stances.

“Ultimately, you will not agree with everything the candidates offer,” Dave pointed out, “and you must make a decision on the direction of the country. It literally is black and white — or, in this case, blue or red.”

In the last few years, Americans on both sides of the aisle have become entrenched in their viewpoints, and that has impacted personal relationships and dating on a fundamental level.

Couples can sometimes find it difficult to put aside their differences and agree to disagree about immigration, climate change, higher taxes, and other salient issues, but that doesn’t mean they should avoid having those tough conversations. They just need to go in armed with the facts and prepared to listen to the other side.

Media Bias/Fact Check can help people separate objective facts from partisan fiction and engage in meaningful discussions (not arguments) about politics. Its in-depth resources can provide a voice of reason that rises above the name-calling and finger-pointing of everyday politics and nudges the national dialogue in a constructive direction.

“We change by staying the same,” Dave said. “We will continue to produce the most accurate reviews we can and not let the hyper-partisan environment influence our mission. Just the facts.”