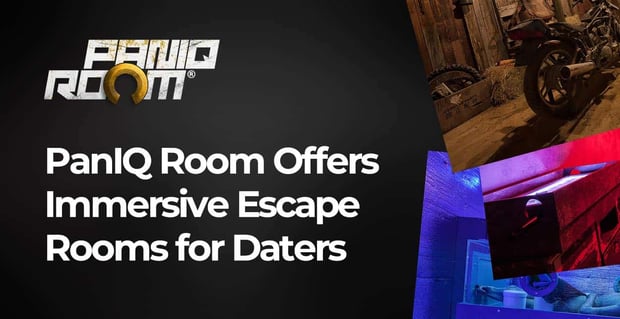 The Short Version: PanIQ Escape Room was founded in Budapest, Hungary, where the escape room trend originated, before expanding into cities across the United States. PanIQ offers a variety of rooms that transport daters into unique sci-fi or historical worlds. Couples can bond by working together to beat the clock and solve puzzles within an hour. Since expanding to Los Angeles in 2014, PanIQ has opened locations in many American cities, with plans for more soon.

Couples understand that, sometimes, they have to work together and focus intensely to solve their problems. Perhaps that’s why escape rooms are such popular outings for daters. They’re a fun way to gauge their compatibility in pressure-packed situations.

That may also explain why PanIQ Escape Room — with locations in Phoenix, Washington, D.C., Dallas, and many other cities across the U.S. — had 10 couples get engaged at its establishments in 2019 alone.

In Miami, the PanIQ team even helped one guest set up a memorable proposal in a themed escape room called The Pirate’s Den.

“Our Game Master created a custom prop treasure chest, which was nicely decorated with the ring inside. The last puzzle the couple solved together was the chest. After the proposal, the family was waiting outside in the lobby to congratulate them,” said Ákos Gábossy, CEO and Co-Founder of PanIQ Room.

The idea for the escape room originated as an online first-person puzzle game. But the popularity of those virtual games led people to translate them into real-world experiences.

The premise is that daters or groups of friends have an hour to escape a room. They must solve a series of puzzles within that time frame or face grave (but fictional) consequences.

In the early 2010s, the United States didn’t have many escape rooms. But PanIQ contributed to the explosion in popularity when it expanded from Budapest, Hungary, the birthplace of the escape room.

“We always wanted to bring this new concept of live entertainment to the U.S., and we opened our first escape room in Los Angeles in 2014. Our mission is to continually create new experiences that keep customers excited,” Ákos told us.

In addition to being creative spots for proposals, PanIQ’s rooms are also popular date night adventures. The company hosts more than 150,000 players each year and aims to establish rooms in every major American city.

PanIQ Founder Akos Gabossy was inspired by a surprising source to create his escape rooms: Chuck E. Cheese. The entertainment-oriented pizza chain spurred him to open two family venues in Hungary before setting his sights on adults.

“Escape rooms became the top tourist attraction in the Hungarian capital around 2011. It was a revolutionary moment in which an entirely new form of entertainment was born in front of us,” Ákos said.

Over time, PanIQ escape rooms have become more elaborate, and each room has an immersive theme.

For instance, in Wizard Trials, players must find a missing cat to become master wizards. The description of the experience reads:

“Diaphugius has left you alone in his tower with a single mission. His favorite familiar, the cat Mikla, has gone missing. You have been given one hour. If you can find her before your master returns, he will give you your very own spellbook and the title of … Assistant Wizard!”

Couples can match wits and test their compatibility with a PanIQ Escape Room adventure.

Ákos said that the PanIQ team’s goal is to create experiences that transport guests into new worlds.

“We strive to have our players leave reality outside for a while. Every element — from lighting to smoke effects — is carefully developed to enhance the player experience. That way, they feel like they are part of a movie or video game. But here, they are writing the script,” he said.

PanIQ also created third-generation escape rooms that integrate technology — including corridors that suddenly appear — to keep players on their toes.

“Our rooms have electronic locks, which allows for smoother gameplay and greater opportunity to surprise players with secret passageways and other unique features,” Ákos said.

For those looking to book a PanIQ escape room for a date, the first step is to choose the nearest location. PanIQ has rooms in many American cities, as well as in Hungary, France, Sweden, and Pakistan.

Next, guests can select the room that interests them most. For instance, those playing in San Francisco can choose from three room themes: Medieval Madness, Wizard Trials, or a spy-themed escape room called The Red Wire.

In The Red Wire, players must thwart an attack by tracking a suspected terrorist to his safe house in London. Then, they must put a stop to his plans before time runs out.

Players may also want to pay attention to each room’s level of difficulty. Couples who are new to escape rooms, you may want to choose a lower lock rating, which means that a room isn’t as difficult. But those who have mastered several rooms may prefer hard or expert options.

“We always have more escape room themes at our locations to offer a wide variety of games. The goal is to offer games that are suitable for first-time escapers and also to escape room enthusiasts,” said Ákos.

Guests don’t have to worry about getting stuck on a puzzle and wasting their entire hour.

“We have developed our own kiosk system, which interacts with the players during the game, offering visual hints whenever they get stuck with a puzzle,” Ákos said.

Escape rooms have exploded in popularity in the United States in the last five years. That’s because they offer a unique kind of entertainment that combines a theme park with complex puzzles. That is also why couples turn to escape rooms to spice up their date nights.

Completing an escape room with a partner can strengthen that bond and build communication and problem-solving skills.

“We are very proud of our unique marriage proposals where the ring is hidden in the final puzzle. Many couples have chosen PanIQ as a place to host their engagement parties over the years, and I hope our brand will have a special place in their heart,” Ákos said.

What’s more, an escape room is an affordable experience comparable in price to movie tickets and refreshments, not a dinner at an expensive restaurant and concert tickets.

PanIQ continues to push the boundaries of the escape room experience. The team has been working on a project on the Las Vegas strip that combines six escape rooms with a restaurant and bar.

“Due to the pandemic, the construction works were delayed, but we still hope to open our doors in 2020,” Ákos said.

PanIQ is also developing fourth-generation escape rooms that rearrange themselves after a team completes a game without an attendant’s help. That innovation will bring an entirely new escape room concept to the market.

“We wanted to create the No. 1 escape room brand from day one. We will not let the pandemic stop our momentum. Our goal is to open at least 10 new locations in the next two calendar years,” said Ákos.