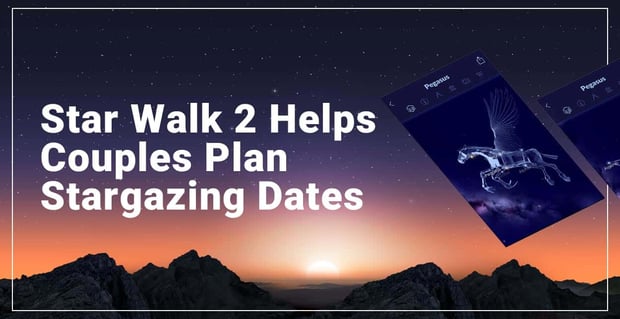 The Short Version: Many couples enjoy stargazing on date night, but they may not know what they’re looking at. Star Walk 2 makes the experience of observing the night sky together much more informative. The astronomy app provides real-time data about the planets, stars, and other celestial bodies that couples see when they look to the stars. The latest version, Star Walk 2, includes additional facts and blog posts that highlight upcoming events, including meteor showers, making it easy for couples to plan a stargazing date no matter where they live.

Cuddling together under a warm blanket while staring up at the stars can make for a great date night, especially when it includes a warm cup of tea or a bottle of wine. Curious couples also may use it as an opportunity to learn more about the vast universe.

But once they’re pointed out the Big Dipper, the North Star, and the moon, many people can’t identify what they’re looking at in the night sky. The Star Walk 2 app offers amateur stargazers an inside look at the nighttime sky, which can make for more interesting conversations.

The app takes stargazing to the next level by informing users about astronomy, orbital patterns, and even satellites. It shares knowledge about the billions of stars and galaxies, and the thousands of planetary systems in the universe. Regardless of where in the world a couple lives, each night offers a new perspective on the vast expanse of space the Earth occupies a tiny part of.

Once users download the app on their mobile device, they simply open it and point its camera toward the night sky. The app will share what’s visible in real time and any events in the sky that evening — depending on the location.

“It’s very romantic. When you discover a space object, it’s a great way to connect with someone and the universe,” said Daria Anufrieva, Star Walk 2 Spokesperson. “When you see a meteor shower, you can make a wish together on a shooting star.”

The Team Created the App From a Mapping Program

The origins of the Star Walk 2 app — available on iOS and Android — date back to 2001, when a team of technology experts started creating a mapping system for farmers and truck drivers. Around that time, someone suggested making a map of the sky, which they did. But nothing came of it until the iPhone started gaining popularity a few years later.

The developers recognized the value of their star guide, so they spent eight months building the app before launch. They used the internal tools nearly every modern smartphone has, including a gyroscope and a compass.

Users can point their device to the sky and see constellations and many other celestial bodies in real time.

Despite the app’s significant success, its team remains small. Star Walk 2 has about 20 people working behind the scenes sharing astronomy news and ensuring the underlying science is accurate.

“They are all happy to be a part of this huge community because we have a lot of users for our applications,” Daria said. “They grew up as developers and also scientists knowing all things about astronomy.”

The app’s users are mostly men ages 25 to 44. The number of users varies widely by season since fewer people spend time stargazing on winter nights. In October, the Star Walk 2 app boasts about 3 million monthly users, and in the summer, it has closer to 5 million each month.

Daria said that, when she started working with the company, she asked the team if it had considered how romantic stargazing was on a date night. She said they already knew that astronomy was a great way to impress a special someone.

The app’s ease of use is, in part, why it has seen so much success. A user simply clicks the camera icon in the upper right-hand corner of the app to get started.

“You tilt it up when you open the application, and Star Walk 2 will follow your movements and show celestial bodies in real time,” Daria said.

To find a specific object, users can search using the magnifying glass icon in the lower left-hand corner of the screen. The result displays on the screen in real time.

Daria said novice astronomers often want to know if any celestial events are happening, and the app helps with its “Visible Tonight” section.

“It shows the planets, constellations, and stars that are visible, and the ‘What’s New’ section has articles each week to inform users about the most interesting events in the world of astronomy,” Daria said. “If you cannot observe it with your own eyes, we’ll tell you how, where, and when you should look.”

Nick Rhodes of The Daily Mail, praised the app in an article.

“It’s brilliant, and if you’re ever somewhere with a clear sky and no light pollution, it’s a revelation,” he said. “It’s beautifully designed and makes clever use of the available technology. I’m fascinated by astronomy, but even if you’re not, give this a go.”

“It’s jam-packed with imagery and data on the 200,000 stars and planets in its database, and has a calendar so you can keep track of interesting celestial events,” she wrote. “I particularly like the beautiful imagery it uses to show constellations and detail on the planets.”

Daria said users frequently ask that the app include a place where people can open up a picture of an engagement ring because so many people propose while stargazing on a date. While Start Walk hasn’t included the romantic addition yet, the team is considering it.

The Star Walk blog is filled with suggestions for new stargazers, including how to watch the sun and moon as they move across the sky. Articles make it easy to learn about the lunar phases and how the location of celestial bodies changes throughout the seasons.

In summer 2021, the team behind Star Walk 2 plans to launch a complementary app for stargazing — although Daria said she can’t release too many details yet.

“This application is based on feedback and wishes of our users from the App Store and social media,” she said. “It’s also based on our own feelings. Now, we want to add modern technologies and include that knowledge in the app.”

The Star Walk 2 app offers plenty of special touches that users are often delighted to find. For example, there is a compass icon in the upper lefthand corner of the app that’s a working compass.

In winter, users enjoy that the developers add Santa Claus into the app so families can track him as he delivers presents across the sky.

“At Star Walk, we like attention to detail,” she said.