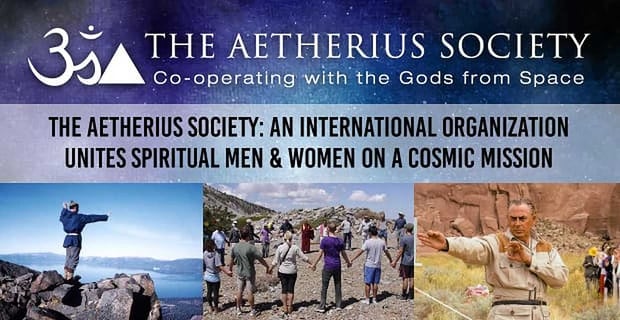 The Short Version: In 1954, Dr. George King received a message from the unknown calling on him to bring peace to the world and expand man’s understanding of the universe. He founded a nonprofit organization called The Aetherius Society to share the teachings of an otherworldly intelligence and help open-minded individuals embark on a journey of spiritual awakening. For decades, the Society has collected positive energy from hundreds of followers and friends who care deeply about making the world a more loving place. If this humanitarian mission speaks to your values, you can learn how to serve the cause by getting involved in a local chapter in the US, the UK, Canada, Australia, Japan, Sweden, and other countries worldwide. From weekly prayer sessions to yearly pilgrimages, The Aetherius Society taps into a cosmic knowledge and spiritual power that is beyond belief.

Love is a mysterious force in the universe. Love connects people, motivates actions, and gives meaning to millions of lives. While we may not always understand it, love is essential to what it means to be human and what it means to be alive. Richard Lawrence, the Executive Secretary of The Aetherius Society for Europe, compared love to water in one of his sermons: “Just as life as we know it on Earth could not exist without water, nothing in the universe could exist without love.”

The Aetherius Society is a longstanding religious organization centered around spiritual understanding and humanitarian acts. Members of the Society believe in a higher calling to serve humankind by collecting and sending out positive energy. In 1955, a visionary yoga master named Dr. George King founded the international spiritual society after he received telepathic communications from a higher alien intelligence. He believed it was his duty to share the being’s hopeful message of compassion, peace, and love.

Members of The Aetherius Society believe collective spiritual energy can change the world.

Today, The Aetherius Society has a presence in London, Los Angeles, and several cities around the world. Its members frequently come together to spread loving and healing energy in their communities and throughout the globe. If you feel drawn to this sacred mission, you can go to a lecture, attend a pilgrimage, or get involved in the other healing rituals of the nonprofit organization. Everyone, no matter their background or beliefs, is welcome to take part in The Aetherius Society’s efforts, enhance their spiritual understanding, and find a higher purpose in life.

“From the get-go, our main tenet has been service to the world,” said the Reverend Oscar E. León of The Aetherius Society. “We’re here to try to send as much high spiritual energy to the world as we can.”

In May 1954, a message came to Dr. George King, who was a master of yoga and a trance medium, while he was in his flat in London. A gentle, yet firm, voice outside his body said to him: “Prepare yourself! You are to become the voice of the Interplanetary Parliament.”

Now, George had never heard of an interplanetary parliament, but the ethereal words left him stunned. He knew he hadn’t imagined them, but he couldn’t fathom what they meant. He spent the rest of his life endeavoring to realize the plan set forth by that prophetic initial contact. Although he couldn’t explain why, he said he understood without question that he had been contacted by an alien and powerful force to help bring humankind back from the brink of destruction.

By growing his spiritual understanding and forging telepathic channels, George heard many other messages from the extraterrestrial communicators, including a Venusian Master called the Aetherius, which is a Greek word meaning traveler through the ether.

George officially began The Aetherius Society in 1955. His goal was to spread the teachings of the alien gods and lead others down a path of enlightenment and peace. The organization has since grown into an international movement encompassing hundreds of souls dedicated to living and loving on a higher spiritual level.

You can read the incredible story of Dr. George King’s life work here. As George himself said, “I do not ask the unbeliever to believe at once, but only request that he applies that which Aetherius says to his own reason.”

What ties members of The Aetherius Society together is a strong, heartfelt desire to help others and make the world a better place. People from all walks of life, from Quakers to atheists, find their way to The Aetherius Society. “Our members come from different backgrounds and with various degrees of spiritual advancement,” Oscar said, “but they all share the inner knowledge or urge to be of spiritual service to the world.”

The organization makes it easy for newcomers to get involved by welcoming them to attend divine services or prayer rituals. All week long, members can immerse themselves in the sermons, lectures, workshops, and spiritual undertakings of the Society. You can look up events online and find out when your local chapter convenes. The educational and friendly atmosphere encourages men and women to take part in the visualizations, mantras, and prayers focused on fostering world peace.

“It’s all very positive,” Oscar told us. “We have lots of dynamic prayers and traditions used to purify the spirit and heal the world.”

Throughout the year, The Aetherius Society organizes pilgrimages to holy mountains in the British Isles, the US, New Zealand, Africa, and Europe.

One of The Aetherius Society’s most time-honored traditions is its pilgrimages to holy mountains that contain large amounts of spiritual energy. The organization recognizes 19 mountains charged with immense spiritual significance. Since 1959, hundreds of members have traveled to the mountains to recharge and advance their spirits.

During times of crisis, the Society draws from these holy sites to release positive energy into the world to counterbalance natural disasters, wartime conflict, political upheavals, and other human catastrophes.

“Anybody of any degree of advancement can go to the mountains and engage in a selfless act of service to contact the spiritual energies contained within it,” Oscar told us. “The experience varies from person to person, but it is always very positive and uplifting. People of all faiths, or no particular faith, are welcome to join these pilgrimages.”

From California to Australia, hundreds of thoughtful individuals have become followers of The Aetherius Society and found common ground with spiritual people who share similar beliefs. Sometimes the organization has even fostered committed romantic relationships.

The Aetherius Society welcomes members and friends from all walks of life.

Oscar told us he met his wife at an Aetherius Society event. She was a friend of one of the members and attended an Operation Power Prayer event because she was curious about the Society. Her genuine interest and positive attitude caught Oscar’s attention. He told us he values her ability to understand his beliefs and share his goals.

Now they’re happily married and committed to the same cause of promoting peace throughout the world. “She recognizes the importance of serving humanity,” he said. “Our relationship has been invaluable to my own spiritual development. It’s been a blessing in so many ways.”

Through The Aetherius Society, countless kind-hearted individuals have found community and companionship. The organization breaks down barriers between people and encourages connecting on a higher spiritual plane.

“It’s very important at this time in our history to bring people together and reach beyond borders,” Oscar said. “At the forefront of The Aetherius Society’s teachings is that we are one human race, and we need to cooperate more with one another.”

“Love is an all-permeating energy, which is above mind,” Dr. George King once said in a sermon. “It is the great energy of the cosmos.”

Although George passed away in 1997, his essential message lives on in The Aetherius Society. The desire to do good, share love, and unite humanity drives the organization forward, and now a new generation of spiritual individuals have stepped up to lead the Society in the 21st century.

Through regular sermons, pilgrimages, and other holy endeavors, The Aetherius Society has furthered the spiritual journeys of hundreds of people around the world. Anyone can connect with people in this community and find value in its teachings of love, peace, and acceptance.

“It’s a cosmic mission, but it’s open to everybody,” Oscar told us. “Our members, visitors, and sympathizers share a desire to serve and help heal the world through a greater cosmic understanding of the universe.”