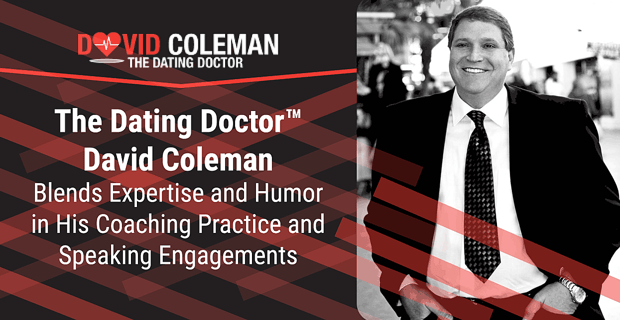 The Short Version: David Coleman is known as The Dating Doctor because he provides holistic and practical advice on many issues daters may face. He began his career as a motivational speaker and continues to speak to audiences of all ages at several events each year. For more than 10 years, David has also offered his wisdom to individuals and couples as a dating and relationship coach. He’s a witty and straightforward voice of reason, which is why his philosophy on dating, sex, and relationships is: If you don’t laugh, you’ll surely cry.

At speaking engagements across the country, David Coleman, aka The Dating Doctor, gives listeners useful advice right off the bat. After all, his goal is to provide daters with tools and advice they can implement in their lives immediately after they leave.

“First, I teach them about the ABCs of Initial Interest,” he said. This is a checklist to determine if you’re truly connecting with a person. Sometimes, David suggests, we’re too willing to give someone a second — or third or fourth — chance, even when we’re clearly not quite clicking. Luckily, you don’t have to remember the whole alphabet — rather just the first five letters.

“After meeting this person, think about your energy level. People can steal your energy, and you’re like ‘Whoa.’ But, then, some people will spike your energy,” David said.

David added that this checklist is pretty simple and many clients can implement the practice in their lives right away. “So many people say they can’t believe how often they use the technique in love, friendship, and even business,” he told us.

Because of his no-nonsense approach and practical advice, David has become a popular speaker and coach. He’s been named Speaker of the Year (on multiple occasions) and Entertainer of the Year by Campus Activities Magazine. After having enormous success as a speaker, David decided to pursue dating and relationship coaching to help individuals and couples on a more direct and personal level.

A Popular Speaker for Any Type of Audience

David didn’t set out to help people interact more easily with each other, but, because of his natural tendencies, his life ended up going in that direction.

“I used to meet people fairly easily, but my friends could not,” he said. “Through me, some of my friends would meet other people, and they would ask, ‘Do you have any ideas to help me?’ I did, and they started working.”

He became The Dating Doctor — an award-winning speaker — out of the same type of serendipity. While working as an activities director at a college, David gave an entertaining presentation at a major conference about the do’s and don’ts of dating. His speech was so well-received that colleges stormed him saying they’d love to pay him to speak on their campus.

Even after thousands of shows, David doesn’t get tired of sharing his advice, and his audiences don’t seem to get tired of listening. That’s likely because he’s always changing up what he’s discussing, often based on the responses and questions he receives from audiences.

“I appreciate being someone who coaches others and is an advocate for their success. I’ve had people call me years after they talked to me and ask, ‘Can we have a refresher?’ I love that.” — David Coleman

“What I discuss is always balanced, timely, and relevant,” he said.

Often, the material for his speaking engagements comes from questions his audience asks him. During each talk, he has a question-and-answer session in which audience members can either ask questions themselves or write them onto a notecard if they want to remain anonymous.

“Sometimes, during the questions and comments portion, I will go ‘Bing!’ and I’ll discover a new topic or area and realize something must be trending,” David said.

Today, many of those trends involve online dating, and David discusses some of the common mistakes people make. These include what he calls “Proximity Error,” a situation where compatible matches may be dismissed because they’re too close to another profile on the page that catches a user’s eye.

Another mistake is “The Cut and Paste Disgrace,” which is an online dater who simply pastes the same remarks to every potential mate they contact. David said this dater is often outed when they use a name or location that has nothing to do with the person whom they’re contacting, which can be awkward and embarrassing.

As with the ABCs of Initial Interest, David wants to ensure that his audiences can use the information they glean from him immediately.

“I hope that, by sitting in my audience, they’ll avoid saying the wrong thing to someone in their life or sending a disastrous text,” he said.

David has always known a thing or two about charisma, confidence, and attracting others. Those innate skills — and his ability to explain his methods to others — led him to become a coach.

As a dating and relationship coach, he’s worked with clients of all ages — from those in their 20s, who may have seen him perform on their college campus, to older adults who are baffled by the online dating scene.

“Clients in their 50s, 60s, or 70s have walked up to me and said they need my services. I was recently helping a 70-year-old man who was getting back into dating after the loss of his wife,” David said.

David has seen his fair share of clients get married.

One client named Sharon came to David after hearing him on a radio show in 2015. She had been divorced since 1993 and decided to begin dating again. With David’s guidance, Sharon met her special someone, Scott, and they married in October 2018.

“I can look back now and easily connect the dots from learning what I did not want to finally finding and recognizing what I knew I did want,” Sharon said. “I credit David for helping me along that journey — I learned a lot from him.”

Much like when he’s on stage, David is upfront with his individual clients and encourages them to stay accountable. Whenever he takes on a client, he starts by asking them to search their soul to unearth the type of partner they’re looking for.

He wants them to be honest with themselves about how hard they’ve worked to find a compatible date. Have they put in a concerted effort or not?

“I ask them what health they find themselves in — mentally, physically, spiritually, and emotionally,” David said. “I help them figure out what they’re looking for and what they’ve done so far to meet someone. Then, we go from there.”

David makes himself highly available to his coaching clients, catering his services to what works best for them and their schedules. For example, he’s willing to communicate with his clients through any medium they desire, including Skype, phone, Facebook Messenger, and text, as well as face-to-face encounters.

“We set parameters on time and day,” he said. “It’s not 24 hours a day, but it’s quite often, because dating, relationships, romance and sex doesn’t keep a set schedule.”

He’s also developing a new dating and romance podcast with a friend who’s been in the radio business for years. David believes the format can reach many more people who have questions about dating.

“We have completely different personalities,” he said. “It’s angel and devil; fire and ice. But we’re both brutally honest, and I think our takes will be exceptionally entertaining.”

David Coleman: Keeping Up With the Dating Trends

David is a sought-after coach and speaker because his style appeals to those seeking dating advice and humor. He puts audiences and clients at ease and helps them understand the inherent truths of dating with an open mind.

“I am honest, direct, inclusive, and humorous. I don’t mince words or waste time, it is far too precious,” he told us.

As David continues developing his techniques, he has two timely topics he wants to address: how to end and move forward from a toxic relationship and how to truly connect with someone in the ever-changing digitally-focused dating world. He finds it rewarding when one of his clients or an audience member writes him to say that they found the courage to leave a toxic relationship.

David is motivated to continue developing new resources because he’s passionate about showing people how to improve their dating lives and relationships.

“I appreciate being someone who coaches others and is an advocate for their success,” he said. “I’ve had people call me years after they talked to me and ask, ‘Can we have a refresher?’ I love that.”