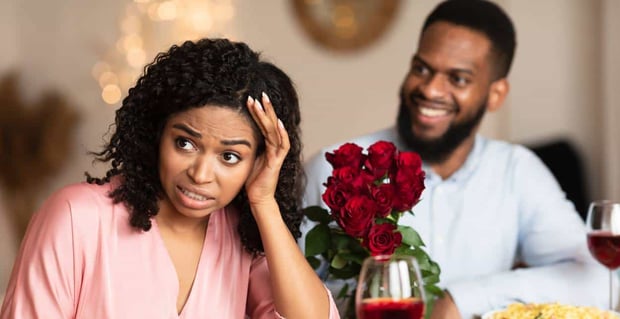 Everyone has a bad first date story. I mean, we are all learning when we start dating!  One of my worst was meeting a woman on a dating show called “Hooking Up,” circa about 2005.  She seemed cool online, but when we met, we could tell instantly that it wasn’t a good mix for either of us. The problem was, the show set us up and needed to film for HOURS, so we just had to grit it out. That’s the day I learned: Don’t tell jokes that involve loud animal sounds when you’re on TV because they’ll edit everything out and just leave you making out-of-context farm sounds. Not great.

Yes, most of us are going to be nervous and maybe slightly awkward on a first date, but you can do lots of things to make the situation more comfortable and enjoyable. Start by not blurting out a dumb comment…or animal sound…that will sabotage your chances. Even if you have the best of intentions, there are some things that you should never say on a first date.

1. Don’t Talk About Your Ex

This piece of dating advice makes almost every list of “first date don’ts” because it’s really important. I want everyone to know: Never talk about your ex on a first date. It’s a big red flag that signals you are not ready to date yet. If you’re still hung up on your ex, you’re not relationship material. Most women have no desire to compete with your dating history.  You may have some very strong feelings about a recent heartbreak, rejection, or betrayal, but now is not the time to discuss it. You will have plenty of time to get into deep conversations as you continue to date a new person.

The best way to comment on your ex or your last relationship is to memorize one or two sentences that you repeat whenever anyone asks you about it in a casual conversation.  “My last relationship ended about a year ago as we realized we were just both heading in different directions. Now I’m happily focused on where I want to go.”  1.

2. Don’t Get Too Personal Too Quickly

It’s normal to wonder if your new romantic connection is going somewhere or if this is your last first date. Dating someone new could be the start of something wonderful and lasting, so you naturally want to know all about this person. However, the main purpose of a first date is simple: Get a second date. Do not interrogate a perfect stranger about all their deeply held beliefs, quirks, or dealbreakers.

You’re not there to see if this person is marriage material. You’re there to make a good impression and land a second date. I know that it is tempting to want to learn as much as possible about a new person before you invest your time and emotions, but that could disrupt the natural rhythm of the dating experience. Acting overly curious or interrogatory isn’t going to work to your benefit.

Daters need to move through four emotional levels when forming a relationship: social (“Hi, did Alyssa invite you to this party?”), connection (“You played intramural sports with her in high school? I played with her in college!”), comfort (“I’m sorry Alyssa is being weird — I think you look amazing tonight.”) and intimacy (“It’s so sad that Alyssa always felt she had to be in competition with you. That must have been tough to have a frenemy like that”). When you first meet it’s about moving from social to connection. Just to see if there is some chemistry there. Keep it light and friendly.

Some things just never need to be said. Things like “How can someone as pretty as you not be in a relationship?” and “Who would ever divorce you?” and “So why are you still single?”  Ugh, these questions are huge turn-offs. There’s no right answer to them, and we can accidentally shoot ourselves in the foot trying to find one. Imagine you’re going to the doctor, and she asks you, “Why aren’t you healthy?” Um, I don’t know, I’m trying my best over here!

You never know what a woman’s story is either. Maybe she had an abusive ex, maybe she lived a sheltered life and is finally stepping out, maybe her last partner died. Whatever the reason is, it’s not going to be a good or pleasant story. And reminding a woman of her failures and sadness and regret is definitely not an aphrodisiac. You’re also single so don’t judge lest you be judged in turn.

Oh man, I can’t even believe I have to say this, but I just had this issue come up with my last client — in 2022!  I don’t know if it stems from some misguided belief that ordering for a woman demonstrates confidence or something, but it’s a BIG no-no. Don’t tell a woman what she wants to eat, and don’t order on her behalf.

To be clear, you can suggest a certain dish and tell her, “It’s not to be missed!” But leave the decision to her. If you want to take a gentlemanly route, you can discuss what she wants first and then take the lead by telling the server what the lady is having.

Ordering for a woman without her input is not only misogynistic but infantilizing. Not a good look for a first date. Don’t be this guy.

5. Don’t Tell Her How Much You Already Know About Her

Look, we are all guilty of Facebook stalking or Googling someone to learn more about them. If you’re curious enough (and perhaps bored enough), you can learn a lot about a person by browsing their social media profiles and online footprint. Sometimes it’s just innocent fun with no harm done. But for daters it can be hazardous. I know that it’s hard not to do some hardcore searching when you have a new crush. So while I’m going to say, “don’t look up too much about them before the date,” I know that’s an uphill battle.

What I will say is to make sure you don’t tell them about your cyberstalking ways. Maybe you  think you are showing how interested you are in her. But it’s going to come off creepy and stalkery. Suppose you found out during your research that she has won awards for equestrian show jumping. You don’t say, “I saw in 2002 you won the under-18 steeplechase event at the Maryland Hunt Cup. That’s cool!” She will gallop away from you so fast.

Instead, find a way to bring things up more casually. Maybe share a story about a sport or event you did in high school and then ask, “What about you? Did you do any hobbies or sports in school?” Then she can share her story on her terms.

In healthy relationships, we strive to make the other person happy. Sincere compliments are necessary to that goal, but sometimes complimenting too much can come across as generic or insincere. I know as men we hear a lot of dating advice about giving women compliments to show interest in her. That’s good advice, but it should be tempered and genuine. It shouldn’t just be willy-nilly and unreciprocated.

For example, don’t keep saying, “Man, you are just so pretty” or “You’ve got a lovely smile” over and over. Not only does that get old quickly, but it says to a woman that you aren’t listening to her. Now she’s wondering if you are just zoning out looking at her physical appearance. Women typically receive a lot of compliments or comments on how they look, so they often know how to spot the canned lines and player moves.

Avoid First Date Blunders by Thinking Before You Speak

Men can sometimes do and say a lot of crazy stuff trying to get women to like them. They can accidentally offend a woman’s friends by saying “Everyone at this party sucks except you,” or they can embarrass themselves on television by making animal noises.

The rules of what to say and what not to say on a first date aren’t incredibly clear-cut because everyone is different. But generally speaking, you should do your best to come off as a confident, positive, and genuine person — not a hater or a faker. Don’t bash anyone. Don’t talk about past breakups, controversial issues, or sensitive subjects. Keep the conversation light and give yourself room to grow in affection and commitment over time.

Because we are crazy and irrational beings, this list of things not to say on a first date could go on and on. I could enumerate all the impulsive, rude, or dumb things that people intentionally or unintentionally do to tank their chances on a first date. A little social awkwardness is understandable — naturally, nerves can get the best of us at times — but you will do yourself and your date a big favor if you lead with your heart, respond to her energy, and try to have fun.

6 Topics to Avoid on a First Date

5 Surprising Things Women Notice About Men on a First Date